Fed meeting minutes: What to know this week

Investors will return on Tuesday to a holiday-shortened week, with the stock market closed Monday in observance of the Fourth of July in the U.S.

The central focus of the week will be on a handful of economic data reports, including the minutes from the Federal Open Market Committee's (FOMC) June meeting. These are set to help give traders a better sense of when Fed officials might begin tapering their crisis-era asset purchase program and raising benchmark interest rates from their current near-zero levels.

The Fed's June meeting several weeks ago marked a notable shift in the Fed's outlook, with the central bank's updated Summary of Economic Projections reflecting both increased GDP and inflation expectations and the possibility of two rate hikes by the end of 2023. In his press conference following the June meeting, Fed Chair Jerome Powell also said it was time to "retire" the notion of "talking about talking about tapering," since the central bank had in fact begun to contemplate the timing of such a move.

"The mid-June meeting saw a range of officials bring forward projections for interest rate hikes and [the minutes] will probably reveal several stressing the upside risks to their relatively benign inflation forecasts," Andrew Hunter, senior U.S. economist for Capital Economics said in a note Friday. "This was also the meeting at which Chair Jerome Powell finally admitted they began 'talking about talking about' tapering."

In Wednesday's Fed meeting minutes, "We may see some clarification of what would constitute 'substantial further progress' towards the Fed’s goals," Hunter added. "Comments from a range of officials following the meeting leave us comfortable with our view that most won’t judge that to be the case until late summer/early fall, with tapering announced around the time of the Jackson Hole summit or the September FOMC meeting."

Last week, a couple Fed officials made public remarks that hinted that the conversation around tapering was picking up faster than Powell had articulated. Dallas Fed President Robert Kaplan told Bloomberg on Wednesday that, "We'll be far healthier sooner rather than later to begin" tapering, adding that the economy was likely to meet the "substantial further progress" threshold the Fed has set toward recovering faster than he expected.

"These purchases are very adept at stimulating demand, but we've got plenty of demand," he said. "Our problem is supply, and these purchases are not very effective when you've got a supply issue. And so that's a factor that tells me that as soon as we can get to 'substantial further progress,' we'll be healthier to wean off these purchases." 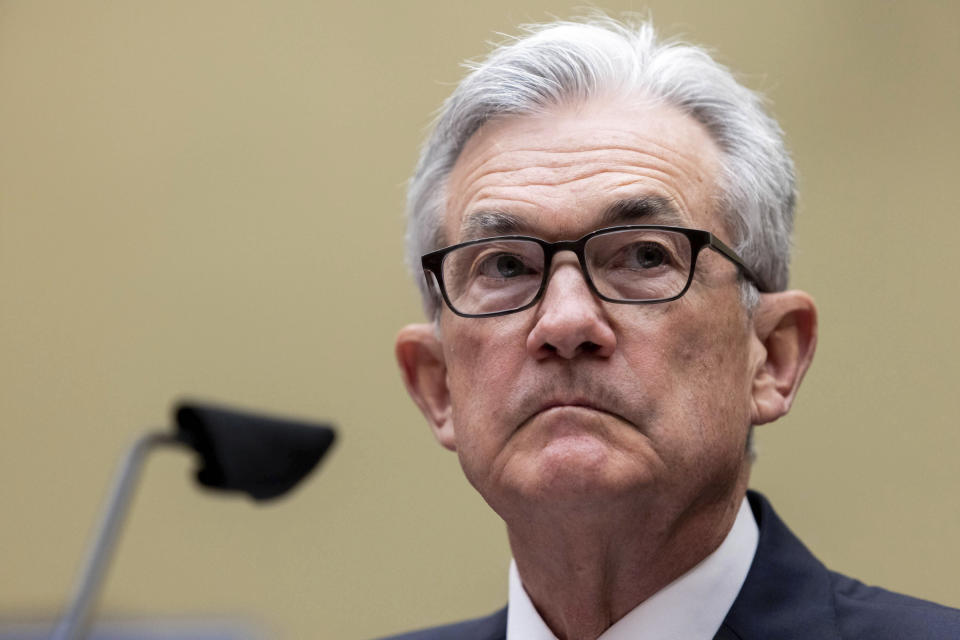 Federal Reserve Board chairman Jerome Powell testifies on the Federal Reserve’s response to the coronavirus pandemic during a House Oversight and Reform Select Subcommittee on the Coronavirus hearing on Capitol Hill in Washington, Tuesday, June 22, 2021. (Graeme Jennings/Pool via AP)

And also last week, Fed Governor Christopher Waller told Bloomberg he believes it would be "appropriate to start thinking about pulling back on some of the stimulus." On prospects for a 2022 rate hike, he added he was "not ruling it out." The comments stood out as particularly notable coming from Waller, a presumed "dove" who has typically favored more accommodative monetary policy among his Fed peers.

Importantly, the Federal Reserve's meeting minutes will not take into consideration the June jobs report, which came out last Friday after the Fed's last meeting. Still, the report — which reflected the biggest monthly payroll gain since August 2020 and an acceleration in average hourly earnings over last year — may be mentioned in forthcoming Fed commentary as a step toward "substantial further progress."

For Bank of America economist Michelle Meyer, three themes will be in focus when reviewing the Fed's forthcoming meeting minutes: the path for tapering, the Fed's level of concern around persistent inflation, and the central bank's views on the recovery in the employment-to-population ratio.

"We expect the minutes to reiterate the language from Chair Powell that a plan for asset purchases could be announced at an upcoming meeting depending on the data," Meyer said in a note Friday. "It will be interesting to learn about the variables Fed officials are monitoring to determine how persistent inflation may prove to be. We expect a discussion about inflation expectations and a mention of some of the categories driving up inflation."

And in terms of the labor market, "A clearly stated goal of the Fed has been to recover to the pre-COVID level of jobs," she added. "However, constrained labor supply has presented challenges. It will be noteworthy if the minutes give a sense of how close to the pre-COVID level would be acceptable to declare substantial progress."

The Institute for Supply Management Services index for July will also be in focus this week, with the latest print slated for release on Tuesday.

The index is expected to have moderated to a reading of 63.6 in June from 64.0 in May, which had been an all-time high in data going back to 2008. Readings above the neutral level of 50.0 indicate expansion in a sector.

The ISM Services Index comes as broader business reopenings and stronger consumer mobility and demand trends have stoked a pick-up in activity, especially in leisure and hospitality. However, supply constraints are weighing on the pace of the recovery, especially in terms of finding workers. The employment subindex in ISM's Manufacturing index last week fell into contractionary territory for the first time since November, reflecting the impacts of these scarcities.

IHS Markit's flash composite purchasing managers' index last week also lowered the bar for the ISM print this week. That firm's preliminary monthly services business activity index fell to a two-month low of 64.8 for June from 70.4 in May.

"Struggles among companies to find suitable workers hampered employment growth in June," IHS Markit said in its release. "Although strong, the rate of job creation was the slowest for three months. Pressure on capacity was reflected in a solid rise in backlogs of work."

"At the same time, inflationary pressures remained elevated in June," the firm added. "Service providers stated that wage costs and additional transportation fees pushed up cost burdens, which rose at the second-fastest pace on record."