Fed decision, retail sales: What to know this week

One of the main focuses for investors this week will be on the Federal Reserve's June policy decision. The central bank's statement and press conference are set to help clarify the path forward for monetary policy as investors contemplate the staying power of higher inflation. A number of key economic data releases are also scheduled for this week, including May retail sales.

The Fed's monetary policy decision and press conference from Fed Chair Jerome Powell will take place Wednesday afternoon. The focal points for investors will be around commentary about the strength of the economic recovery, and remarks that might suggest when the central bank will begin tapering its crisis-era asset purchase program. Currently, the Federal Reserve is conducting these purchases at a rate of $120 billion per month, with this quantitative easing having served as a key tool the Fed used to provide support and liquidity to the economy during the pandemic.

Heading into the June meeting, a number of Fed officials suggested it may be time to at least begin discussing tapering. Federal Reserve Bank of Cleveland President Loretta Mester, Philadelphia Fed President Patrick Harker, and San Francisco Fed President Mary Daly have been among those saying the Fed could at least begin "talking about talking about" tapering, given signs of renewed economic activity.

Others including Federal Reserve Bank of St. Louis President James Bullard, however, have held firm that the economy was "not quite there yet" to warrant serious discussions of policy changes. Powell, for his part, has made clear that central bankers would telegraph their intent to taper before actually beginning the process.

Recent data have suggested the U.S. economy is inching toward the thresholds necessary to prompt the Federal Reserve to begin tapering, albeit with some distance still to go before triggering such a move.

The May jobs report showed that more than half a million jobs came back last month and that the unemployment rate dipped to a new pandemic-era low. However, the economy is still more than 7 million jobs short of its February 2020 levels, and joblessness still remains elevated – offering the Fed justification for a still-accommodative tilt to monetary policy. The central bank has targeted reaching maximum employment and price stability, with some flexibility on the latter target to allow for a period of above-target inflation to compensate for years of undershooting.

“The Fed needs to have flexibility. This is true in the past. And it is absolutely true right now. They are going to watch the data, watch the world unfold, and adjust,” Claudia Sahm, senior fellow at the Jain Family Institute and former Federal Reserve economist, told Yahoo Finance. “I think, at this point, markets are starting to figure out what the Fed's plan is. It's a new one. It has some risks attached to it. But they are going to bat for workers, because they have a dual mandate. And we are millions of jobs short.” 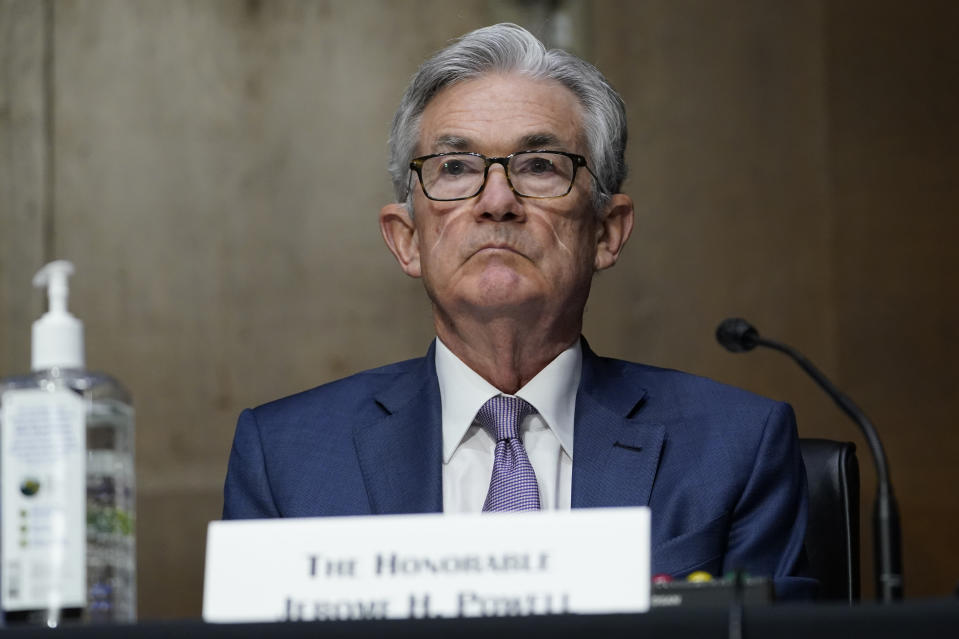 FILE – In this Dec. 1, 2020 file photo, Chairman of the Federal Reserve Jerome Powell appears before the Senate Banking Committee on Capitol Hill in Washington. A Federal Reserve survey has found that the economy was rebounding in late February through early April, helped by billions of dollars in a new round of stimulus payments and the stepped-up rollout of coronavirus vaccines. The new survey released Wednesday, April 14, 2021 showed that the Fed’s business contacts around the country were expressing more optimism about the economy’s outlook as activity accelerated. (AP Photo/Susan Walsh, Pool)

On the other hand, rising inflation and price dynamics also make a case for tightening policy, especially if these trends prove long-lasting. Supply chain issues and difficulties finding qualified workers to fill a record number of job openings during the recovery have pushed prices higher across a range of goods for both consumers and producers. Core consumer prices, as measured by the Bureau of Labor Statistics' consumer price index excluding food and energy prices, surged by 3.8% year-on-year for the fastest rise in nearly three decades, though some of this gain came as a result of "base effects" off last year's pandemic-depressed lows.

And inflation expectations among consumers have risen sharply compared to several months ago, with consumers expecting inflation of 4.0% next year and of 2.8% in five years, according to the University of Michigan's consumer sentiment index. The Federal Reserve, however, has so far reiterated it believes inflationary trends will be transitory and ease once year-over-year comparisons pass the worst points of the pandemic last year.

"The Fed will likely continue to talk about 'transitory' inflation at next week’s FOMC meeting, but with doubts starting to creep in from various Fed officials we suspect the Jackson Hole Conference in late August could be very interesting," James Knightley, chief international economist at ING, wrote in a note. "This could see a shift in language that really opens the door much wider to a December QE taper announcement."

"With the economy roaring back, jobs returning and inflation likely to remain higher for longer we continue to see the risks skewed towards an earlier interest rate rise," he added. "The Fed is still saying early 2024, but we think early 2023 is more likely and it could come even sooner."

The May retail sales report from the Commerce Department will be among the major economic data reports out next week, offering a look at how consumer spending trends have shifted with the economic recovery now well under way.

Consensus economists expect retail sales will decline by 0.7% on a month-over-month basis. This would be the first monthly drop in retail sales since February, reflecting more moderation after an exceptionally strong 10.7% monthly rise in March. That, in turn, had been aided by the distribution of stimulus checks under Congress's last coronavirus relief package, giving many consumers a short-term boost to spending power.

In April, retail sales came in unchanged on a month-on-month basis. Under the hood, however, some of the categories that had seen some of the strongest rebounds during the reopenings gave back some advances. Clothing and clothing accessories stories, for instance, saw sales drop 5.1% in April over March, though these sales were up by more than 700% on a year-over-year basis, when lockdowns were rampant across the U.S. A similar dynamic played out for sporting good and hobby stores, and food and beverage stores saw sales slow markedly from March.

Other industries saw sales rise more markedly. Auto and other motor vehicle dealers posted a 3.1% increase in sales in April, and sales in that category more than doubled over last year as stay-in-place orders were lifted and mobility picked up. The Bureau of Labor Statistics' May consumer price index showed a 7.3% increase in prices for used cars and trucks, portending what could be another gain in retail sales in this category in May.