The deeply impoverished former English colony of Guyana has become one of the world’s hottest offshore drilling locations. Global energy supermajors have made a slew of major oil discoveries in Guyana’s and neighboring Suriname’s offshore waters, notably in the 6.6-million-acre Stabroek Block in which global energy supermajor Exxon has a 45% interest with 30% and 25% held by Hess and CNOOC respectively. By April 2021 Exxon had calculated that it had nine billion barrels of recoverable oil equivalent resources in the Stabroek Block. The integrated energy supermajor expects to be pumping more than 750,000 barrels daily from the block by 2026. Those numbers underscore the scale of the asset and its considerable potential.

Exxon’s latest announcement demonstrates that Stabroek Block is delivering considerable returns for the global energy supermajor. Earlier this month the integrated energy company announced its second oil discovery for 2021 at the Longtail-3 well drilled in the Stabroek Block offshore Guyana. The well is roughly two miles from the Longtail-1 well drilled in 2018 and encountered 230 feet of net pay in what Exxon described as high-quality hydrocarbon-bearing reservoirs. 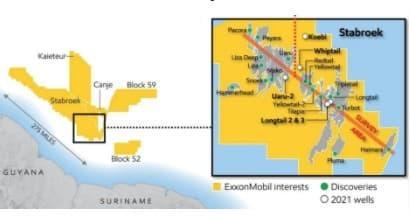 This discovery comes on the back of April 2021 at the Uaru-2 well, drilled nearly 7 miles south of the Uarua-1 well. According to Exxon, the well encountered 120 feet of high-quality oil-bearing reservoirs. That discovery saw the energy supermajor upgrade its recoverable resource estimate for the Stabroek Block from eight million to around nine million barrels of oil equivalent. Exxon is conducting a 15 well drilling campaign for 2021 in the Stabroek Block. The company recently completed the Koebi well which, disappointingly, showed no commercial volumes of hydrocarbons and it is in the process of drilling the Whiptail target to the northwest of the 2020 Redtail discovery.

Exxon has planned for 2021 a three exploration well drilling campaign in the Canje Block to the north of Stabroek. Exxon has a 35% interest in the Canje Block with 35% also held by French supermajor Total, 17.5% by JHI, and the remaining 12.5% controlled by Mid-Atlantic Oil and Gas. 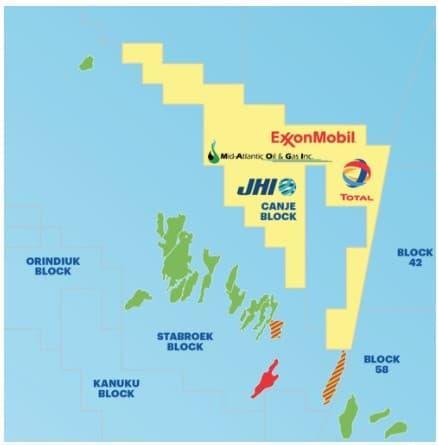 The March 2021 Canje Block Bulletwood-1 well discovered the presence of hydrocarbons in what Exxon described as quality reservoirs but was deemed to be non-commercial. The integrated oil supermajor is pressing on with its drilling program having restarted operations for the second exploration well Jabillo-1 with the Sapote-1 prospect to be drilled later this year.

Exxon’s impressive run of oil discoveries in offshore Guyana sees it operating in the region with a healthy drilling success rate of around 80%, which is a superior record to many of its peers and other offshore oil basins. These events explain why offshore Guyana was earmarked as a priority for the global oil supermajor, despite earlier dry wells including the November 2020 Tanger-1 well in the Kaieteur Block and the January 2021 Hassa-1 well in the Stabroek Block.

Related: The Real Reason Big Oil Is Giving Up On Iraq

The attractiveness of operating in offshore Guyana is enhanced by the low breakeven costs associated with the jurisdiction. In a May 2021 Hess.com/static-files/cd1529dc-ddd7-41b4-8c08-07f973fe8ceb">presentation, Exxon’s partner in the Stabroek Block Hess listed breakeven prices of $35, $32, and $25 per barrel Brent for the Liza phase 1, Payara, and Liza phase 2 developments respectively in the block. Those breakeven prices indicate the operations are highly profitable with Brent trading at around $74 per barrel and extremely resilient to another oil price collapse, which according to analysts is unlikely. This appeal is enhanced by the light sweet crude oil produced by the Liza Phase 1 operation, which achieved a nameplate productive capacity of 130,000 barrels per day during March 2021. The assay or Liza crude oil, which has an API gravity of 32 degrees and 0.58% sulfur content, indicates it is a light sweet grade. Those lighter sweeter crude oils are growing in popularity with refiners because they are cheaper and easier to distill into higher quality low emission fuels. This has become particularly relevant since the introduction of IMO 2020 at the start of January last year, which reduced the content of maritime bunker fuel to 0.5%, a seventh of what it had been previously. Those characteristics mean lighter sweeter crude oil grades sell for higher prices than heavier sour varieties. As a result, those oil varieties not only sell at a lower discount to Brent but in some cases, depending upon demand from refiners, can trade at a premium to the international oil price benchmark. This further bolsters the profitability of Exxon’s operations in the Stabroek Block explaining why the company has prioritized exploiting the asset.

Offshore Guyana has emerged as one of the hottest offshore drilling locations globally. Exxon continues to report a steady stream of discoveries. If the energy supermajor’s 2021 Guyana drilling program continues to be successful, it is easy to see its recoverable oil resources in offshore Guyana exceeding 10 billion barrels by the end of this year. This will deliver a tremendous windfall for deeply impoverished Guyana, despite the controversy surrounding the favorable exploitation agreement Exxon was able to secure with the national government in Georgetown. The International Monetary Fund announced that Guyana’s economy expanded by an incredible 43% during 2020, despite the pandemic, and expects gross domestic product to grow another 16% this year because of the massive oil boom that is underway.

By Matthew Smith for Oilprice.com