Everyone Will Be Calling Lucid Motors the ‘Tesla-Killer’ by July 4, 2022

July 2021 will be a big month for Lucid Motors (NYSE:CCIV) and CCIV stock. For one, it will be listed on the Nasdaq under LCID later this month. But July of next year will be even bigger. Over the next year, Tesla (NASDAQ:TSLA) will continue to occupy itself democratizing EVs for all, while Lucid Motors will take the luxury EV market by storm. 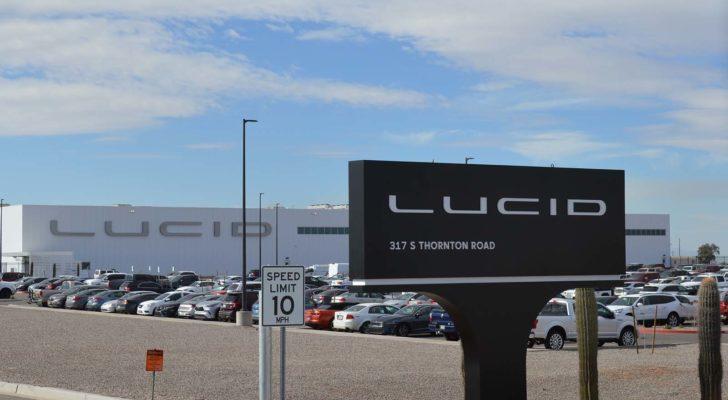 Source: Around the World Photos / Shutterstock.com

Lucid Motors has the talent, tech, branding and resources to beat Tesla at its own game. They’ve been on a tear recently and are firing on all cylinders.

So, it’s only a matter of time before the inevitable occurs. Expect great things from CCIV stock — soon LCID — in the coming year and beyond.

What Lucid Motors Has Been Up To

Lucid Motors will be the luxury EV maker soon enough. With Tesla’s premium Plaid+ model cancelled, this will be an even easier feat. And Lucid’s Air Dream model blows any remaining would-be competition out of the water with its 500-plua mile range.

Lucid Motors also plans to innovate in the SUV space in 2023 with its luxury SUV, launching on its modular platform LEAP (Lucid Electronic Advanced Platform). Lucid’s CEO has also stated that the range of EV models offered won’t stop there.

In other news, Lucid Motors opened another Lucid Studio recently. Lucid Studios give visitors the ability to “experience Lucid Air and learn more about the full lineup” in person.

Tesla has a bunch of these stores, so it’s about time we start seeing Lucid’s physical presence make as grand a statement.

This newest location is in New York and brings its current number of studios in North America up to eight. They plan on having 20 total studio locations by the end of 2021.

When it comes to the market matters, Lucid’s S-4 Registration Statement has been declared effective by the Securities and Exchange Commission. The stockholder meeting is scheduled for the 22nd of July, and closing is anticipated the day after. Very soon, we’ll see Lucid Motors trading under LCID on Nasdaq. In terms of movement, CCIV stock rose 30% in June and is up over 180% year-to-date. It sank a bit today, but so did all EV stocks.

Lucid Motors EV reservations have been incredibly popular, reaching 10,000 reservations recently. Some individuals even deposited $7,000 or more, which is crazy given that the minimum deposit to reserve an EV was $100.

And when it comes to production of all these EVs, Lucid Motors plans to expand its Arizona production plant by 2.7 million square feet in order to ramp up its ability to produce cars.

For so long, Tesla has dominated the luxury EV space, and EV space in general, because it had no competition. Lucid’s CEO has stated that Tesla’s dominance has depended on this lack of competition to-date — “And right now, there is one runner in that tech race and it’s Tesla. That’s why Tesla commands that market cap. That’s why it’s in that preeminent position.”

He isn’t wrong. We believe Lucid Motors will continue to push the technological envelope and eat away at Tesla’s luxury market dominance until “luxury EV” becomes synonymous with “Lucid Motors.”

They can accomplish this thanks to its incredibly gifted team, which has experience spanning a variety of automotive companies including Tesla, Jaguar (NYSE:TATA), General Motors (NYSE:GM), Volkswagon (OTC:VWAGY), Ferrari (NYSE:NYSE) and a host of others. Lucid Motors also has team members that previously worked on such revolutionary technology as the Tesla Model S and the iPhone. There’s clearly no shortage of talent here by a long shot.

And as more automakers besides Lucid and Tesla gear up to compete, Lucid’s CEO has openly welcomed the competition. He’s glad other carmakers will be entering the space, so that Lucid Motors can be compared to them, which speaks to his confidence in the company’s ability to outperform all competitors.

By July of 2022, forgoing any extenuating circumstances, Lucid Motors will have successfully claimed the luxury EV crown from Tesla. And they won’t stop there.

Count on Lucid Motors to continue dominating over the next five years and beyond.

If you want to hear about more stocks that could score you big returns over the coming quarter, subscribe to my free e-letter, Hypergrowth Investing.

In Hypergrowth Investing, I cover emerging megatrends and high-risk, high-reward stock picks each and every day. By becoming a subscriber, you’ll never have to pay a dime and will always get high-quality information on a number of market themes and picks that could make you a ton of money over the near- to long-term.

Interested? Just click here and you’re well on your way to getting your first issue directly in your inbox. Just look for it each day at 7:30 a.m. Eastern.

On the date of publication, Luke Lango did not have (either directly or indirectly) any positions in the securities mentioned in this article.

The post Everyone Will Be Calling Lucid Motors the ‘Tesla-Killer’ by July 4, 2022 appeared first on InvestorPlace.