The Euro is trading lower on Tuesday after giving up earlier gains. This is a sign that traders have turned cautious ahead of the Federal Reserve’s two-day policy meeting, which could potentially provide hints of plans to start tapering its bond purchases.

Ahead of the meeting, Fed policymakers have stressed that rising inflationary pressures are transitory and ultra-easy monetary settings will stay in place for some time to come. However, recent economic data has raised concerns that price pressure could force an earlier stimulus withdrawal.

These are the reasons Euro traders are being so cautious. They simply cannot be certain which scenario will sway the Federal Open Market Committee’s (FOMC) next monetary policy decisions.

In other news, traders showed little reaction to data that showed the Euro Zone’s unadjusted trade surplus was almost five times higher in April than a year earlier, but still smaller than expected.

On the trade front, the head of the European Commission announced that the bloc and the U.S. had resolved a 17-year dispute over aircraft subsidies. 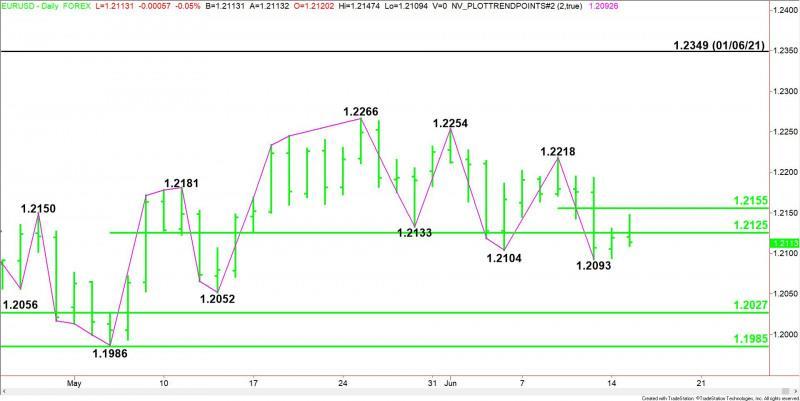 The direction of the EUR/USD on Tuesday is likely to be determined by trader reaction to the pivot at 1.2125.

A sustained move under 1.2125 will indicate the presence of sellers. This could trigger a further break into 1.2093. This price is a potential trigger point for an acceleration into the nearest main bottom at 1.2052.

A sustained move over 1.2125 will signal the presence of buyers. This could trigger a quick move into the pivot at 1.2155. Look for sellers on the first test of this level. Taking it out, however, could trigger an acceleration to the upside with 1.2218 the next short-term target.