The Euro is edging lower against the U.S. Dollar on Thursday after giving up earlier gains in yesterday’s session. Wednesday’s quick intraday reversal to the downside came as two Federal Reserve officials said that a period of high inflation in the United States could last longer than anticipated, a day after Fed Chair Jerome Powell played down rising price pressures.

In other news, data on Wednesday showed that Euro Zone business growth accelerated at its fastest pace in 15 years in June as the easing of lockdown measures unleashed pent-up demand and drove a boom in the dominant services sector but also led to soaring price pressures, a survey found.

The IHS Markit’s Flash Composite Purchasing Managers’ Index, seen as a good guide to economic health, jumped to 59.2 from 57.1, its highest reading since June 2006. It was ahead of the 50 mark separating growth from contraction and a Reuters poll estimate for 58.8. 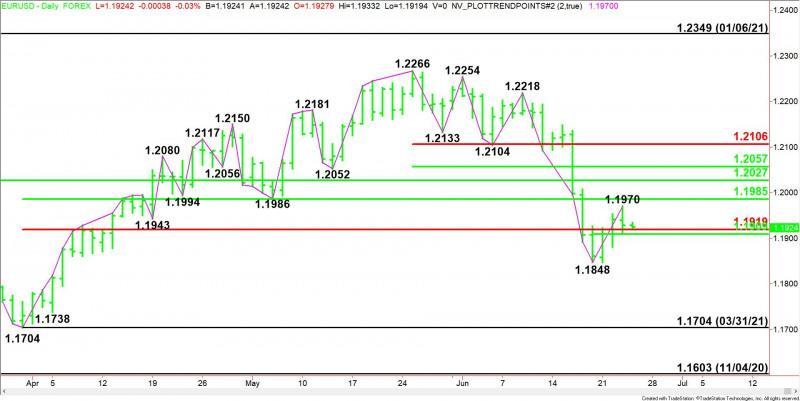 The main trend is down according to the daily swing chart. A trade through 1.1848 will signal a resumption of the downtrend. A move through 1.2218 will change the main trend to up.

The direction of the EUR/USD on Thursday is likely to be determined by trader reaction to 1.1919 to 1.1909.

A sustained move under 1.1909 will indicate the presence of sellers. If this move creates enough downside momentum then look for the selling to possibly extend into the main bottom at 1.1848.

The series of retracement levels indicates that any short-covering rally is likely to be a labored event until buyers can take out 1.1206 so watch for a choppy trade over the short-run.