Ethereum: The Run to $9000 Was Delayed. Get Ready for the Next Try

Three weeks ago, see here, I showed a potential Bullish Elliott Wave Principle (EWP) path for Ethereum (ETH), “if ETH can rally above the $2920 high made last week, without dropping below Sunday’s low first ($2275) and especially not below $1736“.

Well, that rally over $2920 did not happen as the cryptocurrency stalled at $2890 on June 3 and subsequently dropped below $1736 two days ago. Thus the Bullish potential setup was negated. Does this mean the run to $9000 will not happen anymore? No, my work strongly suggests a bottom is much closer now. Let me explain.

Figure 1A below shows the monthly candlestick chart for ETH; as you can see, it has lost over 60% since last month’s all-time high (ATH). In addition, it did a 62% retrace of the rally that started in March last year. If we go back to 2017, we see ETH also lost over 60% of its value during the summer, which was also a 62% retrace. It then staged an almost 1000% rally. Thus, historically the current decline is still nothing out of the ordinary.

Zooming in, the weekly candlestick chart in Figure 1B shows ETH has so far only moved down in three EWP-waves from its ATH into this week’s low: red waves a, b, c. Corrections always move in at least three EWP waves.

Thus, based on the historical evidence and the EWP count, the current decline must still be viewed as a correction in a significant long-term uptrend until proven otherwise. 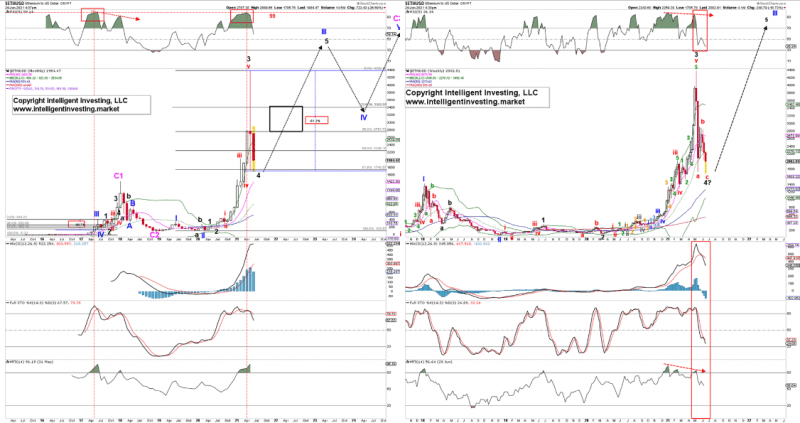 Short-term, there is still downside risk, but also even more upside potential longer-term

The devil is always in the details, so allow me to zoom into the daily time frame. See Figure 2 below. It follows ETH should be in red wave-c of black wave-4. C-waves are mostly comprised of five smaller waves. In this case, green 1, 2, 3, 4, and 5. Green wave-3 reached the ideal target zone, and ETH bounced back to the ideal green wave-4 target zone. If all goes to plan, the cryptocurrency should soon do a final green wave-5 lower to the ideal target zone of $1349-1503. That sequence should set up a nice positive divergence on the technical indicators (RSI, MACD, FSTO, MFI) to allow the red-dotted anticipated path to unfold. But, if ETH can rally back above $2250 from current levels, then the odds have increased significantly that wave-5 to $9000 has already started. The next level to watch is then $2650, and ultimately $2920 needs to break. 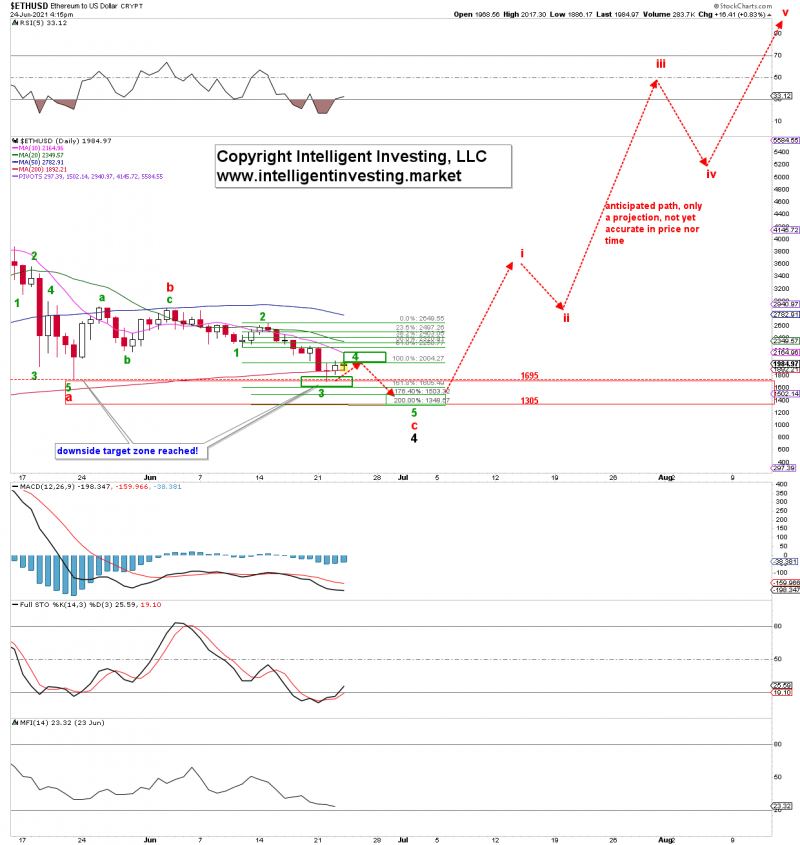 Bottom line: ETH failed to break above $2920 and instead moved below $1736 since my last update. Thus the cryptocurrency’s run to $9000+ was postponed. Now I am watching for a last more minor wave lower to ideally $1500-1300 before the rally to $9000 should commence. But a break above $2250 will start to give the Bulls an edge. The monthly and weekly charts support the notions the current 60% decline is still “merely” a correction within a larger long-term Bull market.