Since leaving the top post at the Bank of England last year, former Governor Mark Carney has arguably been the most vocal advocate, urging financial institutions to align themselves with emissions goals of the Paris Climate Agreement.

But as shareholders increasingly step up pressure, and lawmakers call for stricter regulations around climate disclosures, Carney said fossil fuel divestments shouldn’t be the sole focus of tackling the global crisis. Speaking to Yahoo Finance Live, the United Nations Special Envoy for Climate Action and Finance, said investing in the green energy transition is as important as moving capital away from the biggest sources of greenhouse gases.

“We're shifting from risk to opportunity and, as I say, aligning value in the market with what we want in society,” said Carney, who is also the vice chair at Brookfield Asset Management.

Carney has pushed to do that, in part, by establishing the Glasgow Financial Alliance for Net Zero (GFANZ) last month, a UN-backed coalition representing 160 banks, asset managers, investors, and insurers. The combined group, responsible for more than $70 trillion in assets, represents the broadest financial industry effort to date, to decarbonize lending portfolios and other practices. The initiative, in particular, calls for financial institutions, including Morgan Stanley (MS) and Citigroup (C), to accelerate their transition to a net zero economy, while establishing science-based policies to reach that goal by 2050.

Banks will now be required to dramatically reduce lending to fossil fuel-related projects, but Carney stopped short of calling for an outright divestment from oil and gas.

“It's as much about investing in companies that are part of the solution, then, then it is about divesting. Obviously if a company doesn't have a plan, if it isn't moving to get its emissions down, it's very risky and they're going to be starved of capital. That's the reality of this transition,” Carney said. “But this is very positive and a very large opportunity. I think that's where most institutions are focused. Where's the world going, not what it's leaving behind.” 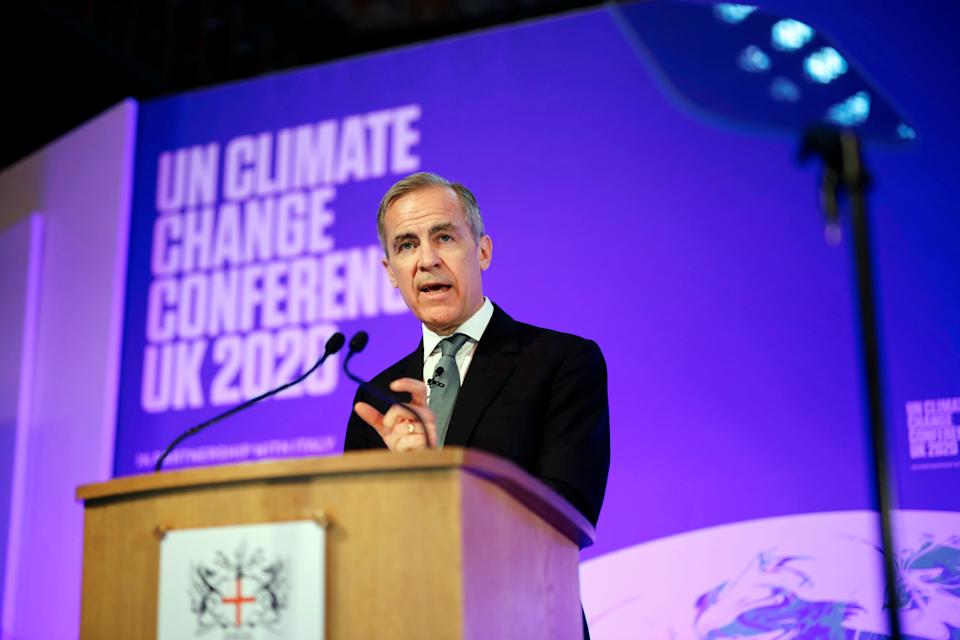 Mark Carney, Governor of the Bank of England, makes a keynote address to launch the private finance agenda for the 2020 United Nations Climate Change Conference (COP26) at Guildhall in London, Britain February 27, 2020. Tolga Akmen/Pool via REUTERS

Still, banks have been under pressure to accelerate their low-carbon transmission because shareholders have tied the company’s economic performance and future financial risks to climate risks. Last year more than 600 investors requested detailed disclosures from 12,000 companies, documenting everything from energy procurement and carbon emissions, to water security and soft commodity drive deforestation, according to CDP.

Regulators, government leaders, and central banks have all joined those calls. Last week, U.S. President Joe Biden signed an executive order instructing U.S. Treasury Secretary Janet Yellen to work with members of the Financial Stability Oversight Council to develop standards for required disclosures of climate-related financial risks. The Federal Reserve established a Supervision Climate Committee (SCC) to develop a framework for assessing firm risks. while the Bank of England updated its mandate, to prioritize green bonds and phase out the largest polluting firms from its part of its corporate bond portfolio.

But, states in the U.S. that largely rely on coal and natural gas, have pushed back against tighter climate-related restrictions on banks, highlighting the challenges of reigning in bank lending activity. In a letter addressed to U.S. Climate Envoy John Kerry, treasurers from 15 states threatened to withdraw assets from banks that reduce loans to fossil fuel companies, saying the Biden administration’s efforts would threaten jobs in their states.

Carney said GFANZ is focused on helping institutions develop a plan to transition away from fossil fuels and reducing portfolio emissions through carbon offsets, ahead of the COP 26 meeting in Glasgow this fall.

“What [financial institutions are] looking to do is work with companies to invest so that those companies can get their emissions down. That can mean renewable power [because] there's a huge boom and a huge requirement in renewable power,” he said. “In the end, if the financial sector is not driving— or helping to enable these emissions reductions, they just won't happen.’