The fate of Apple’s (AAPL) lucrative App Store was placed in the hands of a California federal judge Monday, following closing arguments from lawyers for the tech giant and its opponent, “Fortnite” developer Epic Games, in their widely watched antitrust trial.

At issue in the court battle, which ran about three weeks, is Epic’s claim that Apple operates the App Store as an illegal monopoly by forcing developers to distribute its app exclusively through the App Store and exclusively use Apple’s payment processing services requiring them to pay the iPhone maker a 30% commission on app sales.

Epic is asking Judge Yvonne Gonzalez Rogers to issue an injunction requiring Apple to change its business model, so app developers can get their apps onto iPhones using third-party app stores, effectively cutting out Apple’s 30% fee. But Apple says such a change would jeopardize mobile device security, with CEO Tim Cook testifying last week that such a move was “an experiment I wouldn’t want to run.”

Apple doesn’t break out revenue for the App Store, instead bundling the marketplace with its Services business alongside Apple Music+, Apple TV+, iCloud, and other sources. Still, the segment totaled $53.7 billion in 2020, or roughly 20% of Apple’s $274 billion in total revenue for the year, with in-app purchases on gaming apps representing the App Store’s dominant revenue source. 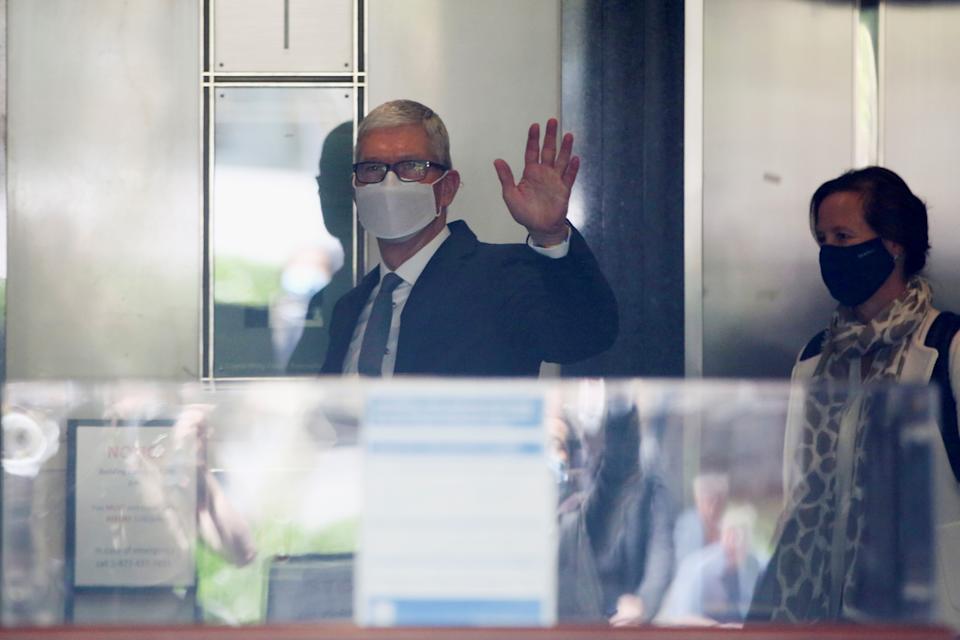 Apple CEO Tim Cook waves from the elevator as he leaves after speaking during a weeks-long antitrust trial at federal court in Oakland, California, U.S. May 21, 2021. REUTERS/Brittany Hosea-Small

Gonzalez Rogers said with 4,500 pages of testimony to review she hopes to issue her written decision in the coming weeks or months, when she could grant all, part, or none of Epic’s requests in the case.

'The courts are very careful in antitrust cases'

The dispute began when “Fortnite,” with about 350 million registered players, was booted from Apple’s and Google’s (GOOG, GOOGL) app stores in August, and banned from their operating systems, after Epic circumvented the platforms by offering direct, in-game purchases at a 20% discount.

Apple and Google both said the move violated their terms of service, justifying removal from the stores. Epic filed separate lawsuits against Google and Apple, claiming the removals violate federal and California antitrust laws. Apple also countersued Epic in the antitrust lawsuit for breach of contract.

In issuing her opinion, Gonzalez Rogers may not hand an absolute victory to either Apple or Epic, Syracuse University College of Law professor Shubha Ghosh told Yahoo Finance.

“The courts are very careful in antitrust cases,” Ghosh said. “I don't think they want to destroy a company by any means. I think the judge…is careful to see the arguments on both sides and what the effects would be for its decision, whether it rules in favor of the defendant, or whether it rules in favor of the plaintiff. So I would imagine the judge would take a fairly narrow ruling.”

While Apple’s App Store takes a 30% cut of sales from larger developers, after Epic filed suit it began reducing commissions for companies that make less than $1 million in revenue per year to 15%. Subscription services also have separate requirements, with developers paying 30% for the first year of a subscription, and 15% for each subsequent year. Free apps remain free, with Apple taking no commission from developers for downloads. 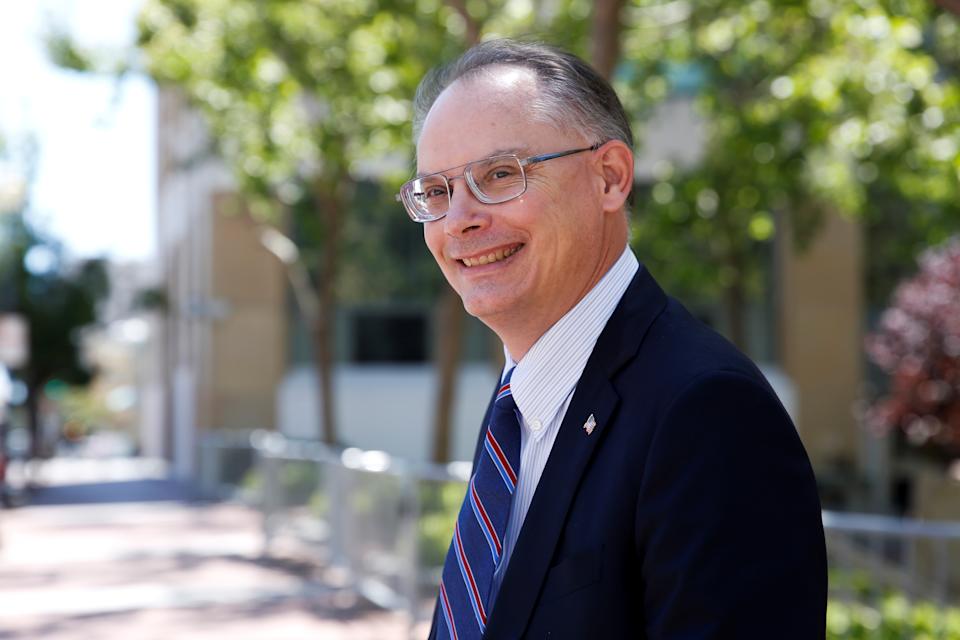 The bulk of Gonzalez Roger’s questioning Monday focused on how she should define the market relevant to the case, a critical step that will impact its outcome, including any remedies the court may impose on Apple if it’s found to be violating antitrust law.

Lawyers for Epic argued that the market central to Apple’s alleged anticompetitive conduct should be defined narrowly as app distribution, or in other words, how apps get onto the iPhone.

Apple’s lawyer disagreed, saying no separate market for app distribution exists because it has never separately licensed iOS or its App Store. Instead, they said, the relevant market is the broader mobile device market, where it faces fierce competition from dozens of manufacturers of Android-based mobile phones and tablets, and gaming consoles like Microsoft’s Xbox and Nintendo’s Switch.

“Apple's business model was developed long before it had anything that anyone claimed was market power,” Apple’s lawyer argued, saying that model more effectively protects users from malware and other security and privacy breaches than Android-based devices.

The tech giant’s lawyers also positioned Apple’s less malware-ridden ecosystem as a market alternative to Android’s mobile operating system — an option that it said would be squashed, and lessen competition for mobile devices, if it opened its software to outside players.

“The iOS environment would be turned into the equivalent or perhaps even a poor annotation of Android. And that eliminates consumer choice,” Apple’s lawyer told Gonzalez Rogers of one possible outcome discussed during the trial.

'The benevolent overlord of this ecosystem'

Epic countered the argument by pointing out that Apple has accommodated requests from the Chinese government to remove App Store content. (Epic has its own connections to China: Chinese internet megacorporation Tencent holds a 40% stake in the developer.)

Epic’s arguments during the trial also focused on Apple’s so-called ecosystem. The developer argued that by limiting consumers’ ability to use apps bought through the App Store on Apple devices, the tech giant ensured that customers would continue to use Apple products like the iPhone, or risk losing the apps they’ve previously purchased.

“They’re the benevolent overlord of this ecosystem,” Epic’s lawyer, Gary A. Bornstein, said of Apple’s argument that its iOS is inseparable from its App Store. “Let us continue to do it without competition,” he said sarcastically, “because it’s worked out for us so far? That is not a defense under the antitrust laws.”

Gonzalez Rogers was, however, skeptical of how Epic’s claims in its similar antitrust case pending against Google and its Google Play store could coexist with Epic’s push for Apple to allow other app stores on the company’s devices. How, she asked, could Epic also maintain antitrust claims against Google’s Android when third-party stores are already available on the operating system? 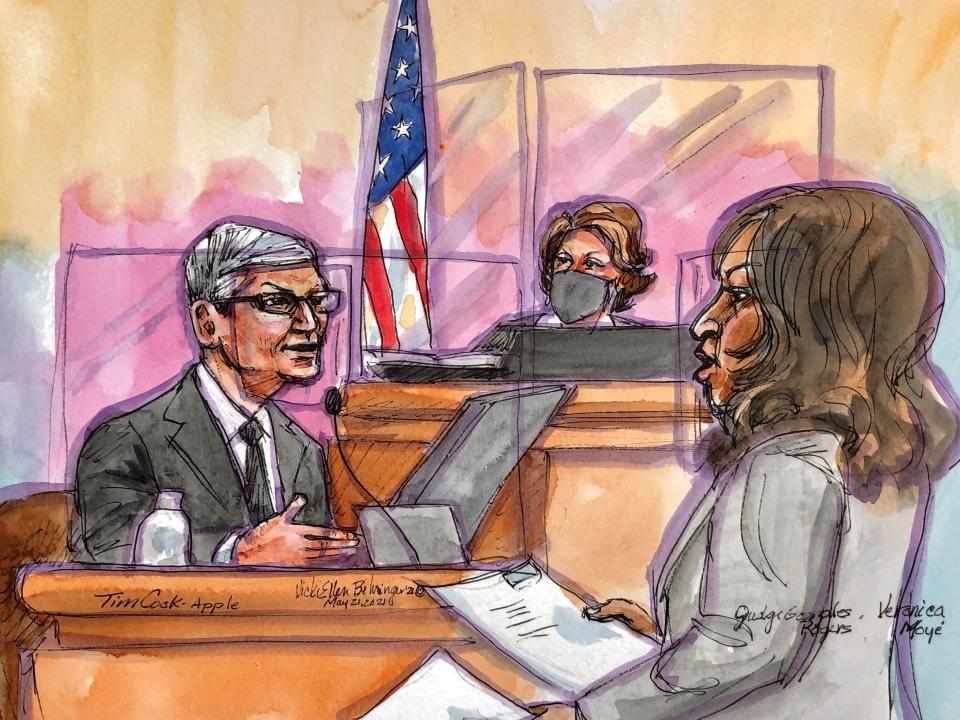 Apple CEO Tim Cook testifies on the stand during a weeks-long antitrust trial at federal court in Oakland, California, U.S. May 21, 2021. REUTERS/Vicki Behringer

The judge also had probing questions for Tim Cook, who made a rare court appearance on Friday. Asked about Apple’s treatment of in-app purchases, and why Apple refuses to allow app developers so much as a mention that customers can make purchases outside of the App Store, Cook said it would take away Apple’s payoff for the effort it makes in acquiring the customer.

“It would be akin to Apple down at Best Buy saying Best Buy put in a sign there, where you’re advertising that you can go across the street to the Apple store and get an iPhone,” Cook explained in an analogy offered early during his testimony.

While Wedbush analyst Dan Ives predicted that Apple would win its court battle with Epic, he pointed out that the tech giant has also faced antitrust scrutiny in both the European Union and the U.S. In October, House Democrats issued a damning report on Big Tech finding that the App Store allowed Apple to “generate supra-normal profits.”

“We continue to believe Apple comes out with a victory in this Game of Thrones battle, but clearly risks exist if the Judge goes against Apple,” Ives said. “We believe Apple winning the Epic case will remove a major overhang on the stock, although Big Tech remains in regulatory scrutiny for years to come.”