Ford Motor Company (F) unveiled its all-new F-150 Lightning pickup truck on May 19, confirming that the legacy automaker is on pace to make inroads into the electric vehicle industry.

According to data from Forbes, F-Series was the most popular vehicle model in the United States in 2020, and for this reason, analysts expect the new electric truck to perform well once it hits the market in early 2022. Ford F-Series, in fact, has been the best-selling truck in the U.S. from 1977 to 2020, and this statistic highlights the incredible success of this vehicle model. (See Ford stock analysis on TipRanks)

Legacy automakers have already come under pressure as a result of regulatory support for electric vehicles. It would be reasonable to assume that a major turnaround strategy is required to turn the tides of fortune for these automakers. Ford seems to be executing its strategy successfully, making the company significantly undervalued in the market today.

Ford CEO Jim Farley tweeted on May 21 that the company received more than 44,500 reservations for the F-150 Lightning truck in just the 48 hours after it announced pre-bookings. This suggests that the public has taken the idea of an electric truck in stride, although some analysts were skeptical about the success of such a vehicle.

There is a long way to go, but this initial response from consumers is likely to give the necessary confidence for Ford executives to ramp up investments in EV manufacturing plants.

The Outlook is Promising

Ford’s annual Capital Market Day event was on May 26, and the company discussed its electrification strategy in detail at this event. This was the first investor event since Jim Farley was appointed CEO of the company in October last year, which makes this event even more important, as the CEO announced many new strategic decisions to steer the company in the right direction.

The highlight of this event was the discussion of the company’s strategy toward gaining market share in the electric vehicle industry. For example, it will be partnering with Korean company SK innovation, which will build all of Ford's facilities for battery production. Furthermore, Ford will begin to connect software and maintenance packages to all its commercial vehicles.

The decision to ramp up investments in electric vehicles came as part of the company’s strategy to transform Ford into an automaker that supports environmentally friendly policies.

In Europe, where emission reduction targets are stricter than in the U.S., Ford is making aggressive moves to achieve carbon neutrality. By 2024, all commercial vehicles sold in Europe will be zero-emissions capable, whereas passenger vehicles will achieve this feat by 2030. Although European automakers are already ahead of many American companies when it comes to complying with zero-emission targets, Ford’s billion-dollar investments will help the company retain its market share in Europe for an extended period of time.

Many Wall Street analysts reacted positively to the F-150 Lightning truck. However, uncertainty surrounding Ford's ability to successfully execute its turnaround strategy has forced analysts to remain cautious about the outlook for the automaker.

The stock's average analyst rating consensus is a Moderate Buy, with 10 Buy, 5 Hold and 1 Sell ratings. The average analyst price target for Ford is $14.59, which implies upside of .4% from the current market price. 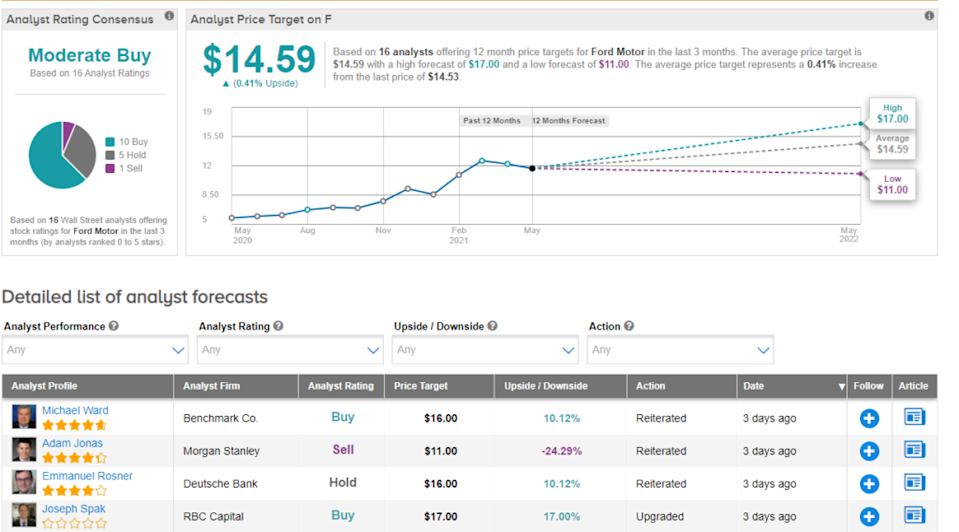 Although the market is trading at historically high valuation multiples, Ford is valued at a forward P/E of just 14, primarily as a result of the negative investor sentiment toward legacy automakers.

If the company successfully penetrates the electric vehicle industry, a substantial expansion of valuation multiples is on the cards. Many EV companies, including Tesla, Inc. (TSLA) are already trading at sky-high valuation levels, and Ford will also benefit from high earnings multiples in the future if the company continues to make inroads into the opportunities available in the electric vehicle market.

Ford’s financial performance in the last 5 years has been lackluster. Its market value tumbled as the likes of Tesla continued to hit fresh highs, due to the favorable regulatory and macroeconomic outlook for the electric vehicle industry.

Ford finally seems to be on track to penetrate this lucrative industry. Successful execution of its electrification strategy is likely to push the stock into new highs in the coming years.