Earnings season kicks off, CPI and retail sales: What to know this week

Investors are gearing up for a busy week, with the start of second-quarter earnings season and an onslaught of new economic data on deck.

The prospects of another strong quarter for corporate earnings results have been one of the major factors underpinning stocks' march to new highs as of late. S&P 500 earnings in aggregate are expected to grow by 64% for the second quarter, which would mark the fastest increase since the fourth quarter of 2009, according to FactSet data.

"Corporate earnings results have far exceeded expectations so far this year with S&P 500 companies posting record levels of EPS growth, surprises, and beat rates during the first quarter, and 2021 and 2022. annual estimates being revised higher by analysts at a blistering pace as the economic recovery continues to gain steam," BMO Capital Markets strategist Brian Belski wrote in a note last week.

"As we enter the second half of the year, we believe companies will continue to build on the earnings recovery displayed in recent quarters, as more areas of the economy adapt and get closer to normal levels of activity throughout the year," he added.

As usual, the big banks will be the first major group to report quarterly results. Expectations are exceptionally high for the financial sector, which has come in at the third-best performing S&P 500 sector so far for the year-to-date, topped only by the energy and real estate sectors. And Wall Street has struck an increasingly more upbeat tone on earnings potential for this sector over the past several months, upwardly revising the consensus outlook for these companies' earnings. 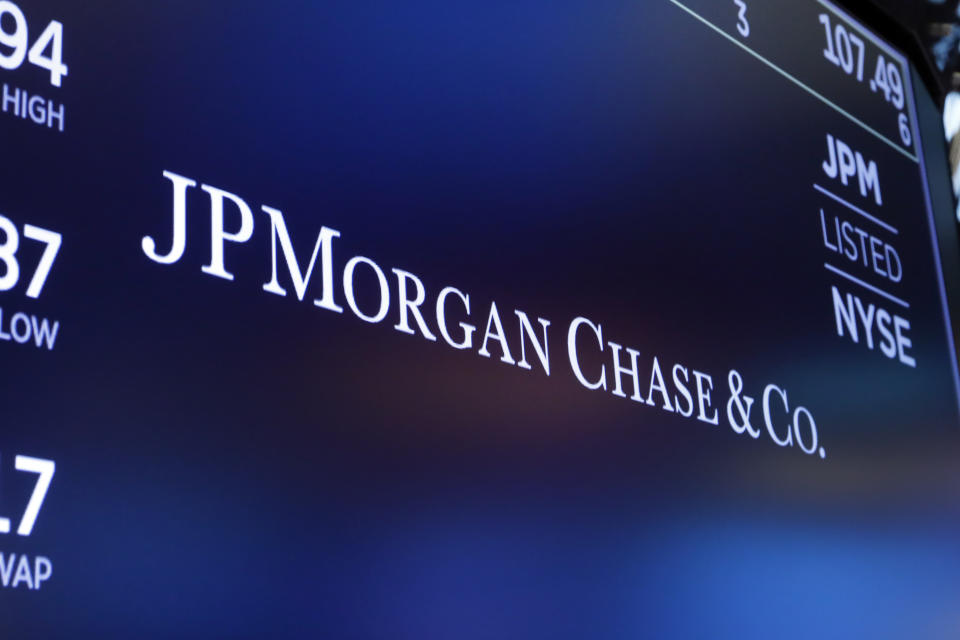 The logo for JPMorgan Chase & Co. appears above a trading post on the floor of the New York Stock Exchange in New York. (AP Photo/Richard Drew, File)

"The Financials sector has recorded the third-largest percentage increase in estimated (dollar-level) earnings of all 11 sectors since the start of the quarter at 11.5% (to $69.8 billion from $62.7 billion)," FactSet's John Butters said in a note. "As a result, the estimated earnings growth rate for this sector has risen to 119.5% from 96.9% during this time."

Banks are heading into second-quarter results following a strong start to the year. JPMorgan Chase (JPM), Goldman Sachs (GS) and Morgan Stanley (MS) each handily exceeded analyst estimates in the first quarter, when the start of the economic recovery and roaring market activity helped drive strong trading and investment banking results. With stocks rising to record highs and the IPO market posting its busiest month since 2000 in June, both trading and investment banking are set to be strong points yet again for the bulge-bracket banks.

For the April through June quarter, economic activity picked up even further, with this growth likely helping to further serve as a tailwind for banks' businesses. At the same time, however, interest rates have come down from a year-to-date high in March, which will likely pressure banks' all-important net interest income, or the profit derived from core lending practices. The benchmark U.S. Treasury yield rose to as high as 1.77% in late March before tumbling to around 1.35% as of Friday.

So far, banks have been split about the path for loan growth in the second half of the year given uncertainty around the pace of the economic recovery after an initial reopening surge.

According to Deutsche Bank analyst Matt O'Connor, there are still a number of positive drivers for loan growth left this year.

"Consumer stimulus peaked in March/April and should decline meaningfully during 3Q21," O'Connor wrote. in a note. "Several states didn't fully reopen until near the end of 2Q, including California and New York (a combined 15-20% of the U.S. population and even greater amount of the overall U.S. economy). As activity increases, spending and borrowing should as well."

In addition to the start of earnings season, a couple of closely watched economic data points are due for release this week.

The Consumer Price Index (CPI) from the Bureau of Labor Statistics will show the extent of price increases for consumers in June as supply chain bottlenecks and labor scarcities weigh on the economic recovery and push inflationary pressure higher.

The CPI is expected to rise 0.5% over last month following a 0.6% increase in May. Over last year, CPI likely grew by 4.9%, nearly matching May's 13-year high of 5.0%. But excluding more volatile food and energy prices, CPI likely rose by 4.0% last year, or by the most in nearly three decades.

"We expect another big rise in core consumer prices in June, but there are signs that the severe upward pressure seen in recent months is easing," Paul Ashworth, chief North America economist for Capital Economics, wrote in a note. "The latest data suggest that wholesale used vehicle prices have peaked."

"Prices in the service sectors hardest hit by the pandemic still appear to be rising rapidly, however, with rising air passenger numbers pointing to another jump of 8% or so in CPI airfares, and the hotel occupancy data consistent with CPI lodging away from home rising by about 4%," he added. "The May report illustrated that price pressures are also emerging in other sectors, with rent of shelter inflation trending higher again and labor shortages in the leisure sector resulting in a 0.6% m/m jump in food away from home prices. Both trends look to have further to run."

With prices moving higher, consumer spending likely also moderated further in June after a stimulus-fueled surge at the start of the year. Consensus economists expect the Commerce Department to report Friday that retail sales dipped by 0.5% in June compared to May, adding to the prior month's 1.3% monthly drop. 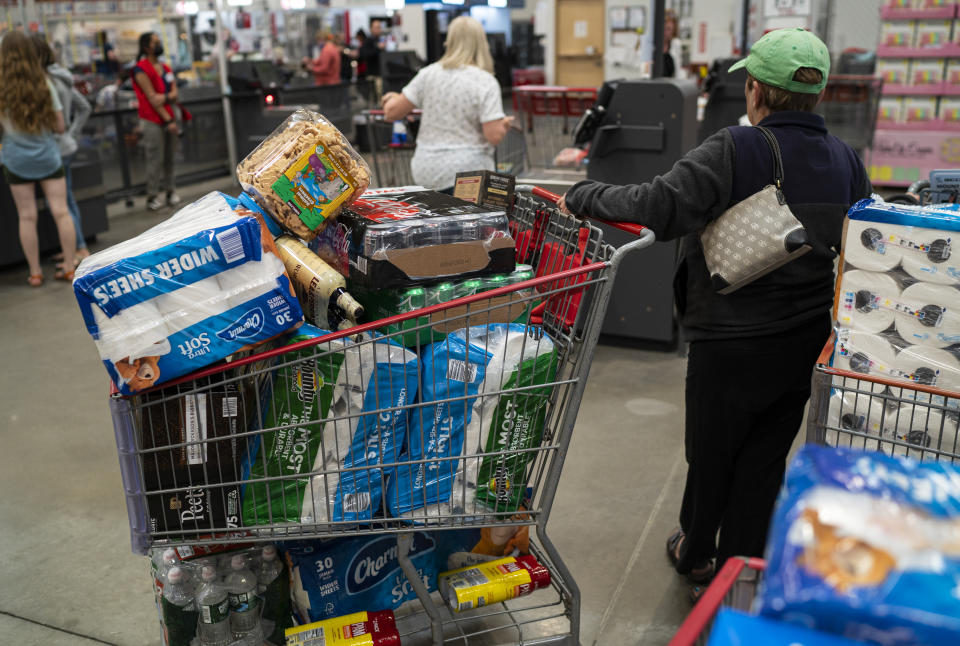 COLCHESTER, VERMONT – MAY 25: A shopper with a full cart waits to check out at a Costco Wholesale store May 25, 2021 in Colchester, Vermont. Costco reported a surge in its 2021 first quarter revenue of $45.38 billion as the U.S. economy began to rev up, an increase of 22% from the same period last year. (Photo by Robert Nickelsberg/Getty Images)

The expected drop in headline retail sales will likely be at least partially offset by rising gas prices and the ongoing rebound in restaurant spending. However, Friday's report may still downplay the full range of consumer spending taking place during the recovery given this year's shift back to spending on services as mobility increases.

"Based on our internal data, June marked the third month where durable goods spending was a drag to overall spending; while services provided a boost," Bank of America economist Michelle Meyer wrote in a. note. "Given that retail sales do not capture any services spending other than restaurant spending, we continue to think retail sales understates the degree of consumer spending recovery, which has largely been driven by services spending (such as traveling and entertainment) in recent months."