June E-mini S&P 500 Index futures are trading flat during the premarket session on Thursday, following a muted session on Wednesday. The low volatility, tight trading range activity is being labeled both a continuation of the holiday week and investor indecision ahead of a slew of economic data on Thursday and Friday’s U.S. Non-Farm Payrolls report. Some investors believe this week’s reports could set the tone at the Federal Reserve’s monetary policy meeting later this month.

The focus later today will be on the ADP Non-Farm Employment Change, Weekly Unemployment Claims and the ISM Services PMI report.

Investors are also eyeing Friday’s U.S. Non-Farm Payrolls report. Economists expect the data to show the creation of around 674,000 jobs in May, after April’s read came in below expectations at 266,000. 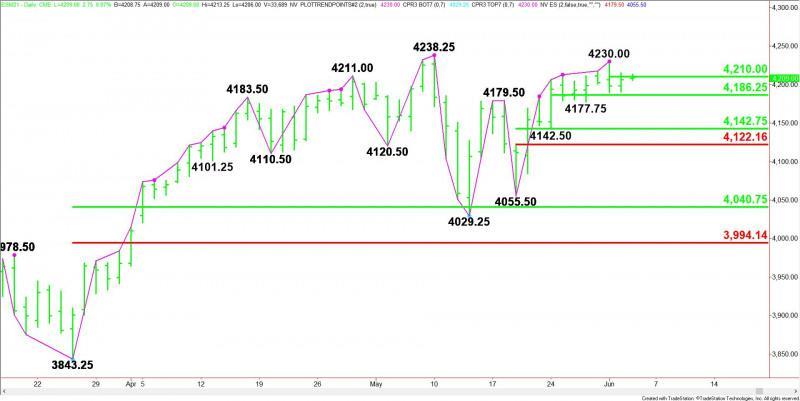 The main trend is up according to the daily swing chart, but momentum may be getting ready to shift to the downside with the formation of a closing price reversal top on Tuesday.

The minor trend is also up. A trade through 4177.75 will change the minor trend to down. This will confirm the shift in momentum to the downside.

The direction of the June E-mini S&P 500 Index on Thursday is likely to be determined by trader reaction to the pivot at 4210.00.

A sustained move over 4210.00 will indicate the presence of buyers. The first upside target is 4230.00. Taking out this level will reaffirm the uptrend with 4238.25 the next objective. This is a potential trigger point for an acceleration to the upside.