Drill Down Into the Price Movement of Cardano for Smarter Trades

Cardano (CCC:ADA-USD) has been called the “Ethereum killer.” But what’s that mean for tomorrow’s investors? Let’s look at the blockchain technology and its ADA coin, then offer a risk-adjusted determination aligned with those findings. 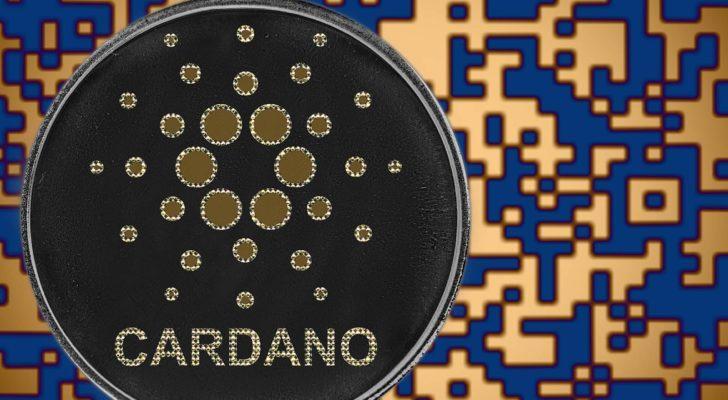 Ethereum (CCC:ETH-USD) is the second largest blockchain by valuation behind Bitcoin (CCC:BTC-USD) with a capitalization of nearly $250 billion. That puts roughly 95% of the S&P 500’s large-cap stock constituents to shame. And while it might be in second place by some measures, it’s the crypto market’s top dog in other meaningful ways.

Ethereum’s utility proposition for today’s digital decentralized finance (DeFi) market is without equal. Don’t take my word for it though. Street smart billionaire businessman Mark Cuban has credited ETH with cryptocurrency’s strongest functionality and smart contract technology, which will ultimately overshadow Bitcoin’s use.

The support is nice to have. But in a disruptive but also ever-evolving crypto market, what works today is no guarantee of future leadership, let alone survivorship. Enter Cardano and its ADA cryptocurrency.

The History and Technology of Cardano

Created in 2017 by one of Ethereum’s co-founders, ADA obviously deserves some built-in consideration. Today, there’s more than 10,000 digital assets out there. And besides ETH, Bitcoin and the joke token called Dogecoin (CCC:DOGE-USD), most investors would be hard-pressed to name even one other cryptocurrency.

Given Cardano’s important lineage to the crypto market’s second largest technology, ADA should raise eyebrows the way a new company created by Microsoft’s (NASDAQ:MSFT) Bill Gates might. And in fact, Cardano is proving its worth. The platform’s open source proof-of-stake blockchain has been gaining critical mass for incredibly good reasons.

Cardano’s technology is faster and less energy intensive than its competition. And whether that technology is used to guard against counterfeit retail goods or allow agriculture companies to track produce from the seed to your stomach, the functionality is important.

The news gets better for ADA investors too. Cardano is in the process of testing an upgrade called Alonzo.

Cute name aside, the build will enable smart contract blockchain. Along with Cardano’s existing scalability and cost advantages over Ethereum, this also allows for many Dapps (decentralized applications) to switch over to Cardano.

To be fair, Cardano isn’t the only potential Ethereum killer on the block. Polygon (CCC:MATIC-USD) is another top contender for that title. And Ethereum isn’t simply resting on its laurels either. A more robust version of the blockchain known as Ethereum 2.0 is in development to resolve the network’s own shortcomings. 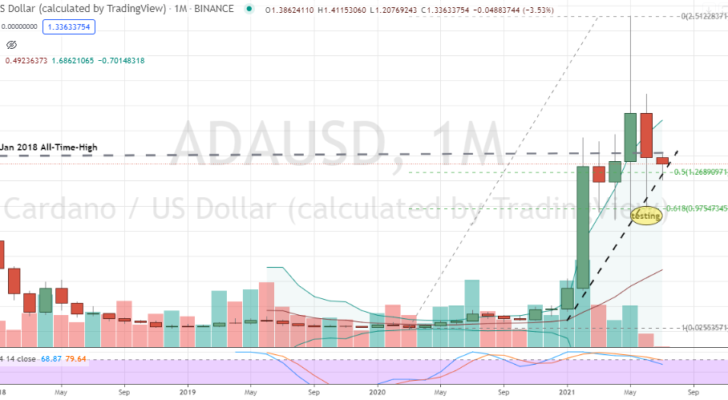 It’s important to remember that this is a period of early technological innovation. Few of us have even used a digital asset for anything other than a trading vehicle — spend some money on some tokens, wait for the price to rise, and then sell for a profit. Therefore, we also need to take a serious look at the ADA price chart.

As with any crypto investment, ADA is meant to be smartly traded for short-term gains. The hope is that a smaller stake after taking partial profits might turn into the life-changing investment variety. Today, a purchase to begin that kind of campaign might be possible.

Following May’s volatile correction off the token’s all-time-high, ADA formed an inside monthly candlestick. With June’s price action also taking the shape of a bullish hammer formed off trend and 62% Fibonacci retracement levels and centered on the contract’s prior 2018 high, anticipating a meaningful bottom has decent-looking support working in its favor.

I wouldn’t be a buyer of ADA just yet though.

Today, and as the monthly view also reveals, stochastics have turned bearishly over due to an overbought condition. What I’d demand from a purchase is for ADA to continue holding above the 50% level and trend support. The secondary indicator should, at a minimum, be doing something other than pointing down in neutral territory.

Ideally, a bullish crossover with the ADA token just crossing its former high would be the wish list entry. That’s so momentum is purchased, rather a falling knife. But life is hardly perfect and in this type situation, I’d settle for flat if ADA finds its way back above 2018’s prior high.

Bottom line, should those conditions more or less be met, I’d then advise managing that investment like it was the last $1.40 or so in your pocket, rather than just blindly cheering the trade and possibly being left holding the bag.

On the date of publication, Chris Tyler holds (either directly or indirectly) positions in Grayscale Bitcoin and Ethereum Trusts (GBTC, ETCG and ETHE). The opinions expressed in this article are those of the writer, subject to the InvestorPlace.com Publishing Guidelines.

The post Drill Down Into the Price Movement of Cardano for Smarter Trades appeared first on InvestorPlace.