Disney vs. Comcast: Which Media Stock Is A More Compelling Buy?

The U.S. media and entertainment industry is seeing growing consumption of content through OTT (over-the-top) players as more users are cutting the cord on pay-TV and switching to content streaming.

According to a Grand View Research report, the global movies and entertainment market is expected to be worth $114.93 billion by 2025.

In the fiscal second quarter, Disney posted revenues of $15.6 billion, down 13% year-on-year versus analysts’ expectations of $15.86 billion. Disney reported adjusted earnings of $0.79 per share, up 32% year-on-year, blowing past consensus estimates of $0.26 per share.

However, revenues for Disney’s theme parks business plunged 44% year-on-year to $3.2 billion, while this segment suffered a loss of $406 million in Q2 versus a profit of $756 million in the same quarter last year. This was because a majority of its theme parks around the world were closed or operating at a reduced capacity due to the pandemic, while sailings of cruise ships were suspended.

DIS stated that as operations at its theme park and cruise ships resume, and as film and production shoots including live sports events restart, the company expects to incur additional costs of $1 billion in FY21 to “address government regulations and implement safety measures for our employees, talent and guests."

Meanwhile, as Disney’s theme parks reopen, Rosenblatt Securities analyst Mark Zgutowicz remained optimistic about the stock and said that “we are most bullish near-term on the recovery of Parks relative to DTC." Zgutowicz has a Buy rating with a price target of $220 on the stock with a 24.7% upside.

The analyst added, “We see Parks 2H revenue reaching ~65% of FY'19 levels, with near breakeven segment OI [Operating Income] in 3Q, with weight of some fixed reopening costs at Disneyland CA and France.”

The company stated on its earnings call that its Disney Resort in Shanghai is operating at or above its levels in FY19.

Disney is following a flexible content distribution strategy with a multi-pronged approach that includes theatrical releases and a simultaneous access through its DTC platform, Disney+ Premier Access, content distributed directly on Disney+ and movies released in theatres exclusively.

Zgutowicz commented on this strategy, “Net-net, we do not expect theatrical content to be a meaningful driver of Disney+ subscriber additions near-term, and instead our focus is on episodic content…”

In Q2, Disney’s DTC service Disney+ had paid subscribers of 103.6 million and expects to have 230 million to 260 million subscribers by the end of FY24. Zgutowicz expects a “stable” subscriber growth over the next twelve months (NTM) for Disney+. (See The Walt Disney Company stock analysis on TipRanks)

Consensus among analysts on Wall Street is a Strong Buy based on 18 Buys and 3 Holds. The DIS average analyst price target of $209.89 implies approximately 19% upside potential to current levels. 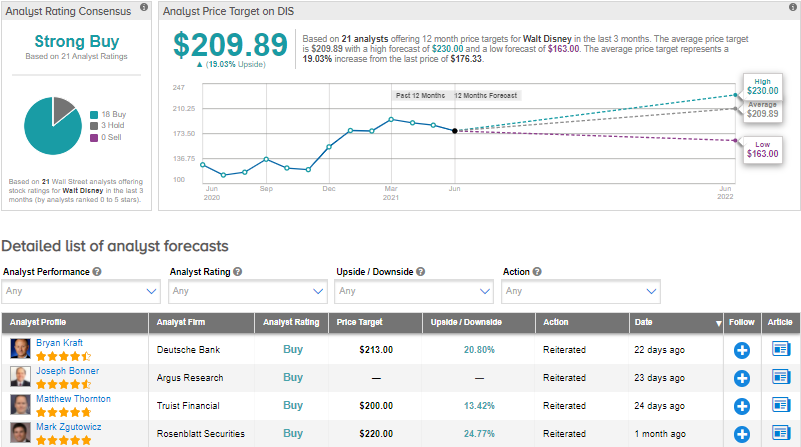 In the first quarter, the company posted revenues of $27.2 billion, up 2.2% year-over-year. The rise in revenues was mostly driven by a 5.9% increase in Cable Communications revenue which amounted to $15.8 billion. Comcast’s adjusted earnings increased 7% year-over-year to $0.76 per share in Q1.

Following the earnings, Oppenheimer analyst Timothy Horan upgraded the stock from a Hold to Buy and introduced a price target of $75 with an approximately 32.9% upside. Horan said, “CMCSA's growth outlook is improving across each segment coming out of COVID and we think now is an attractive entry point for investors.”

The company’s Cable Communications business had the best quarter on record with the addition of 461,000 broadband customers and total customer net additions of 380,000. According to Horan, while broadband demand and pricing is fuelling the rise in revenues for broadband, wireless business is turning profitable and scaling up.

Horan sees “more visibility” when it comes to the growth in revenues for NBCUniversal business this year as CMCSA’s premium streaming service, Peacock, has seen 42 million sign-ups in the one year since its launch. (See Comcast Corp stock analysis on TipRanks)

The analyst added, “This quarter signaled how strong its core cable business remains and that NBCU and Sky are recovering very well post-COVID. Government broadband subsidies could be a large positive. Having two Olympics within a year will be a major positive for Peacock and NBC. Investors underappreciate the potential for stock buybacks, Peacock, movies and advertising, in our view.”

Consensus among analysts on Wall Street is a Strong Buy based on 15 Buys, 2 Holds, and 1 Sell. The CMCSA average analyst price target of $63.78 implies approximately 13% upside potential to current levels. 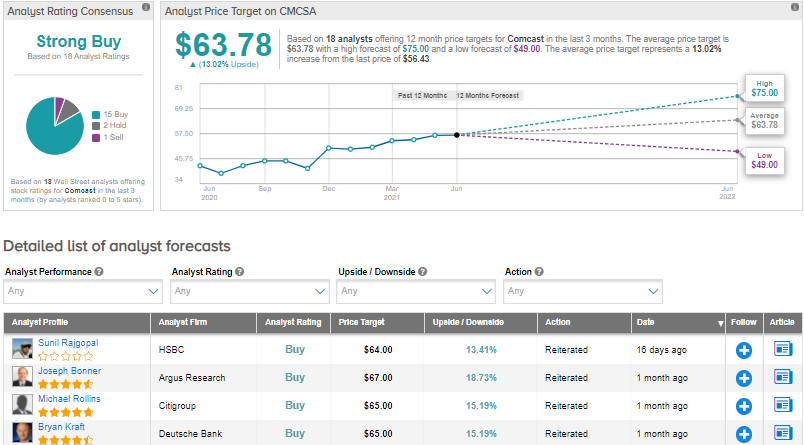 While analysts are bullish about both stocks, considering the upside potential over the next 12 months, DIS seems a better buy.