It’s all systems go at Disney (DIS) right now. While the House of Mouse’s 2020 was marred by pandemic upheaval which resulted in shuttered theme parks and closed movie theaters, both are now up and running which bodes well for the rest of 2021.

In fact, J.P. Morgan’s Alexia Quadrani believes now is a good time to load up on DIS shares.

“With its continued digital transformation and recovery at the legacy business,” the analyst said, “Disney remains our top pick in media in 2021, and we view current levels as a particularly favorable entry point for the long-term investor.”

The weekend saw the release of Black Widow – both in the theaters and via PVOD. The movie generated $80 million in domestic theatres, $78 million internationally, and raked in an additional $60 million through Premier Access. The release represents a box office record since the pandemic’s onset.

The hybrid distribution model might result in higher revenue initially, says Quadrani, but the analyst believes the premier access model “likely hurts the lifetime value” of the movie, as it is vulnerable to piracy at a far earlier stage of the movie’s release cycle. In any case, the analyst thinks the theatrical experience is one the company will be focused on in the coming months and with the return of exclusive theatrical windows, anticipates a “substantial improvement” in theatrical revenues FQ4/F22.

At the same time, in FQ3 (June quarter) Quadrani expects Disney+ subscriber growth to “slow sequentially,” although growth should be on the rise again in FQ4 (September quarter), following the Latin American launch of Star+ on August 31.

As for the parks business, here as would be expected, the recovery is “more firmly taking hold.”

By the September quarter, domestic parks should attain “normalized levels,” with customers’ “intent to visit” Walt Disney World back at 2019 levels again. On June 17, Disneyland Paris was once more open for business, which means that seeing out the June quarter (FQ3), for the first time since the pandemic began, all of Disney’s parks were open.

So, good news for Disney, but what does it all mean for investors? Quadrani rates DIS shares an Overweight (i.e. Buy) along with a $220 price target. The figure suggests ~23% upside by the end of the year. (To watch Quadrani’s track record, click here)

Wall Street’s analyst corps are mostly in agreement with J.P. Morgan’s assessment. Based on 17 Buys vs. 3 Holds, the analyst consensus rates DIS stock a Strong Buy. The forecast is for share appreciation of ~18% over the coming months, given the average price target currently stands at $210.89. (See Disney stock analysis on TipRanks) 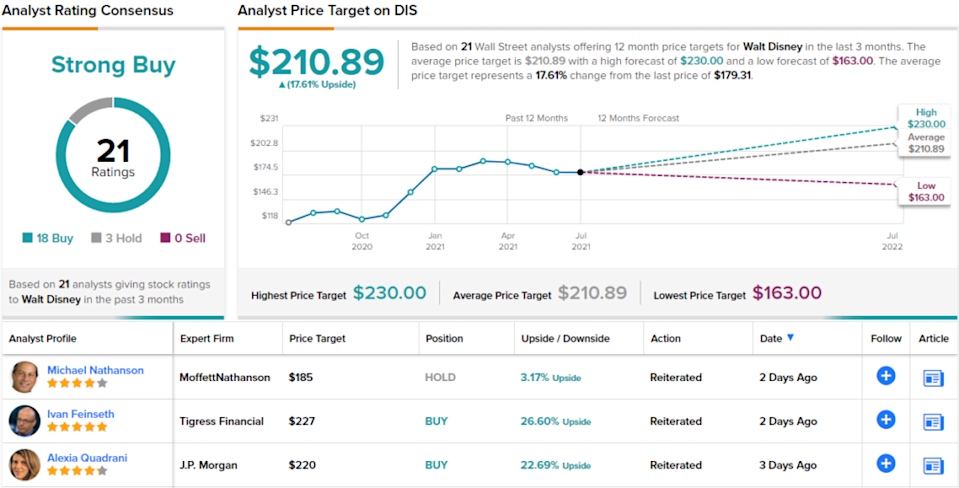