At last check, the Dogecoin price is seeing green along with the broader cryptocurrency market, up 3% to USD 0.31 after trading in the doldrums over the weekend. The latest gains buoyed Dogecoin’s market cap back above USD 40 billion, which according to one market leader is overvalued territory.

Barry Silbert, who is at the helm of Digital Currency Group (DCG), has a dire prediction for the Dogecoin price. Like much of the cryptocurrency community, Silbert was waiting for the bitcoin price to reach a bottom over the weekend but was left disappointed by the persistent selling. According to a tweet, he believes that Dogecoin “will be the tell” for crypto market capitulation, pointing to its weekend market cap of USD 37 billion and predicting that “it’s going back to sub USD 1 billion.”

Not surprisingly, Silbert was the target of attacks by the DOGE community. After calling the cryptocurrency a “gamble trade” and suggesting there are other places to earn 10x on your money, Dogecoin co-founder Billy Markus, whose Twitter handle is Shibetoshi Nakamoto, took aim at the DCG chief. Silbert said that he was “looking to help people not lose money,” and it seemed to set the Dogecoin co-creator off. Markus, who sold all of his DOGE holdings years ago but still accepts tips in the cryptocurrency, accused Silbert of being “disingenuous,” which ignited a firestorm of tweets between them. 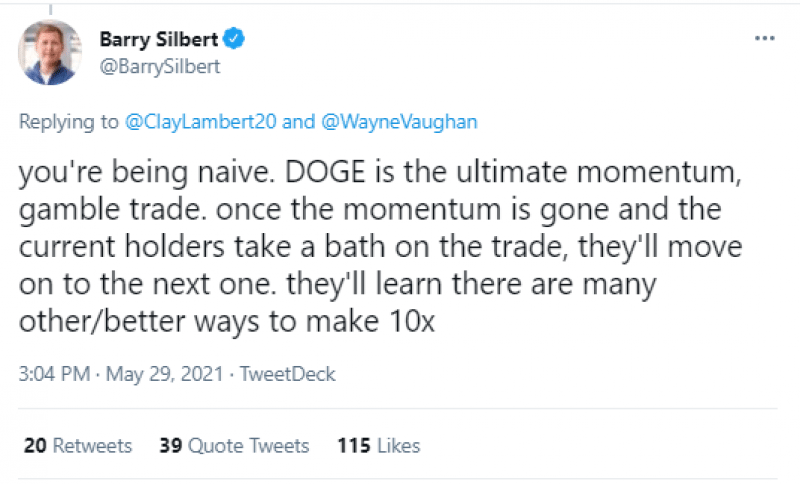 In a nutshell, Silbert fails to see the “usefulness or utility” that Dogecoin brings to bear, saying that its value comes from a “collective belief,” which is why DOGE is overvalued in his opinion. Bitcoin, on the other hand, has both of those features — usefulness, and utility — Sibert says. While Digital Currency Group probably won’t be launching a Dogecoin Trust anytime soon, Silbert did say that if someone can prove him wrong about Dogecoin, he would “be a buyer.”

Despite the DOGE drama, Dogecoin investors are focusing on future catalysts for the seventh-biggest cryptocurrency. Chief among these is an upcoming listing on cryptocurrency exchange Coinbase, which CEO Brian Armstrong tipped his hand to during a recent investor call.

The listing, which is reportedly planned for the coming weeks, is widely expected to lift Dogecoin’s profile even higher given the exchange’s recent Nasdaq listing as well as its reach to some 56 million users. Coinbase’s listing comes on the heels of rival cryptocurrency exchange Gemini as well as zero commission trading app Robinhood Crypto doing the same.