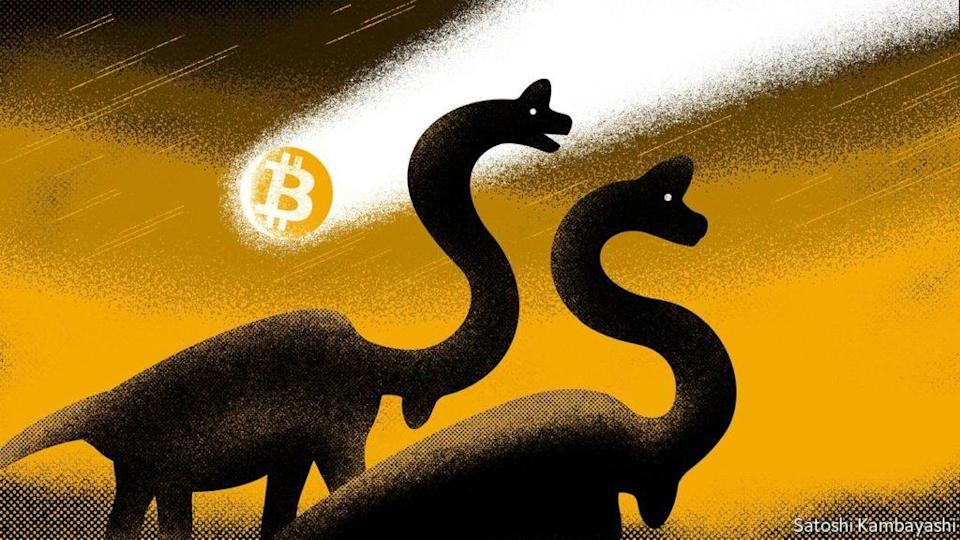 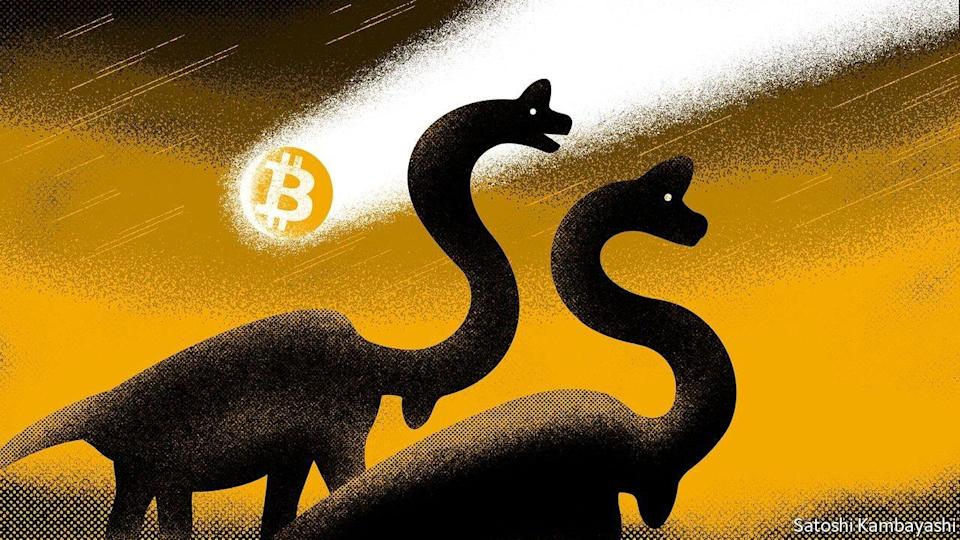 I’ve had this Economist image on my desk for the past 7 days, and it’s very likely to become my wallpaper this weekend when I finally toss the May 29 issue. I call it Crypto Asteroid Destroys Banking Dinosaurs. Their artwork is always strong and this one speaks to me. Notice the dollar signs in the necks of the dinosaurs.

Of course the piece itself is deeper than that. It’s about whether crypto is a side show or a legit part of finance. It’s mostly focused on Bitcoin, but notes in one critical line that Ethereum has a more compelling use case.

I’m a banking dinosaur who’s only now forming opinions on crypto, which include:

– Only Bet What You Can Lose: For now, it’s better to view crypto as a purely speculative bet than an investment. Treat it like a Vegas trip. If you’re going to spend a few grand on a Vegas weekend and you’re also interested in the markets, maybe skip Vegas and buy the crypto. But treat the buy just like you’d treat the Vegas trip: lost money unless you get lucky.

– Know Your Blockchains: The Bitcoin blockchain and its bitcoin currency is believed by zealots to be a universal replacement for cash. We’re very far from that, so bitcoin’s gold-like scarcity (only 21m coins) and fame fuel arguments for it being an inflation hedge and a good long-hold investment. The Ethereum blockchain has much broader applicability — it’s basically a world computer that developers can build new companies and apps on (sort of like the web was built off the http protocol). As for its ether currency, that’s way more confusing because it doesn’t really have a supply cap. But of course people WAY smarter than me have theses as to why it’s also a great long bet.

– Know What Is/Can Be Build On Your Blockchain: I’ve asked some folks who’ve bought ether to explain what’s being built that they’re interested in, and they’re stumped immediately. Not a knock on them, just evidence there’s a sh!t ton of speculators out there. I recently bought my first crypto called Hash that’s the currency for the Provenance blockchain, which intended to modernize mortgage and consumer lending — among many other use cases. I’ll explain more in another post, but for now, I’ll say I bought it partly because of the (albeit large 100b) fixed coin supply, and mostly because I feel like I understand the potential of this blockchain and what’s being built on it. That’s my thesis more so than the price of the associated currency.

– Buy In Slowly: And sure enough, I know nothing about the currency. I bought in the first few days Hash went live, and it’s halved since then. I thought the recent rout in major cryptocurrencies would result in more investment in this new coin, but not enough people know about this one yet. Also I should have bought in slowly so I could bid more shares on the way down, but instead I just took all the money I planned to bet and bet it all at once. Stupid. But whatever — it was 15 cents a share. And I don’t plan to sell anytime soon. Because my thesis also believes that the Provenance blockchain play is just getting started.

Does my first foray into crypto investing — I mean betting — make me a dinosaur that got destroyed by the crypto asteroid in a different way? More on that next time.

For now, enjoy this image. And links below on the piece/artist it came from.

– Boundary between crypto and fiat money is becoming more permeable

– The artist that did this illustration is named Satoshi – seriously

DO YOU LIKE MONEY? GET MORE AT THE BASIS POINT®