Commerce Secretary tells how to fix the crazy car shortage

They sit parked in megalots all across North America — next to a big stone quarry in Troy, Missouri, by an auto assembly plant in Silao, Mexico, and filling the vast parking areas outside the Kentucky Motor Speedway near Owensboro. Tens of thousands of bright, shiny, never-been-driven Ford (F) and GM (GM) trucks and SUVs.

They appear to be ride ready, but they aren’t. Buyers are lined up to buy them, but they can’t. The problem, as you might have guessed, is the vehicles have no chips.

And so these cars and trucks wait in purgatory, more than $1 billion worth of them*, washed by the rain and glistening in the spring sun, a silent testament to the global chip shortage brought about by unprecedented COVID-19 conditions and some ill-advised decisions, as well.

The pandemic of course forced thousands of small businesses around the world to close. It gut punched the airline, hotel and cruise ship businesses. Commercial real estate was socked too. At the same time, the likes of Zoom, Peloton, Big Tech and the rest of the stay-at-home economy went to the moon, as they say. Those trends and outcomes — both positive and negative — were pretty readily predicted and recognized by this time last year.

Few saw, however, what would happen to the semiconductor and auto industries. Before I get into what transpired and our path forward, a quick word or two about just how bad the situation is.

How bad is it Andy?

So bad that if you are shopping for a pickup and looking for a specific make or model right now, forget it. You'll be lucky if the dealer has much of anything. Billionaire Jeff Gundlach recently told Yahoo Finance’s Julia LaRoche he wanted to buy a new truck but had to settle for a used one. “According to Gundlach, the truck he purchased had 8,000 miles on it, but was only $2,000 less than the sticker price of a brand new truck.” No deals for billionaires even. Used car prices, by the way, are soaring, up 10.0% in April and 21% over the last 12 months.

How bad is it? So bad that old-timers are scratching their heads. Usually the problem for a car dealer is too many cars and not enough customers. Now, it’s the opposite. Last Saturday I spoke with a dealer in New Jersey who’s been in the business for 40 years. (He wanted to remain anonymous so as not to get HQ peeved.) "When was the last time, you’ve seen a shortage of cars like this," I asked? “Never,” he told me shaking his head, “not even close.” That explains why a few minutes earlier the dealer’s eyes had lit up when I drove in to return my leased 2017 Escape. “I can use that car,” he had said hungrily.

How bad is it? So bad that GM is scrapping fuel-saving technology that requires chips on certain V8-powered Silverado and Sierra pickups. Meaning essentially that these trucks are devolving. So bad that Ford is cutting back and or halting production at eight assembly plants in North America that make Mustangs, Escapes, the popular new Bronco, oh and the F-150 pickup, the best selling vehicle in America. This of course on the heels of the rollout of its all-electric F-150, replete with a test drive by President Biden. (EVs need the same or more chips, in case you were wondering.) Ford now says the debacle will cost it some $2.5 billion in earnings this year. 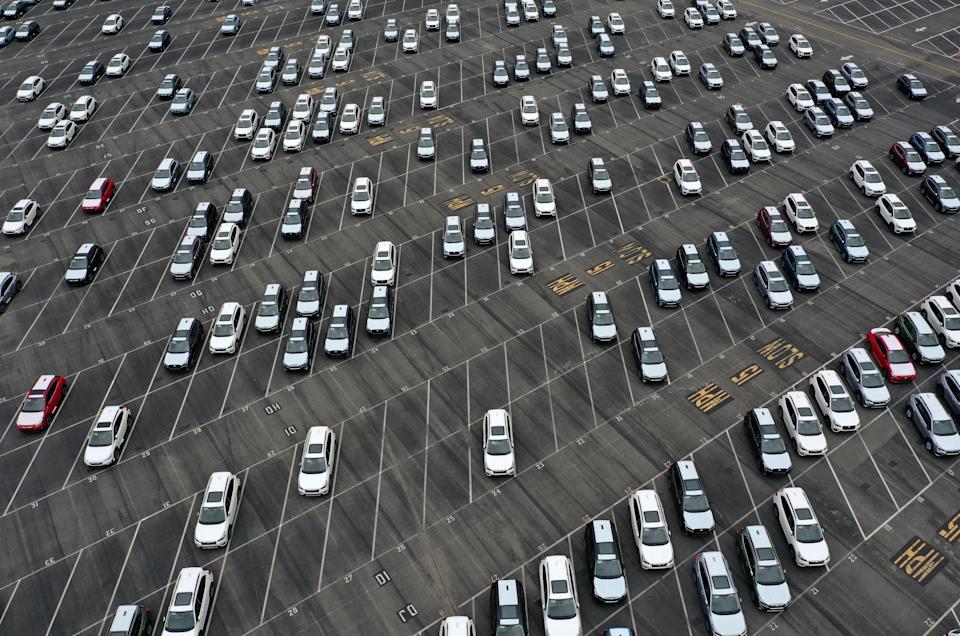 RICHMOND, CALIFORNIA – MAY 14: In an aerial view, brand new Subaru cars sit in half empty storage lot at Auto Warehouse Co. on May 14, 2021 in Richmond, California. New cars are becoming hard to find and the prices have surged as dealerships are having trouble with inventory due to the global chip shortage and global supply chain issues brought on by COVID-19-related complications. (Photo by Justin Sullivan/Getty Images)

So bad that workers at auto plants are being told to stay home and it’s maybe even affecting the economic recovery. I spoke with U.S. Commerce Secretary Gina Raimondo on Thursday and asked her if that was in fact the case.

“In part, yes, absolutely,” she told me. “If you just take the auto industry, which is obviously a very, very important industry with a lot of jobs, but just in that one industry, we have thousands of folks furloughed right now. And that's true in other industries as well. So yes, absolutely.”

It’s so bad that it could end up costing the U.S. auto industry $110 billion, according to AlixPartners, an industry consulting group.

So bad that Detroit has added a new phrase to the automaking lexicon, “build-shy,” which is when a carmaker builds a vehicle just shy of completion, (i.e., without the chips), to keep the factories working and jobs in place. (All those cars in those aforementioned lots are “built shy.”)

It’s so bad that President Biden has been on the case for months (to no avail) and so bad that Raimondo is working it nearly full time, meeting with auto and chip executives trying to craft a solution.

“This is a real problem,” Raimondo acknowledged. “Ford is going to be down over a million cars this year. Look at the price of used cars. Used car prices are through the roof. Why? Because this is a shortage of new cars. Why? Because they can't get their hands on enough semiconductors. So the ripple effects throughout our economy because of semiconductor shortages are extensive.”

So we have auto shortages and billions of dollars of car sales lost, prices gone bananas for used cars and thousands of jobs at risk. What the hell happened? Well, COVID yes, but executives made some bad calls too. That plus over-dependence on a fragile and non-U.S.-based supply chain.

Before I get into detail there, you should know that electronics, (i.e., mostly chips) now account for some 40% of a car’s cost, up from 18% in 2000. “The microprocessors and chips that power modern vehicles are now so prevalent that they're practically a commodity in the same vein as steel and aluminum,” according to Car and Driver. “Computers are used in everything from the mundane (such as basic trip computers) to the near magical (think road-scanning active suspensions). They've made cars quicker, safer, cleaner, more efficient, and more reliable—better in every way.” (There are a number of other great stats and graphics about the auto business and chips in this Deloitte report beginning on page 12.)

And now for the tick-tock on exactly what happened to the auto industry that put them in this pickle. For an explanation here I’ll turn it over to our tech writer extraordinaire, Dan Howley, from this article.

“The automotive industry has been particularly burned by the chip shortage due to the way its supply chain works. Automakers tend to run incredibly lean on supplies for vehicles to keep costs down. But the coronavirus pandemic upended that entire system.

When the pandemic began, automakers, figuring consumers would slow down auto purchases, cut down on their supplies of semiconductors used in everything from their vehicles’ infotainment systems to high-end driver-assistance technologies.

But consumer interest in vehicle purchases rebounded faster than the automakers had predicted. And by Q4 2020, they were outpacing Q4 2019 sales numbers. At the same time factories remained idling due to coronavirus restrictions, putting automakers even further behind.

While that was happening, people around the world began buying up consumer technology goods to adjust to the pandemic induced work-from-home and remote learning environments. With automakers not purchasing chips, semiconductor makers started working on chips for consumer tech products.

Once the automakers realized they needed more chips than they thought, the chipmakers were already dedicating time to making chips for consumer tech companies.”

“Right now [automakers] are competing in the supply base with phones, and notebook computers,” Willy Shih, professor of management practice in business administration at Harvard Business School, told Yahoo Finance. “Apple (AAPL) will sell more iPhones in the first three months of this year than all the automakers combined will sell vehicles in the whole year. So then if you're a semiconductor maker who's the more important customer?” 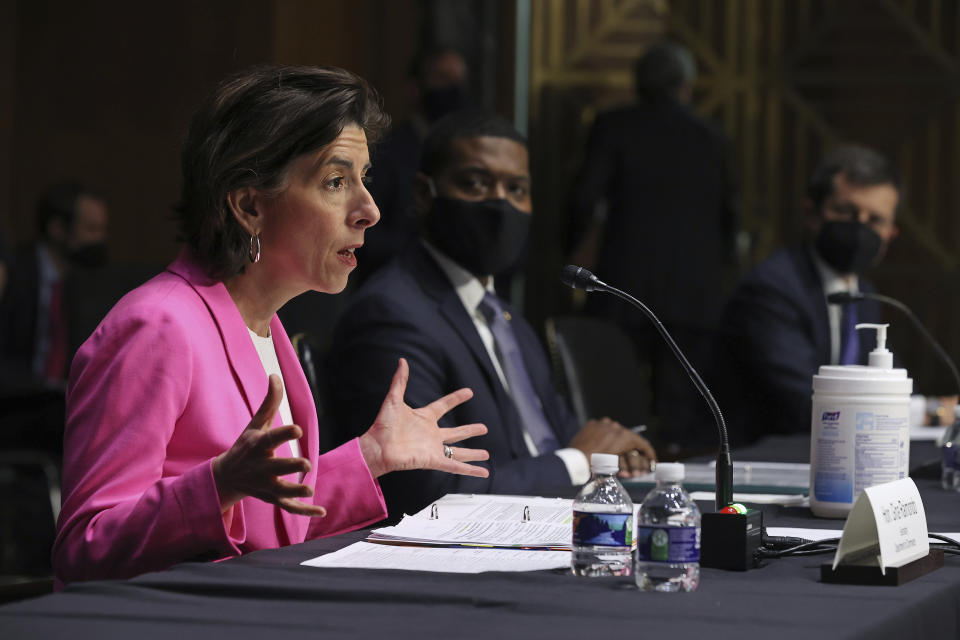 A big problem here is that most chips are made overseas, with the U.S. now accounting for only some 12% of chip capacity, a point not lost on Raimondo. “So yes, we're 12%. We want to get ourselves back up to 25% plus,” she told me. “Within the 12%, if you look at what they call bleeding-edge, the most sophisticated chips, right now we're at 0%. And so that's an area where we want to really invest, so we get ourselves to a place where we can meet our demand in, say, 10 or 12 years.”

That will take investment. Senator Chuck Schumer wants to allocate $52 billion towards this shortage as part of the Endless Frontier Act. I asked Raimondo if that was enough.

“(While] I would urge Congress to pass that as swiftly as possible, I don't think anyone thinks $50 billion is enough to solve the problem,” she said. “But this is the beginning of a long term journey. And the hope would be that that $50 billion would unlock another $50 billion and $100 billion or more from the private sector, which in total would be really very meaningful in order for us to make chips in America and regain our tech leadership in the most sophisticated chips.”

Should the automakers change their chip inventory practices going forward, I ask? Should they hold more in reserve? Is there too much just-in-time inventory being practiced?

Forget about us building up bleeding-edge chip capacity in 2030. Even just getting back to normal inventory levels will take months. Some say in the fall, some say next spring. And while we know COVID-related disruptions will abate soon enough, bigger issues, like relying on overseas partners that don’t share our goals, and the decline of manufacturing in the U.S., even when it comes to the highest of high tech like chip fabrication, remain.

There’s enough blame to go around when it comes to auto executives not realizing that COVID would actually create a spike in demand for autos. To be fair though that was not an obvious call.

Less forgivable perhaps is squeezing every last nickel out of the supply chain, which is actually a stakeholder capitalism issue. How is that exactly? Think about it. At whose behest really is the supply chain being squeezed? For the bottom line, i.e., the shareholder. The automakers, and others, stretched supply chain lines to the limit, to please investors. Now that the supply chain is broken, who pays the price? Employees (furloughed) and customers (no trucks, no SUVs.)

If supply chains were not designed to minimize cost and instead to maximize reliability and even to prioritize domestic supply (which would boost jobs in the U.S.), this debacle wouldn’t have happened or certainly not to this degree.

Raimondo is right. It is a long journey. Let’s hope we’re setting off on it now. So do the furloughed auto workers and the buyers of all those trucks and SUVs parked in Mexico, Missouri and Kentucky, sitting idle, waiting to be started.

*There are easily 25,000 cars, trucks and SUVs sitting in limbo and with the average light vehicle now costing $40,857, that gets you to $1 billion.