Several pre-revenue electric vehicle (EV) companies have ridden the SPAC wave as they look to raise funds. On the long list of such companies is luxury EV maker Lucid Motors, which plans to go public via a reverse merger with Churchill Capital Corp IV (NYSE:CCIV). CCIV stock is up an impressive 19% in the past month. 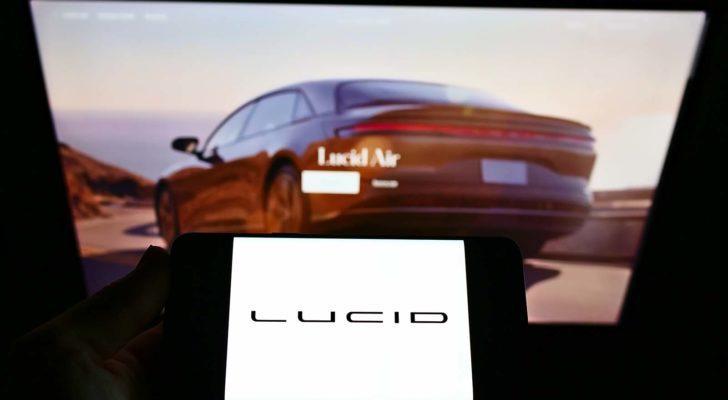 The Lucid Motors (CCIV) logo is displayed in front of an ad for the Air sedan.

Some investors are worried that the shares’ valuation is excessive, but Lucid Motors is already gaining traction with consumers, and the company is well-positioned for long-term growth.

Churchill Capital announced its merger with Lucid Motors back in February. The transaction, which assigned Lucid an equity value of $24 billion, included a PIPE offer of $15 per share. The deal is supposed to provide Lucid with $4.4 billion and close in the latter half of the second quarter.

The primary concern for investors at this point is Lucid Motor’s post-merger valuation. Lucid has a committed management team, a strong financial outlook, and increasing traction with customers. Based on its sales projections and current share price, CCIV stock should climb.

Lucid Motor’s flagship luxury electric sedan, Lucid Air, is slated to hit the roads later this year. It has already garnered over 9,000 reservations, potentially representing roughly $800 million of sales. Apart from the Lucid Air, the Lucid Gravity SUV is in development and is slated to be released by 2023.

Lucid currently has six retail stores across the U.S. and plans to add new stores across North America throughout 2021. Moreover, it intends to expand to Europe and the Middle East in 2022. Lucid is using a direct sales strategy and an online platform that offers its customers the option to customize their vehicles according to their tastes.

A Focus on Innovation

Lucid is focused on developing its brand as a luxury EV company that prioritizes technology and innovation. Currently, its Lucid Air sedan is the only battery-powered car with a range of more than 500 miles per charge. The company has leveraged its proprietary battery technology to reach that milestone.

All of the company’s vehicles will be compatible with Electrify America chargers that are located across the United States. Moreover, Lucid’s EVs are equipped with the “DreamDrive,” the company’s advanced driver assistance system, featuring LIDAR sensors that facilitate a safer driving experience. Additionally, the Lucid Air has features that support the deployment of self-driving technology down the line.

Lucid operates a factory in Arizona where it will be producing its batteries and vehicles. The factory has an annual capacity of 400,000 units and will enable the company to lower its per-vehicle costs. Lucid has already manufactured battery systems in Silicon Valley.

The Bottom Line on CCIV Stock

CCIV Stock has had a roller-coaster run on the stock market, but it has been on a positive trajectory lately. Its merger target, Lucid Motors, has already received many pre-orders and expects to deliver strong revenue growth over the next few years.

Though that ratio is relatively high, it will continue to go down in subsequent years. As a result, I believe that the concerns about its post-merger valuation are overblown, and I recommend that investors buy CCIV stock at this stage.