Chipotle (CMG) on Tuesday posted a second-quarter earnings report that smashed Wall Stree't expectations thanks to the return of customers and digital sales — even as it faces some scrutiny for raising prices to offset the impact of the labor shortage.

Here’s what the California-based company reported, compared to Wall Street’s expectations, according to a Bloomberg consensus estimate:

"We remain confident in our key growth strategies and believe they will help us achieve our next goal of $3 million average unit volumes with industry leading returns on invested capital that improve as we continue to add Chipotlanes," Brian Niccol, Chipotle Chairman and CEO said in the release.

"Strong restaurant level economics combined with significant restaurant growth should allow us to optimize earnings power for many years to come."

Dine-in customers returned strong with comparable restaurant sales up 31.2 percent, however, digital sales did not take a hit from that rebound. Digital sales accounted for 48.5 percent of sales, growing 10.5 percent from a year ago.

This year the company plans to open approximately 200 restaurants.

This quarter, Wall Street is keeping a close eye on pent-up demand among Chipotle eaters, and the company's efforts to innovate digitally, especially any updates on its drive-thru "Chipotlanes."

However, labor availability and steeper menu prices are ongoing concerns for both Main Street and Wall Street alike. At the end of June, the company raised wages to $15 per an hour, which then was quickly followed by a 4 percent hike in menu prices. The move comes amid a broad labor crunch that's driving up costs nationwide.

"We believe limited pricing in the last two years, rising wages, and generally rising consumer inflation expectations offer air cover, but Chipotle fairly directly tied additional price in the fall to resistance to the most recent round," Jon Tower of Wells Fargo wrote a recent note.

BTIG Managing Director Peter Saleh told Yahoo Finance Live this week that while Chipotle may be the first to raise menu prices, it will not be the last.

"While they're the ones who have actually announced it, the rest of the industry is moving in the same direction we believe as well," Saleh said. "You're going to just see more and more price increases to offset this [raising wages]. There is a pretty severe labor shortage."

In general, Saleh says the average menu price increase per a year is "somewhere around" 2 percent every year, but expects "this year will be outsized" with the potential to be 3 percent or more at most fast food chains. 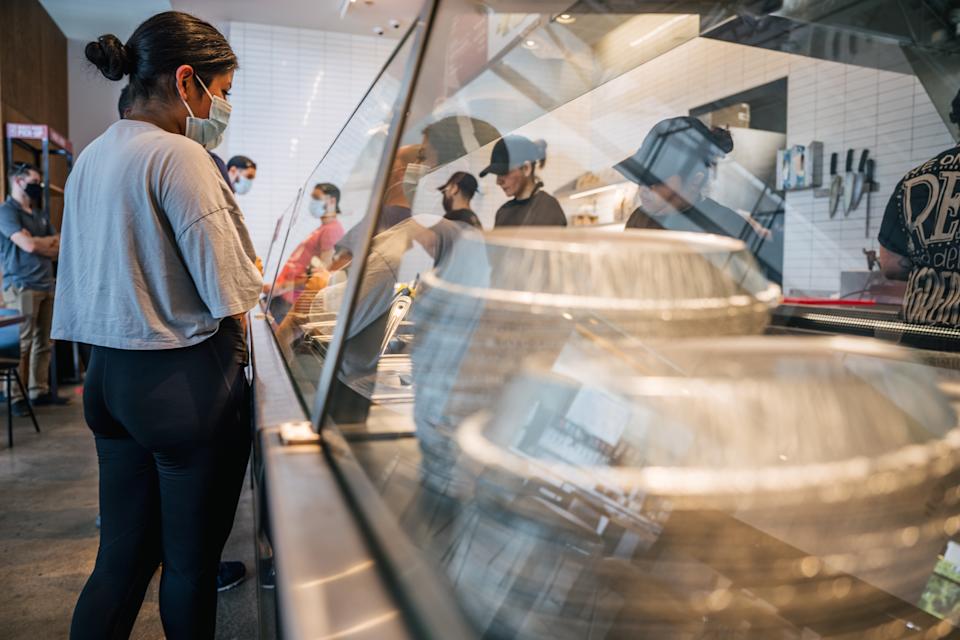 HOUSTON, TEXAS – JUNE 09: A woman waits in line for food at a Chipotle Mexican Grill on June 09, 2021 in Houston, Texas. Menu prices at the Chipotle Mexican Grill have risen by roughly 4% to cover the costs of raising its’ minimum wage to $15 an hour for employees. The restaurant industry has been boosting wages in the hopes of attracting workers during a labor crunch. (Photo by Brandon Bell/Getty Images)

However, the analyst remains bullish on the stock, reiterating it as a "Buy" last month with a price target of $1,725.

Nicole Miller Regan of Piper Sandler & Co. reiterated shares of Chipotle as "overweight" with a price target of $2,100 in a note last month, with optimistic about Chipotle's development pipeline with 200 new locations in fiscal year 2021.

"Although not specifically modeled, we are very encouraged by the ongoing supplementation of core new unit development with the build-out of next generation store/sales channels," Regan said in a note last month.

Shares of Chipotle are up following the report and up 14 percent year to date.

Brooke DiPalma is a producer and reporter for Yahoo Finance. Follow her on Twitter at @BrookeDiPalma or email her at bdipalma@yahoofinance.com. Check out her latest: