Chipotle Is Raising Menu Prices & Blaming It On “Employee Costs” 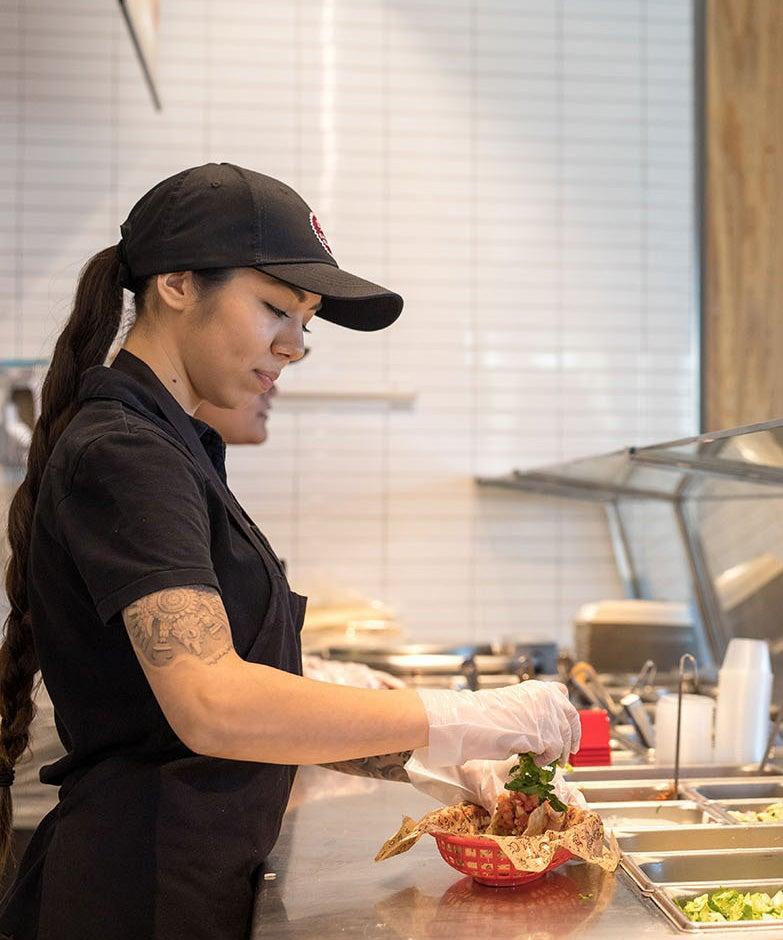 Next time you head to Chipotle, guac won’t be the only thing that costs a little extra. Your whole burrito bowl will, too. As of Tuesday, the burrito chain’s menu costs have risen by around 4%, following worker demands for increased wages and better labor conditions. At a virtual press conference on Tuesday, Chipotle CEO Brian Niccol said the company’s executives “really prefer not to” hike up prices, “but it made sense in this scenario to invest in our employees and get these restaurants staffed, and make sure we had the pipeline of people to support our growth.”

Chipotle announced in May that workers would receive an average payment of $15 an hour by the end of June. In a statement to Refinery29, a spokesperson confirmed that the menu price increase would “help off-set the wage increase that Chipotle is now offering its employees.” In other words, the marginally higher menu prices — Niccol said the price increase is akin to “quarters and dimes that we’re layering in” — will go towards fairly compensating current and future employees.

Many outlets ran with this reasoning: Reuters reported that “Chipotle raises menu prices as employee costs increase,” and the New York Times cited “labor costs” as the reason for the spike. But this frames the updated menu costs as a sacrifice consumers will have to make so that the chain’s workers — whose employer makes tens of millions a year — can earn a living wage. In reality, Chipotle’s executives should have been paying their workers appropriately all along.

“Chipotle is a multibillion-dollar company with one of the highest-paid CEOs on the planet,” Kyle Bragg, President of a New York-based branch of the Service Employees International Union, told Jacobin in May. “But it still pays most of its workers across the country less than $15 an hour.”

Niccol’s salary has only continued to grow over time. In 2020, Niccol received the highest compensation he’s made since he took over the reins as CEO in 2018. Per Newsweek, he was paid $38 million — a sharp increase from the $14.8 million he would have made if not for the pandemic-related modifications Chipotle implemented. This means Niccol made 2,898 times more than the median Chipotle employee in 2020, and actually earned more money during the pandemic than he would have had it not happened. Other executives, including CFO Jack Hartung, CTO Curt Garner, and Chief Restaurant Officer Scott Boatwright, also received pay increases last year.

Employees, meanwhile, saw their salaries go down. Chipotle confirmed to Newsweek that the average worker took a pay decrease as a result of government-mandated shutdowns and COVID-19 safety measures. A representative clarified, though, that Chipotle workers still made more than their peers working for competitors. “Since all Chipotle restaurants are company-owned, our employee population and resulting pay ratio is higher compared to industry peers that operate under a franchise model,” the company said in a statement.

Like many other restaurant chains, Chipotle has faced criticism, lawsuits, and a sharp decrease in prospective employees for understaffing and underpaying its workers. On May 8, a photo of an unknown Chipotle location went viral on Twitter. “Ask our corporate offices why their employees are forced to work in borderline sweatshop conditions for 8+ hours without breaks,” read a sign taped to the restaurant’s door. “We are overworked, understaffed, underpaid, and underappreciated.” And while employees at Chipotle have been attempting to unionize for awhile, they’ve faced a lack of support.

The exploitation of fast food workers has been an ongoing problem across brands and across the country, but the pandemic showcased just how little companies value the employees working tireless days for under $15 an hour — the same employees often considered essential workers. As a result, fewer people are applying to work at fast food restaurants, and the workers already there are facing increased hours and a heavier workload as a result, reported Business Insider.

Make no mistake: This is why Chipotle finally decided to pay employees fairly. If anyone is to “blame” for the extra 50 cents or so your next Lifestyle Bowl may cost you, it’s not the workers, who should have been making more money years ago. It’s the executives, who underpaid them from the beginning, while their own wallets grew fatter.

Like what you see? How about some more R29 goodness, right here?

What Changed For Garment Workers Since Rana Plaza?