It's been a choppy summer so far for semiconductor stock Micron Technology, Inc. (NASDAQ:MU). The firm is fresh out of the earnings confessional, reporting last Thursday, July 1, with its stock suffering a bear gap even after its quarterly report topped analysts' estimates. Putting even more pressure on MU is the 60-day moving average, which the equity has only settled north of once since late April. While Micron stock is attempting another run-up to this trendline — the stock was last seen up 0.3% at $80.58 — bulls should be cautious of using this post-earnings pullback as an entry point, as there's reason to believe MU isn't done cooling off just yet.

The chip concern just landed on Schaeffer's Senior Quantitative Analyst Rocky White's list of S&P 500 (SPX) stocks with the worst returns in July, going back 10 years. According to White's data, MU has only seen two positive one-month returns since 2011, averaging a 1.2% drop in this time period. It's also worth noting that MU is the only tech stock to show up on the list, which looks to be dominated by energy and media names. And while a 1.2% drop isn't completely devastating, with several layers of support still in place including the 180-day moving average, it could be a sign to wait out the summer doldrums before claiming stake in MU. 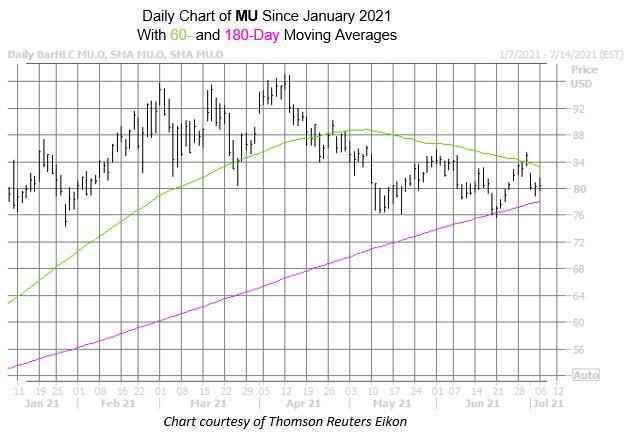 A shift in analyst sentiment could also put pressure on MU. The equity received a bull note from BMO right before earnings, which initially gave the shares a boost, though this was clearly short-lived. The security sports 17 "buy" or better ratings, and just four "hold" ratings. What's more, the 12-month consensus price target of $118.31 is a hefty 47.7% premium to current levels.

Short interest is on the rise, up 2.5% in the last two reporting periods, but there's plenty more room on the bearish bandwagon. The 24.17 million shares sold short make up just 2.2% of the stock's available float, or a little over one day at MU's average daily pace of trading.