With shares sitting 73% into the red in 2021, it’s safe to say, Chemocentryx (CCXI) investors have endured a difficult year so far. The alarming decline has mostly been due to one event; in May, an FDA advisory committee expressed reservations regarding the application for avacopan, Chemocentryx’ treatment for anti-neutrophilic cytoplasmic autoantibody (ANCA)-vasculitis (AAV) – a rare disorder which can lead to inflammation and even destruction of small blood vessels.

On Tuesday, however, the company had some positive news concerning the drug. Following discussions with the FDA, ChemoCentryx announced that it has filed an amendment to the NDA (new drug application) for avacopan which seeks to address the issues brought to the fore during the FDA Advisory Committee meeting.

According to the FDA, the re-filing represents a major amendment to the NDA and will result in a new PDUFA date of October 7, pushed back from the prior July 7 date.

The three-month extension is not “totally unexpected,” says Raymond James’ Steven Seedhouse, who believes the Street will take this as a positive development.

While Seedhouse thinks Wall Street was giving the drug a 10% chance of approval, the analyst believes it will now “price CCXI more accurately” to reflect the 50/50 odds of approval – Seedhouse’s forecast.

“The data package and AdCom vote (10-8 on the key benefit/risk question with one ‘yes’ vote a very tepid and caveated yes) are supportive of approval in our view, but we think the generally negative tone of FDA's reviewers and select AdCom panelists will remain fresh in the Street's mind and offer a credible bear thesis into an approval decision,” Seedhouse said. “Therefore, setup is still risky and uncertain, but we like betting on good drugs with good data, which is the bet to be made here.”

Seedhouse says the company sees the extension as a “positive step” and notes that while the ball is now clearly in the FDA’s court, CCXI is ready to answer any questions should there be any additional details the FDA wants to discuss or review during the next three months.

Unlike Seedhouse, H.C. Wainwright’s Edward White assumes only a 15% PoS (probability of success) for avacopan in AAV, although should the drug gain approval, the 5-star analyst expects a 4Q21 launch and anticipates there could be sales of $5 million in 2021, which in 2022 will increase to $101 million.

To this end, White rates CCXI shares a Buy along with a $28 price target. Hitting White’s target could yield returns of ~67%. (To watch White’s track record, click here)

Overall, Wall Street’s analysts hold a range of views on CCXI. The stock has a Moderate Buy analyst consensus rating, based on 7 reviews, including 4 Buys, 2 Holds, and 1 Sell. Shares are currently priced at $16.77, and the $36 average price target implies a one-year upside of ~115%. (See CCXI stock analysis on TipRanks) 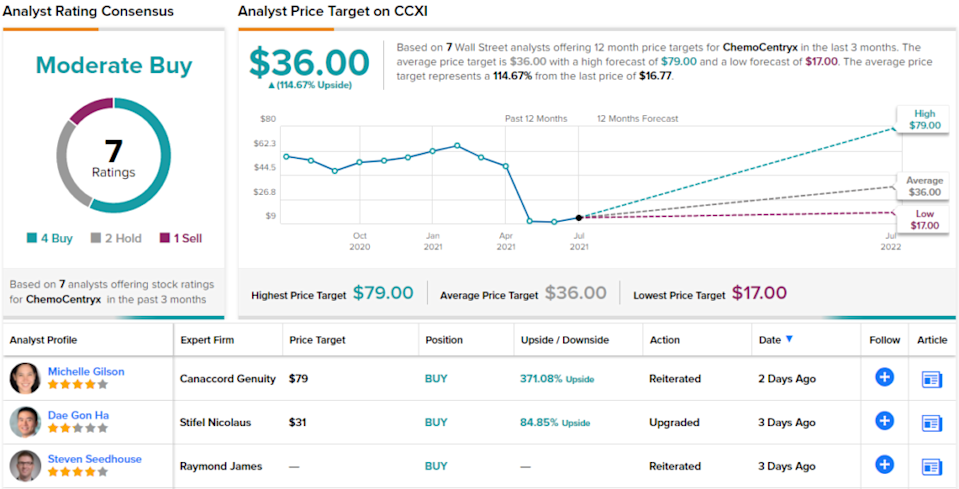