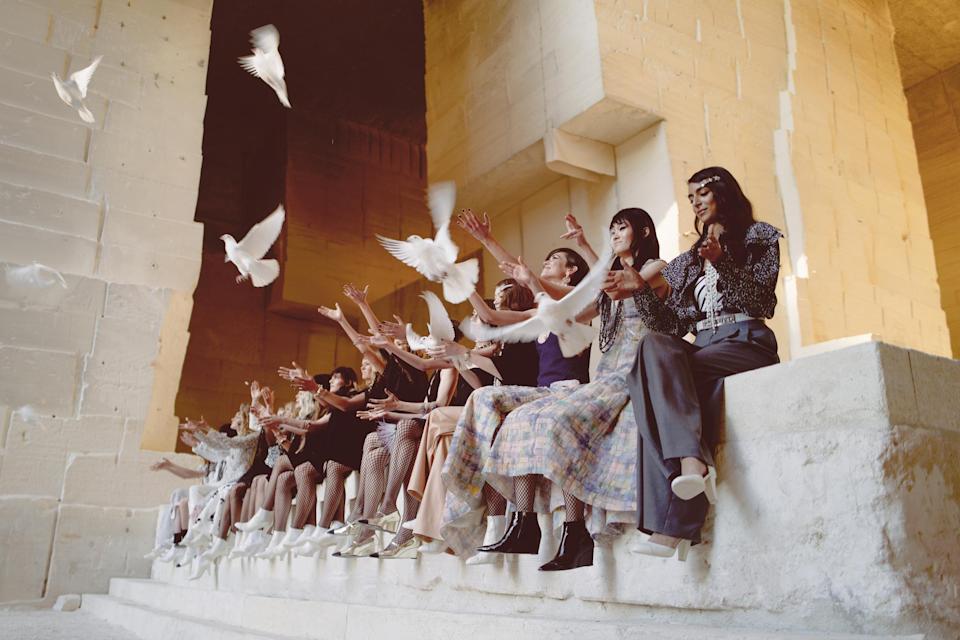 PARIS — Chanel said revenues grew by double digits in the first six months of 2021, and its full-year operating profit margin is on track to return to 2019 levels.

The French luxury house reported on Tuesday that revenues totaled $10.1 billion in 2020, down 18 percent at comparable rates.

This was in line with the forecast by Bruno Pavlovsky, president of fashion and president of Chanel SAS, who said in June 2020 that the company was expecting a double-digit drop in sales for the full-year. Chanel underperformed competitors such as luxury conglomerate LVMH Moët Hennessy Louis Vuitton, which saw revenues decrease 16 percent at constant exchange rates in 2020; Kering, which reported a 16.4 drop in organic sales, and Hermès International, which recorded a 6 percent decline.

In terms of profitability, the group, which is privately owned and run by the Wertheimer family, fared even worse. It logged an operating profit of $2.05 billion, down 41.4 percent from the previous year, as it poured investments into its staff and infrastructure, even as sales faltered due to the coronavirus pandemic.

By comparison, operating profit was down 28 percent at LVMH, 34.4 percent at Kering and 15 percent at Hermès.

Philippe Blondiaux, chief financial officer of Chanel, said the figures reflected the company’s commitment to protecting its staff, supply chain and business partners during a “delicate and painful” year. For instance, Chanel declined to take advantage of government schemes to furlough its staff, and acquired some of its financially struggling suppliers.

“We’ve done this while we knew very well from the start that this would have a negative temporary impact on our margins and cash flows,” he said. “So we believe we’ve taken a different approach compared to many other companies. And if we look at where we are today, and the fact that we are bouncing back so quickly, that was probably the right thing to do, and how we behaved as a company during this crisis is what our employees, our customers, our partners will remember for the very, very long term and this will pay off.”

He added that Chanel’s portfolio of activities differs from that of most competitors.

“Our fragrance and beauty portfolio is much bigger proportionately than any of our peers and this business, for example, has suffered tremendously from the absence of duty-free business. So you know, we can compare, but I think it would be probably misleading to try to compare at consolidated top line level,” Blondiaux said.

He reported that momentum has been growing since last fall, and revenues at Chanel between January and June 2021 grew by double digits versus the same period in 2019, the year that is being used as a comparison base by most companies. He had initially predicted it would take up to two years to return to 2019 levels.

“I’m very happy to have been proven wrong on this forecast. And we are already not only back to 2019, but way ahead of our 2019 numbers, and it’s the same for our margin,” he said.

If current trends are maintained, the operating profit margin for 2021 should bounce back to between 28 percent and 29 percent, after dropping to 20.3 percent in 2020, he added.

Blondiaux noted that Chanel was thriving despite the fact that it is one of the few luxury companies that does not sell its ready-to-wear or leather goods online, a position it will not budge from in the near future.

“The performance we are having in 2021 shows that it’s tenable,” he said. “We are firm and we remain firm on our principle, which is not to sell them online.”

However, he noted Chanel developed a number of digital tools during the pandemic, when its boutiques were closed, to help its sales staff stay in touch with clients, organize fitting sessions at home and get products delivered. Around 20 stores remain closed out of 206 worldwide, mainly airport boutiques.

To wit, Chanel’s investments in 2020 soared to $1.12 billion, a record high, up 45.3 percent versus 2019 as the company continued to invest heavily in its store network, offices, manufacturing and logistics, as well as digital initiatives and sustainability measures.

This included the acquisition of its New Bond Street flagship in London in October 2020 for a reported 310 million pounds, 70 million pounds more than the asking price. While Blondiaux declined to confirm that figure, he added that “it’s not completely wrong.”

Chanel is expanding and renovating its Beverly Hills boutique, which sells fashion alongside watches and fine jewelry, and is due to reopen in 2022. It is also growing its network of standalone fragrance and beauty boutiques.

In addition, some 600 artisans earlier this year moved into a sprawling building in the north of Paris that houses more than a dozen of the company’s specialty ateliers. The list of these continues to grow, with 39 entities sitting within the group’s Paraffection division.

“We continue to vertically integrate and we continue to invest in a number of companies,” Bondiaux said. “We are looking for new and sustainable materials, whether it’s for leather, cashmere or in different areas, and we will make a statement when we have something which is scalable, and which can be industrialized.”

The executive reiterated his by-now customary statement that Chanel was not for sale, and added that it not in the market for a major acquisition either. “We’re not selling, we’re not acquiring any of our competitors,” he said.

However, he confirmed the company has started making plans for the succession of its 72-year-old chief executive officer Alain Wertheimer.

“Alain Wertheimer is still in great shape and continues to run the business on a daily basis. And succession planning at Chanel, like everything we do, is done with a very long-term perspective in mind. So yes, there is succession planning which is being prepared at all levels of the company, and that’s true for the CEO, but we keep that internal for the time being,” he said.

While no region was spared, Europe was hardest-hit by the fallout from COVID-19, which forced stores to close and grounded international travel. Sales in the region fell 36.4 percent to $2.89 billion, while revenues in the Americas were down 15 percent to $1.97 billion and Asia Pacific declined 3.1 percent to $5.26 billion, Chanel reported.

Fashion sales were up by double digits in all categories before the onset of the pandemic. While trading was heavily impacted by the closure of stores worldwide, this was slightly offset by the development of new client-facing tools, including an app launched in May in different regions providing concierge shopping services for established clients.

Strong growth in online sales of fragrance and beauty partially compensated for the impact from the decline of travel retail. The segment was buoyed by the performance of skin care, in particular the Sublimage and Le Lift lines, while No 5 prepared to celebrate its 100th anniversary in 2021 with new face Marion Cotillard.

Sales of watches and jewelry were “resilient” with double-digit revenue growth for the Coco Crush line. Last year also marked the 20th anniversary of the J12 watch, and the launch of the first high jewelry collection dedicated entirely to tweed.

Last year, the company laid out its sustainability goals in an initiative known as Chanel Mission 1.5 aimed at tackling climate change in line with the targets of the 2015 Paris Climate Agreement. Every move is geared toward limiting mean global temperature increase to 1.5 degrees Celsius, a figure set out in the Paris agreement, and addressing waste across the company.

Scope 3 emissions, which encompasses all indirect emissions that occur in the value chain, were down 24.9 percent. Chanel added that it sourced 70 percent of its electricity from renewable resources, versus 50 percent in 2019, as it works to shift to 100 percent renewable electricity on a worldwide basis by 2025.

Last September, it raised 600 million euros through the issue of a sustainability bond on the Luxembourg Stock Exchange.