The FDA’s recent approval of Biogen’s Aduhelm (aducanumab) has been a transformative event for the Alzheimer’s disease (AD) space. The go ahead from the regulators amounts to a first for a treatment addressing the underlying causes of the memory-decimating disease and opens the previously locked door for others to enter.

Cassava Sciences (SAVA) is one such name hoping to make its mark in the space, and going by the data available so far, the company’s AD candidate simufilam appears to be very promising. After 6 months of treatment in an open label study, the interim data showed simufilam improved patients’ cognitive functions and behavior.

To say the market liked the company’s progress would be an understatement. Shares are up 1,037% year-to-date. What’s more, there is also a near-term catalyst to look out for.

At the 2021 Alzheimer's Association International Conference (AAIC) in July (26-29th), Cassava will present data from the open label study of 50 mild to moderate AD patients following 9 months of treatment.

JonesTrading analyst Soumit Roy says that if the drug can maintain its cognition score (ADAS-Cog11) compared to the baseline levels, it would send “clear indications of a disease modifying drug.” To show an improvement in the score vs. the baseline after the 9-month period would be a “clear win.” Keep in mind, that even Biogen and Eli Lilly’s offerings showed a decline following 9 months of treatment.

Roy “remains positive” ahead of the anticipated readout, although warns investors of possible market swings.

“Cassava’s stock has been volatile, and we could continue to see volatility into the July catalyst – profit taking closer to the readout, followed by a rally into 3Q/4Q 12-month data,” the 5-star analyst said. “In the event of ‘sell on news’ scenario, we would be buyers of the stock if July data are positive.”

All in all, Roy rates SAVA shares a Buy and his $110 suggests ~42% upside from current levels. (To watch Roy track record, click here)

3 other analysts have recently reviewed SAVA’s prospects, and all have reached the same conclusion as Roy: Buy. According to these analysts, the shares are anticipated to add 28% of muscle over the coming months, given the average price target clocks in at $99.50. (See SAVA stock analysis on TipRanks) 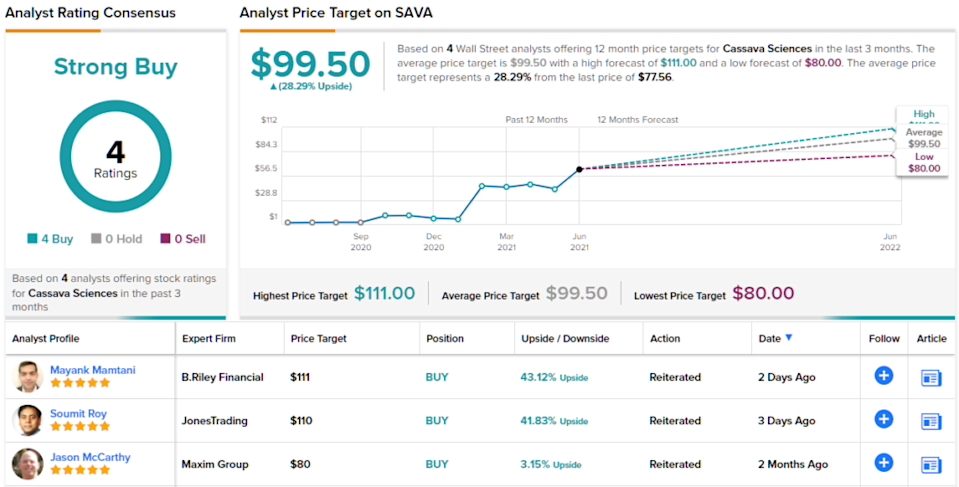