Can Alibaba Pull a Rabbit Out of Its Hat This Earnings Season? Analyst Weighs In

It has mostly been a downhill trip for Alibaba (BABA) stock since last fall. Beset by regulatory issues and confronted with a “remember whose boss” approach from the Chinese powers that be, last year’s strong post-pandemic growth has made way for a more subdued performance as reflected in the shares’ muted display over the past year.

Adding to the downbeat sentiment, Deutsche Bank’s Vitus Leung tells investors not to get hopes too high regarding the latest quarter, anticipating a “soft quarter ahead,” when Alibaba reports June quarter earnings in August, mostly due to “growing investment spend.”

Leung expects June-Q Adj EBITA to decline by 7% year-over-year to RMB42 billion, although the figure is slightly above the consensus estimate of RMB40 billion. The analyst sees revenue growing by 33% year-over-year, which is 4% below the Street’s forecast. Leung also calls for Cloud Adj EBITA to drop sequentially by 7.6%.

Apart from looking out for “active user numbers,” the analyst tells investors to keep an eye on investment spending.

“Strategic investments would be front-loaded, and mainly in the community marketplace segment, Taobao Deals, on merchant retentions,” Leung noted. “We expect BABA to follow through on its strategy of investing its incremental profits for longer-term growth.”

That said, on the back of a successful 618 promotion, CMR revenue is expected to exhibit a 15% year-over-year uptick. Other than CMR, Leung says a key segment to watch is New Retail, where investments have been made to “counter keen competition.” Ex-SunArt, revenue in the segment is anticipated to increase by 26% from the same period last year.

All in all, ahead of the print, Leung rates BABA shares a Buy along with a $281 price target. Investors could be sitting on gains of ~31%, should Leung's forecast play out over the coming months. (To watch Leung’s track record, click here)

Turning now to the rest of the Street, where most remain in the ecommerce giant’s corner. Barring 2 Holds, the 22 other recent reviews say Buy, all coalescing to a Strong Buy consensus rating. The average price target is a bullish one; at $290.82, the figure suggests upside of 26% over the coming months. (See Alibaba stock analysis on TipRanks) 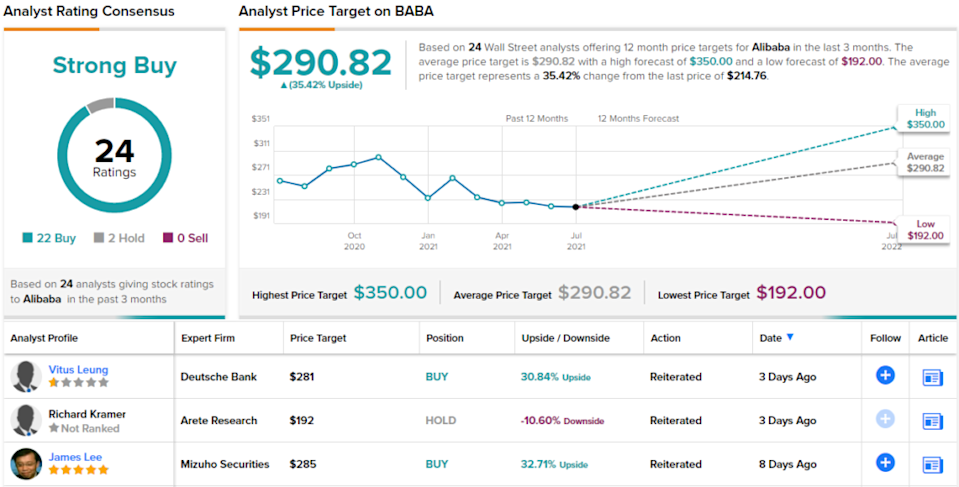