Buy These 3 Stocks Before They Jump Around 40%, Says JPMorgan

Markets have been heading up, with year-to-date gains in the S&P and NASDAQ at 18% and 15% respectively. So far, the upward trend is showing signs of staying power, and JPMorgan global market strategist, Jordan Jackson, sees a strong foundation in the offing for further growth.

Earnings, in Jackson’s view, will be the key driver going forward in this second half: “What’s going to drive the market higher? I think going forward it is going to be earnings… Earnings are certainly expected to surprise to the upside, and that may be the catalyst for markets to continue to grind higher.”

Jackson does note several other points that will tend to support a strong market, citing lower recent volatility and falling Treasury bond yield rates particularly, but in his view, this earnings season, with its high potential for beating the expectations, will be the main factor in Q3 and onward.

In fact, Jackson believes that growth will be above trend in 2H, especially as economic activity continues to ramp. “As consumers get back to more normal, as consumption patterns resume their pre-COVID pace, I think we’re still looking at a broad-trend growth,” Jackson noted.

Given Jackson's outlook, we wanted to check out three stocks scoring major praise from JPMorgan. Not only have they been given a Buy rating, but the firm’s analysts also see at least 40% upside potential on tap for each. Let's take a closer look.

We’ll start in the world of digital outsourcing, a niche that takes advantage of the internet to streamline efficiency – by allowing companies to contract out many of their day-to-day housekeeping tasks to focus on core missions. For TaskUs, that back office work is the core mission. This company got its start in 2008, and now employs over 27,0000 digital workers worldwide and brings in well over $450 million in annual revenue, providing a range of services for client companies in social media, e-commerce, hi tech, fintech, gaming – even ridesharing and food delivery. TaskUs currently serves more than 90 companies, including over a dozen ‘unicorn’ startups.

Having been in business for over a decade, TaskUs is no startup – but it did just recently held its initial public offering. The IPO saw the stock open on the NASDAQ on June 11, with initial pricing at $23 per share. The company put 13.2 million shares on the markets, and raised over $300 million in gross proceeds.

“TASK checks several boxes that we consider as essential to grow at a sustainable high clip: 1) fast growing and large TAM, 2) competitive differentiation, 3) marquee client list, 4) strong culture, and 5) agile delivery. We believe the company’s industry positioning and customer centricity should drive 25% revenue growth beyond this year, making it easily the highest grower in our IT services/BPO coverage,” Jain opined.

To this end, Jain rates TASK an Overweight (i.e. Buy) along with a $45 price target. Hitting Jain’s target could yield returns of ~43% over the next year. (To watch Jain’s track record, click here)

This newly public stock has attracted no fewer than 9 analyst reviews in its short time on the public markets. Those reviews break down 8 to 1 in favor of the Buy over Hold, giving TASK a Strong Buy consensus rating. The shares are priced at $31.51, and the average price target of $43 suggests ~36% upside potential for the coming year. (See TASK stock analysis on TipRanks) 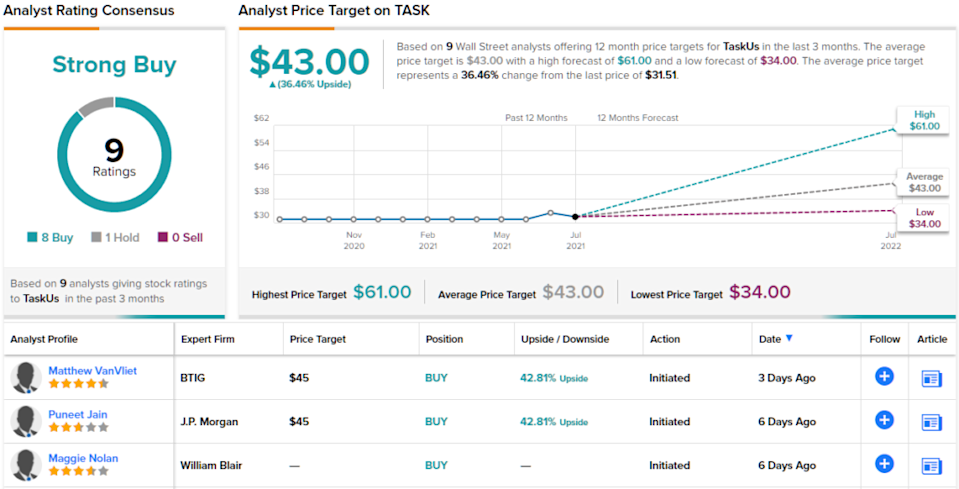 The corona crisis was tough on Arcos, as it was on the restaurant industry generally. The company saw deep losses in 2Q20, and did not return to profitability until 4Q20. The most recent quarterly report, however, for Q1 of 2021, showed another net EPS loss, of 14 cents. Despite the setback, the Q1 EPS loss was not as deep as the year-ago loss of 25 cents per share.

JPM’s Ulises Argote covers Arcos, and he takes a sanguine view of the company’s prospects.

“We remain optimistic on operating recovery across regions for Arcos, with overall results being close to 2019 baseline levels by YE21E. If these positive trends continue to materialize for the company, we believe they should lead to strong upward estimate revisions by consensus," Argote noted.

The analyst added, "Arcos has been gaining market share in core-Brazil, driven by a higher exposure to free-standing stores and likely market consolidation (with the exit of smaller players) while also benefiting from the well-executed digital initiatives … We believe this positive trend should be sustained in coming quarters and expect it to be a positive driver for the stock.”

In line with his bullish stance, Argote rates ACRO an Overweight (i.e. Buy), and his $8.5 price target implies room for ~45% upside potential in the next 12 months. (To watch Argote’s track record, click here)

Overall, ARCO shares have managed to slip under the radar so far, and have only garnered 2 recent reviews; Buy and Hold. The shares are priced at $5.85, with a $7.05 average price target that indicates room for ~20% growth. (See ARCO stock analysis on TipRanks)

For the last stock, we’ll stay in Latin America. Adecoagro is one of that continent’s major agricultural producers, with large-scale farming operations in Brazil, Uruguay, and Argentina. The company’s operations include rice cultivation, dairy farming, and various staple crops, as well as sugar, sugarcane, and ethanol. Adecoagro is one of South America’s largest rice producers.

In the calendar year 2020, AGRO saw US$822 million in total revenues, based on some impressive production numbers: 485,000 hectares of area under management, 145 million liters of milk, and 11.4 million tons of crushed sugarcane.

The company’s highest revenue quarters of the year are Q3 and Q4, so the Q1 sequential declines reported in May were not surprising. Year-over-year, however, revenues were down 30% to US$108 million. EPS remained positive, however, and at 16 cents per share was dramatically better than the 47-cent EPS loss posted in the year-ago quarter. Over the past 12 months, AGRO shares have more than doubled in price, gaining 117% over the course of the year.

In his coverage of this stock, JPMorgan's Lucas Ferreira praises Adecoagro’s ‘good execution.’ The analyst rates the stock an Overweight (i.e. Buy) along with a bullish price target of $14. Investors could be sitting on gains of 47%, should Ferreira’s forecast play out over the coming months. (To watch Ferreria’s track record, click here)

“Our optimism goes beyond strong commodity prices: (1) cane crushing was more concentrated in the inter-harvest period and the commercial strategy led to 5% higher ethanol sales, 2% lower cane cost of production. (2) Focus on quality and productivity explain part of the 30-40% gains in rice and dairy EBITDA and we think these are mostly sustainable,” Ferreira wrote.

Some stocks slip under the radar, picking up few analyst reviews despite sound performance, and this is one. Ferreira’s is the only recent analyst review on record here. (See AGRO stock analysis on TipRanks)