Buy These 3 New Stocks Before They Jump Over 40%, Says Goldman Sachs

The IPO activity this year continues a heavy momentum built up last year – when despite the corona crisis and the economic dislocations, the market saw record breaking IPO activity, with 407 new public offerings. It’s an example of the stock market’s dynamism, and the confidence of both company managers and investors that stocks are the place to find returns.

This brings us to Goldman Sachs. The banking firm’s stock analysts have been looking for the equities primed to gain in current conditions. And just this week, they’ve tapped three stocks new to the public markets as likely to jump 40% or more in coming months – a solid return that investors should note. We ran the two through TipRanks database to see what other Wall Street’s analysts have to say about them.

We’ll start with Paymentus Holdings, a cloud-computing service in the online bill payment niche. The company offers a platform that is widely used in North America – boasting tens of millions of customers, more than 1,300 business clients on the billing end, and nearly 200 million payment transactions last year.

Paymentus provides payment services for billers across a wide range of industries, including utilities, insurance, telecom, healthcare, and government. The company’s IPN, or instant payment network, links the platform to business partners, and allows consumers to handle their bills through a greater range of options: Amazon’s Alex; the PayPal app, in person at Walmart, or even through online banking.

With the growing share of online billing in the world of commerce, Paymentus had to consider upping its profile – and an IPO was a natural move. IPOs by their nature both increase a company’s public visibility and bring in new capital for expansion. Paymentus priced its initial offering at $21 per share, put 10 million shares on the market, and gave the underwriters an option on an additional 1.5 million shares. In the actual event, on May 26, the company sold the offered shares – and easily raised the initially estimated $210 million.

Among the bulls is Goldman Sachs analyst Matthew O’Neill, who is impressed by Paymentus’ application of modern cloud software organization to the complex business of consumer bill-paying.

“Paymentus believes that it has a best-in-class product and can take share from legacy software and processes for billers. Paymentus currently has penetrated less than 1% of the $4.6tn U.S. Bill Payment TAM. We expect Paymentus to gain further share in this market through its tech stack, particularly with its Paypal/Venmo integration and other attractive features for its clients," O’Neill noted.

The analyst added, “Paymentus currently operates across non-discretionary verticals, but there is an opportunity for it to expand into new channels and verticals where there are consistent recurring payments for essential services. The company believes that its modern configurable tech solutions allow it to cost-effectively expand its offerings.”

In line with these comments, O’Neill rates PAY a Buy along with a $54 price target, suggesting ~64% upside potential for the year ahead. (To watch O’Neill’s track record, click here)

Overall, PAY has received 8 recent analyst reviews, breaking down to 6 Buys versus 2 Holds and making the analyst consensus rating a Strong Buy. The stock has current trading price of $32.35 and an average price target of $31.22, indicating ~14% upside potential for the next 12 months. (See PAY stock analysis on TipRanks) 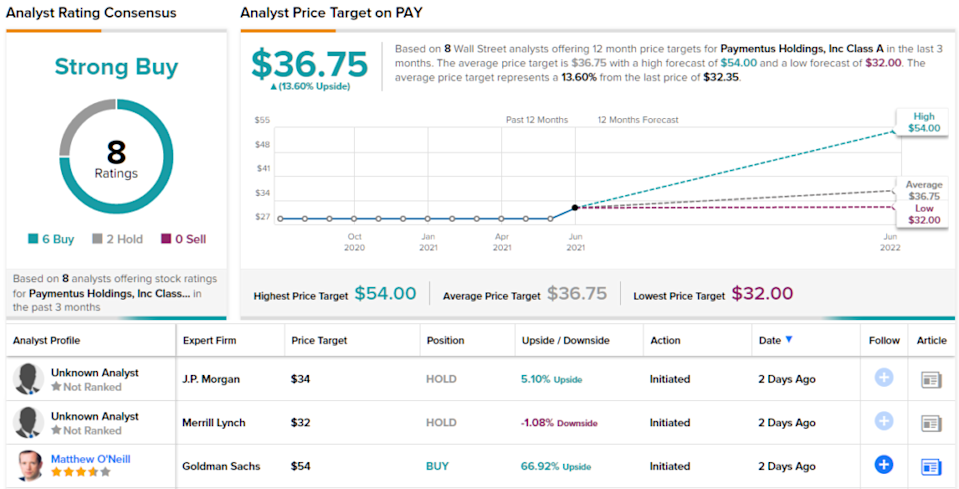 Let’s stick with online payments. Flywire got its start as an online payment service specializing in the educational industry, but it has since branched out to the healthcare and travel sectors, as well. The company’s payment platform offers secure processing for customers around the world, offering both improved collections and localized payment options. The Boston-based company operates on a truly global scale, with over 2,250 client businesses who operate in 240 countries and 130 different currencies.

Flywire moved into the public arena on May 26, in an IPO that saw 10.44 million shares go on the market. The underwriters of the offering had an option on an additional 1.566 million shares. The new stock started trading on the NASDAQ, and the company’s initial pricing put it at $24 per share. The share sale brought in over $366 million on the first day, well above the $250 million the company was aiming for.

"We see opportunity for Flywire to expand within its existing education and healthcare verticals, which have large TAMs. Currently, Flywire has penetrated less than 15% of the cross-border tuition market, and with the addition of domestic payments processing, we believe there is ample runway in education. Flywire is also active in healthcare and travel, with additional opportunity in B2B payments," O’Neill opined.

The analyst added, "We expect Flywire to continue to grow within its verticals due to its software-driven strategy, which strengthens its competitive moat in cross-border payments by delivering convenience and ease of use to clients and their customers."

This company, while new to the public markets, has already made its mark with Wall Street’s analysts – they’ve given FLYW shares a unanimous Strong Buy consensus, based on 9 positive reviews set since the IPO. The shares are priced at $35.52 and the $42.63 average price target indicates room for ~20% share price growth this year. (See FLYW stock analysis on TipRanks) 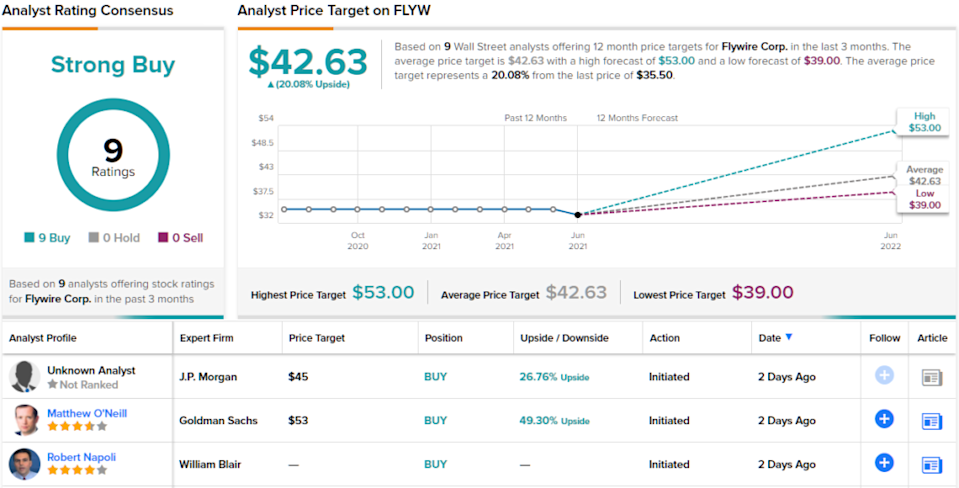 Last but not least is Singular Genomics, a life sciences company working on next generation sequencing (NGS) and multiomics technologies, the tools that will build the next wave of genetically-based products and medicines. The company has a proprietary sequencing platform, and brings to the table an integrated solution in calls PX. The PX integrated solution makes use of genomics, cell analysis, spatial analysis, and proteomics on an integrated instrument.

The PX Integrated Solution is one of Singular Genomics’ pipeline products, and is scheduled for commercial release in 2023. The company is also working on the G4 Instrument, a benchtop next gen sequencer optimized for fast and accurate results in genetic sequencing tests. The G4 Instrument is packaged with a menu of consumable kits. The project is on track for early access and a commercial launch by the end of this year, with the first units shipping to customers in 1H21.

Singular Genomics held its IPO to raise capital – and it did so successfully. The initial pricing was $22 per share for 10.2 million shares put on the market. As is usually done, the underwriters had an option on additional shares, 1.53 million in this case, at the same price. Singular Genomics is expected to generate pre-expense funds of $224.4 million. They beat that number. The IPO officially brought in $258.1 million, before deductions. The stock shares started on the market on May 27, and the IPO closed on June 1.

Analyst Matthew Sykes, in his report on this stock for Goldman Sachs, points out several factors that indicate strong growth ahead:

“1) Differentiated technology: The OMIC Sequencing Engine incorporates a number of innovations providing a competitive advantage to the incumbent instruments. We see the primary differentiation in the sequencing chemistry OMIC has developed resulting in better performance across a number of metrics relative to the current competition.

“2) Better performance: In internal and external testing environments the G4 has shown to have a performance advantage in cycle time and data output as compared to the incumbent technologies…

“3) Attractive market opportunity: The global NGS market is estimated to grow at a 19% CAGR reaching $18.6bn by 2026… We believe OMIC has a significant opportunity to address the need for an alternate supplier and for additional sequencing capacity in the market.”

Based on the above, Sykes gives OMIC shares a Buy rating to start out with, while his $35 one-year price target implies ~49% upside from current levels. (To watch Sykes’ track record, click here)

Overall, OMIC has picked up 4 reviews in its short time on the market, and they break down 3 to 1 in favor of Buy versus Hold – for a Strong Buy consensus rating. The shares are priced at $23.16 and the average price target of $30.33 implies an upside of ~29% for the coming 12 months. (See OMIC stock analysis on TipRanks) 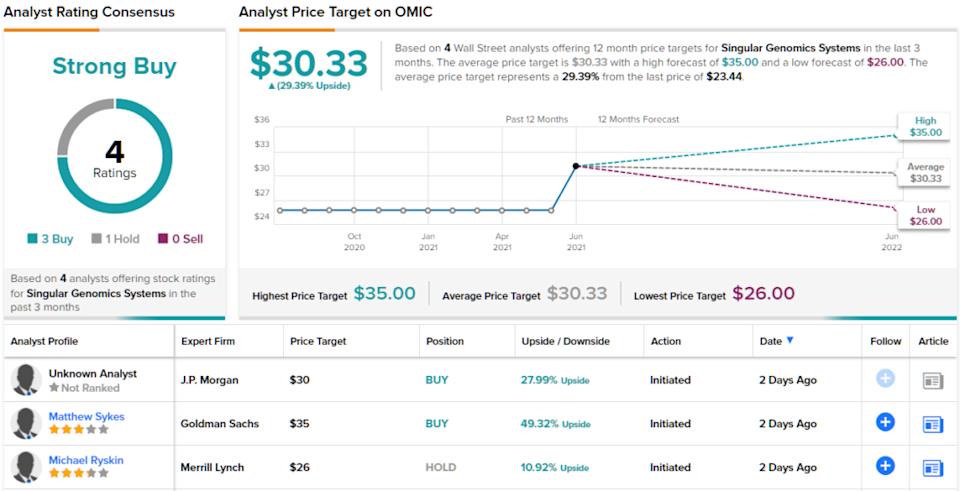