Amazon (NASDAQ:AMZN) stock has spent the first half of 2021 in a trading range. 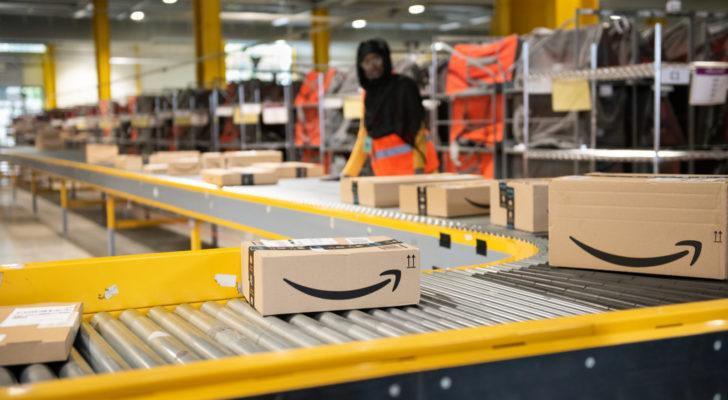 Logistics activity on the Amazon site of Vélizy-Villacoublay in France. Packages are sorted by workers on coneyors.

Shares have traded below $3,000 but have also traded above $3,500. Shares are currently at the high end of the range, at more than $3,400. But two previous moves, in February and April, stalled. Will this time be different?

There are good reasons for the stall. Growth gets harder as you get bigger, as Walmart (NYSE:WMT) has learned. Multiples are slowly compressing as re-opening plays give investors more things to buy. Elvis is leaving the building (on a rocket ship). Ground control to Major Jeff indeed.

I have held fast to my shares, even though they’re now a significant piece of my retirement account. It’s fair for you to ask why.

Incoming CEO Andy Jassy has two big options for breaking out of the trading range.

First, he could institute a dividend or stock split of AMZN stock. The dividend wouldn’t yield much, and the split wouldn’t do much. But they would signal that Amazon is serious about rewarding shareholders. My guess is it could send the stock to $4,000, or $400 per share, if he splits it 10:1.

Second, Jassy could break up the company. Amazon Web Services no longer needs the store’s cash flow to maintain its capital budget. The store is where the problems are, with the government, unions, and burnout all taking a toll. Turnover is high.

Amazon built a huge logistics operation for the store and that unit needs help. A $15 hourly minimum wage won’t solve the problems. Many of Amazon’s most put-upon workers are employed by third parties, delivery service partners who drive Amazon trucks but don’t work for Amazon.

There are supply-side problems with Chinese factories looking to get around it through venture capital. Amazon sellers are being rolled up into larger firms that pile on the pressure.

Amazon sees its huge workforce as fungible because it sees most as temporary. It’s why Amazon is the most disruptive disrupter in the world.

The company has long invested in robotics, both for the warehouses and deliveries. Some in Congress want to make it sell the logistics operation, but that could also slow its automation drive. It even has a self-driving taxi called Zoox.

An enforced breakup may face long odds, but a Jassy-directed breakup could be big for shareholders.

Splitting the store and logistics units from the cloud and media unit would let Jassy focus on technology problems, like bogus product reviews. It would let the store bring in experts to deal with the trashing of unsold products and give more focus to the build-out of its ad business. It might force a direct charge for Amazon Prime video, but the Fire stick is now a gatekeeper for every streamer. Amazon revenue would likely increase.

The Bottom Line on AMZN Stock

Jassy isn’t Jeff Bezos. Bezos has made his legacy. Jassy has yet to make his.

If Jassy has a legacy right now it’s as the head of AWS, not the store. If he wants to protect that legacy, a breakup on Amazon’s terms could both unlock shareholder value and get the government off its back.

What bears see as peril I see as opportunity for AMZN stock. The next few years are going to be very, very interesting in Seattle.

On the date of publication, Dana Blankenhorn held LONG positions in AMZN, MSFT, FB and AAPL. The opinions expressed in this article are those of the writer, subject to the InvestorPlace.com Publishing Guidelines.