Bond yields went for a ride on Wednesday and Thursday after the Federal Reserve signaled the likelihood of rate hikes by the end of 2023.

The Federal Open Market Committee on Wednesday released a fresh round of “dot plots,” which map out expectations for where interest rates could be headed over coming years. The chart showed 13 of 18 policymakers projecting at least one rate hike by the end of 2023.

In the immediate aftermath of the forecasts, yields on the U.S. 10-year Treasury (^TNX) rose as much as 10 basis points to 1.59%. But as Federal Reserve Chairman Jerome Powell told reporters that the forecasts are highly uncertain and should be taken with a “big grain of salt,” yields began slipping back down. 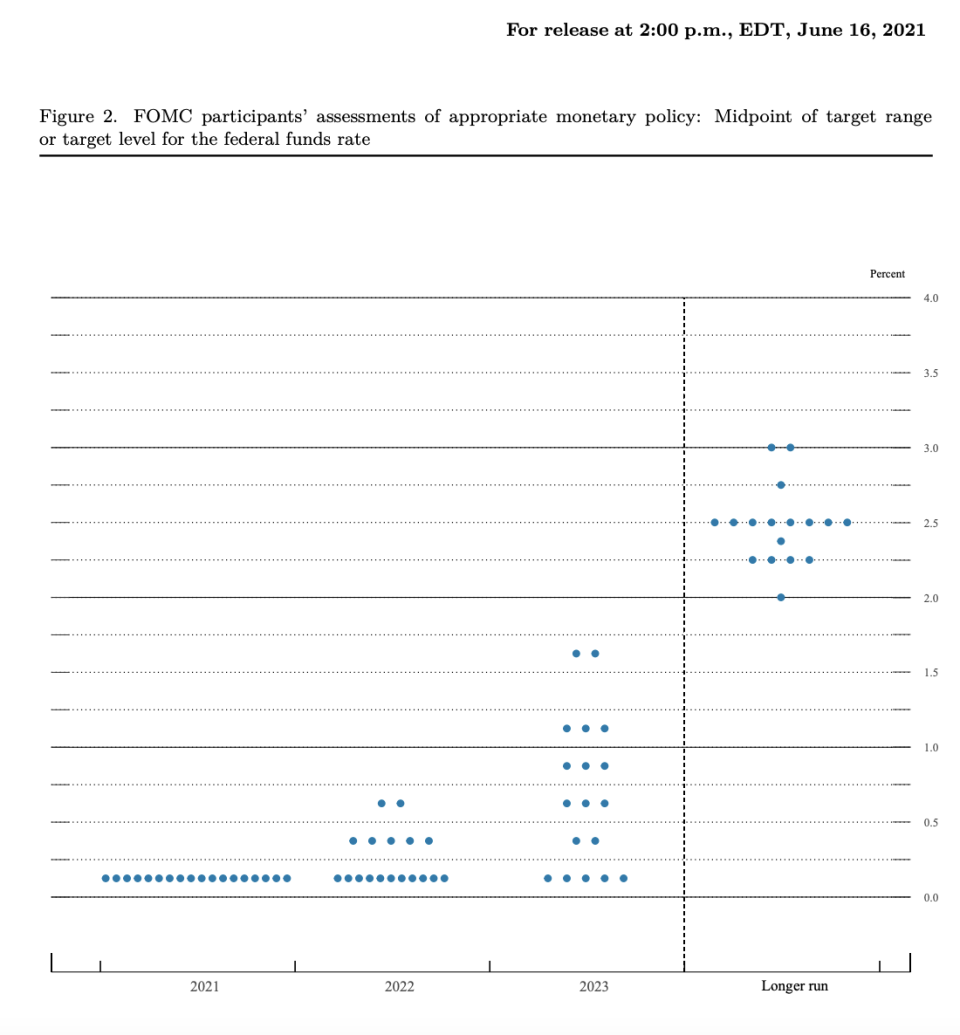 The Fed’s June 2021 Summary of Economic Projections show the median member of the central bank’s policy-setting committee seeing the case for two rate hikes by the end of 2023. Source: Federal Reserve

But on Thursday, yields continued to undo Wednesday’s spike, with the 10-year tumbling to as low as 1.47%.

Although investors may still be digesting the Fed’s policy stance, the reversal of higher bond yields on Thursday suggests that the central bank — for now — has been able to avoid a 2013-like episode where the surprise of taper talks sent bond yields ripping higher.

“The 10-year rate has actually come down over the last few weeks rather than going up," former Fed Governor Randall Kroszner told Yahoo Finance Thursday. "So, that suggests the Fed is credible, the Fed is being believed when they say this is transitory, and they will act when they need to."

Is it priced in?

On one hand, expectations for earlier rate hikes could push bond yields higher, since bond yields tend to act as proxies for interest rates.

Tim Johnson, BNP Paribas Asset Management head of global multi-sector fixed income, told Yahoo Finance Thursday that he expects the 10-year bond yield to rise to about 2% by the end of the year.

"What I think is happening now is the market is really digesting this transition, this change," Johnson said.

But Ellen Gaske and Robert Tipp of PGIM Fixed Income said that bond yields may peak around mid-year, if they haven’t already.

“The sell-off in Treasury yields since March 2020 has already left a substantial buffer—a ‘pricing in’—of Fed rate hikes, giving us reason to believe that any further sell-off in Treasuries should be limited,” Gaske and Tipp wrote Thursday.

Lower bond yields imply lower risk appetite, as the prospects of the Fed pulling away its support push investors away from riskier asset classes like stocks and into lower-yielding assets like government debt.

The movement on Thursday specifically could be the result of “steepener” bets going bust.

Those betting on higher rates may have expected the Fed to be too late in responding to runaway inflation, leading to a dramatic ratcheting up of rates. A “steepener” could attempt to cash in on that expectation by taking a long position on medium-dated bonds (i.e. five-year) alongside short positions on longer-dated bonds (i.e. 30-year).

But with the Fed showing markets that it is ready to raise rates to get ahead of any inflationary pressures, an unwinding of those bets may have accelerated momentum in buying up longer-dated bonds to reverse those trades.