It's time to back up the truck and buy the beat-up shares of pioneering crypto exchange Coinbase (COIN), contends Oppenheimer analyst Owen Lau.

Coinbase shares don't deserve to be swept up into the latest crypto winter, according to Lau.

"We think Coinbase should not trade in lockstep with bitcoin because bitcoin can be very volatile, but at the same time because of their volatility it drives higher trading volume. It is similar to all the traditional exchanges, and we think that it's still a misunderstanding in the market that people think Coinbase should trade along with bitcoin going forward," Lau said on Yahoo Finance Live moments after releasing a bullish research note on the company.

Lau reiterated his Outperform rating on Coinbase along with a 12-18 month price target of $440. In effect, Lau is looking for Coinbase shares to nearly double within an 18 month timespan.

That being said, Coinbase shares have been swept up into the downdraft in crypto prices going on for months already.

From the record highs of more than $63,000 in mid-April, bitcoin (BTC-USD) has shed about 50% (including a trip below the $30,000 level). Major sell-offs have spread to other top cryptos such as dogecoin and ethereum amid fears of regulator crackdowns in the U.S. and China.

Coinbase shares are down about 30% over the past three months. At $234.88, Coinbase shares trade well below the $328.88 level set on its Nasdaq debut in mid-April. 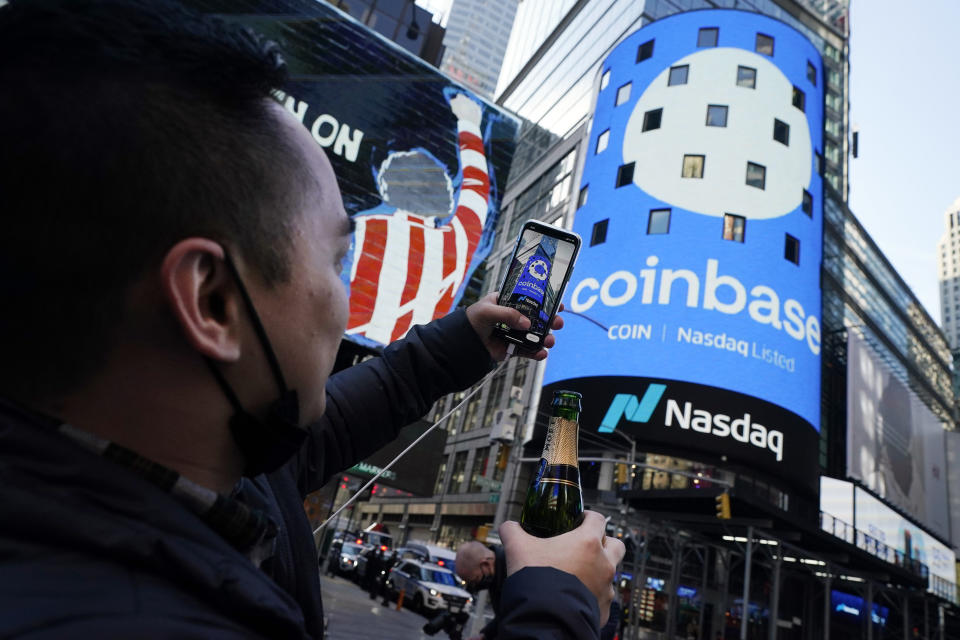 The pullback comes despite Coinbase CFO Alesia Haas reiterating in an interview on Yahoo Finance Live that the second quarter started off strong.

Said Lau in his note, "Looking ahead, we believe management will continue to strategically increase contributions from 1) recurring revenue (e.g., the Coinbase Earn campaign, staking, and M&A) and 2) altcoins. Coinbase indicated ~40% of its trading volume in 1Q came from altcoins, materially lower than peers (e.g., ~85% of spread revenue for Voyager). After adding Dogecoin, Polkadot, and others, Coinbase should gradually reduce its reliance on Bitcoin. We continue to see a sharp dislocation between Coinbase's fundamentals and its valuation and believe the current price offers an attractive entry point for long-term investors."