"Bitcoin is now considered an investable asset. It has its own idiosyncratic risk, partly because it’s still relatively new and going through an adoption phase," said Mathew McDermott, Goldman Sachs' global head of digital assets, in a new piece of research. "And it doesn’t behave as one would intuitively expect relative to other assets given the analogy to digital gold; to date, it’s tended to be more aligned with risk-on assets. But clients and beyond are largely treating it as a new asset class, which is notable—it’s not often that we get to witness the emergence of a new asset class."

Despite Goldman's rubber stamp of approval on bitcoin (BTC-USD) and other cryptocurrencies have traded anything like a typical stock of a credible company or bond in May. In truth, if bitcoin is to be considered a new asset class it has a lot in common with one area in the stock market: often very volatile penny stocks that see wild gyrations on the tiniest bit of news. 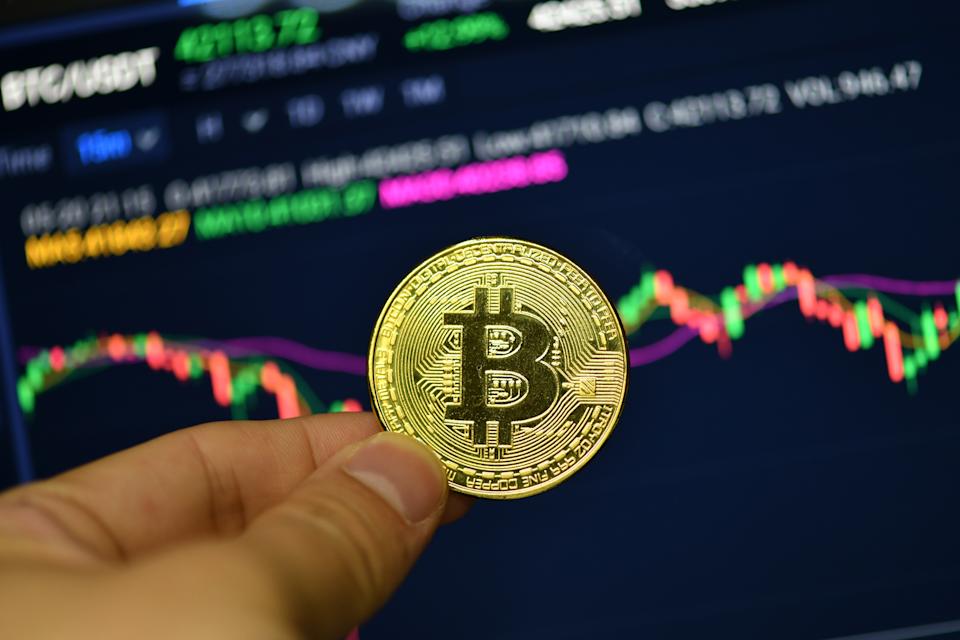 CHINA – 2021/05/20: In this photo illustration a Bitcoin is seen on display with a Bitcoin price trend chart in the background. (Photo Illustration by Sheldon Cooper/SOPA Images/LightRocket via Getty Images)

Bitcoin prices continued to be under massive pressure on Sunday, plunging more than 15% by afternoon trading. At $32,652, bitcoin prices have crashed about 50% from their mid-April peak of $64,829. Ether nosedived another 18% on Sunday, bringing it's drop from an all-time high this month to roughly 60%. Early Monday morning, crypto recovered slightly.

The serious price correction in cryptos come amid a groundswell of negative news mostly from government officials worldwide.

Authorities in China said last Friday that it would be necessary to crack down on bitcoin mining and trading behavior to limit investment risks.

Meanwhile, Federal Reserve Chairman Jerome Powell said in a presentation last week the governing body would continue its work on a digital dollar. Any digital dollar would likely weigh on the bullish sentiment for bitcoin and other cryptos.

“The effective functioning of our economy requires that people have faith and confidence not only in the dollar, but also in the payment networks, banks, and other payment service providers that allow money to flow on a daily basis,” Powell said. “Our focus is on ensuring a safe and efficient payment system that provides broad benefits to American households and businesses while also embracing innovation.”

"A key concern is inconsistent regulatory actions around the globe that impede the further development of the crypto space, or the ability of more regulated entities to engage within it. It feels like the regulatory tone has turned more constructive, but I certainly wouldn’t want to be complacent," McDermott said.

Even in the face of such risk, McDermott said institutional clients remain keen on adding some form of crypto exposure to portfolios.

"As a whole, discussions with institutional clients revolve around how they can learn more on the topic and get access to the space—as opposed to questions around what bitcoin or cryptocurrencies are—which was really the main topic just a few years ago. But beyond that, asset managers and macro funds are interested in whether or not crypto fits into their portfolios, and if it does, how to get access to either the physical—by trading the spot instrument on a blockchain— or exposure through other types of products, typically futures," McDermott explained. "Hedge funds, perhaps unsurprisingly, are more active in this space, and are particularly interested in profiting from the structural liquidity play inherent in the market—earning the basis between going long either the physical or an instrument that provides access on a spot basis to the underlying asset and shorting the future."