At the time of writing this report, the pioneer Crypto traded near $35k with a daily trading volume of $34 billion. Bitcoin is up 4.47% for the day.

Macros helping the most popular crypto include reports that El Salvador, is expected to make Bitcoin its legal tender within the Central Latin country on September 7.

El Salvador’s Crypto law is expected to enable merchants to accept Bitcoin alongside the U.S. dollar as its legal tender.

In addition, Bitcoin bulls will keep tab on the monthly chart pattern which opened in June at around $36,900 price levels.

A close on the 30th of June above or close the opening price for this month would bring to effect a long-tailed candle, that could boost more buying pressures on the bias it further indicates the Crypto market has tried and failed to hold lower price levels.

Recent comments from Sam Bankman-Fried, the helmsman at FTX exchange on institutional inflows suggest that the flagship crypto asset in the mid-term is unlikely to break above $50,000, has he buttressed it could take months or even years.

“You know, these are a lot of slow-moving, careful institutions that are making decade-long decisions about what they are going to do with their businesses,” he added.

It’s critical to understand that the pioneer Crypto active addresses have plunged by 24% from the generally sustained peak of 1.16 million from March to early May. The present activity of 884,000 addresses was last seen this time in 2020.

Data collated from Glassnode a top crypto analytic firm revealed during the May Sell-off and the past few weeks, between 3.0k and 3.5k BTC in net inflows have been noticed.

Although in both circumstances almost all the inflow size was immersed by buyers in recent weeks. On aggregate, the total Bitcoin holdings on Over-the-counter desks remained relatively flat since April. 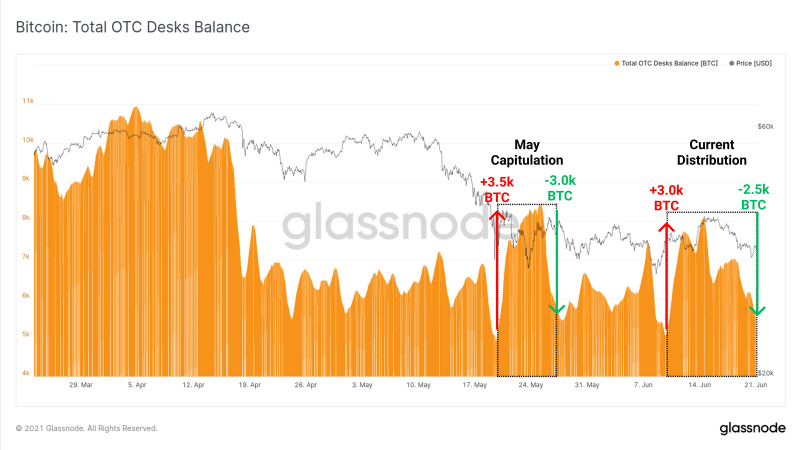