Billionaire on Biden tax proposals: I don’t worry about what ‘I can’t control’

President Joe Biden's proposed corporate tax hike has emerged as a key obstacle to bipartisan agreement on an infrastructure bill, as Republicans and powerful business trade groups remain opposed to the tax increase.

Pushback against Biden's overall tax plan — which also includes a tax increase for wealthy individuals — has come from some prominent billionaires and chief executives. JPMorgan Chase (JPM) CEO Jamie Dimon warned lawmakers on Capitol Hill last week that the increased taxes "would be detrimental to a lot of companies."

But other ultra-wealthy Americans have supported the Biden administration's tax proposals or opted to sit out the debate altogether. In a new interview, billionaire Todd Boehly — co-founder and CEO of holding company Eldridge — did not take a position on the tax hikes, saying he doesn't worry about things he "can't control."

Still, he praised Biden for "doing a good job" managing the federal government in a period of change as the U.S. recovers from the pandemic.

"You're on a ride. And as a human, I don't get too worked up about it because I'm more focused on what I can control," he adds. "I'm not going to get bent around an axle on something. I can't control it. I think it's worthless. And it makes me frustrated. So why would I want to do that to myself?"

Biden has called on corporate America to pay its "fair share," referring to the tax hike embedded in his initial $2 trillion infrastructure proposal that would raise the rate for corporations from 21% to 28%. Prior to a tax overhaul passed during the Trump administration, the corporate tax rate was 35%.

Last month, Biden said he was willing to compromise with Republicans on the infrastructure bill but would not budge on the corporate tax hike.

In addition, Biden has proposed tax hikes on the wealthy that would pay for his $1.8 trillion American Families Plan, which includes universal pre-school, two years of free community college, and a host of other initiatives. The plan would increase the top individual income tax rate to 39.6% from 37%, tax capital gains as normal income for households making more than $1 million, and close the carried interest loophole. 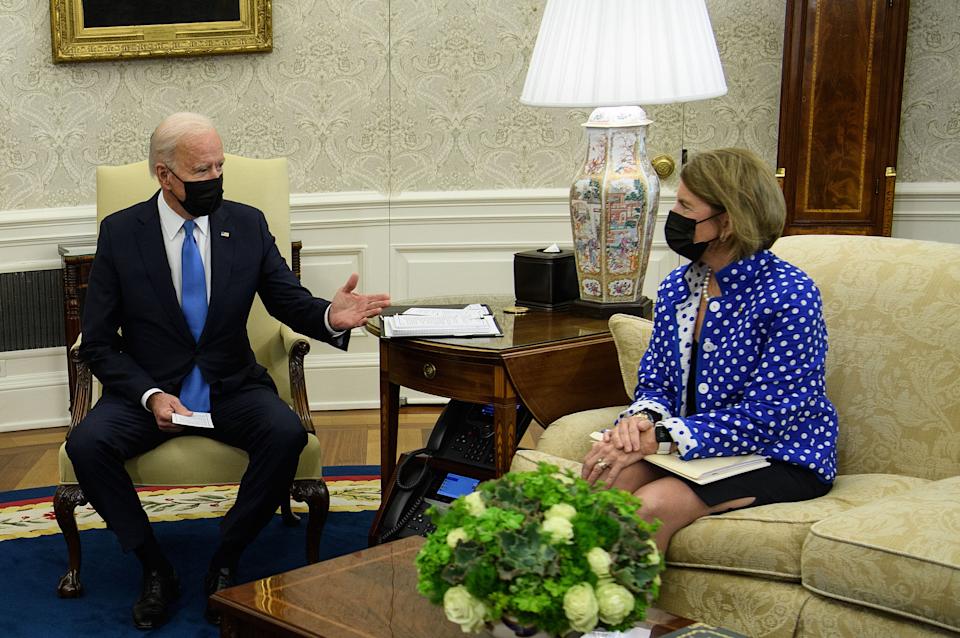 President Joe Biden meets with Republican Senator from West Virginia Shelley Moore Capito and others in the Oval Office at the White House in Washington, DC, on May 13, 2021. (Photo by Nicholas Kamm / AFP) (Photo by NICHOLAS KAMM/AFP via Getty Images)

The proposed tax increases for wealthy people and corporations have garnered majority support in polls conducted by Morning Consult and Politico over recent months. But the hikes have also faced criticism from Republican leaders, some high-ranking members of Biden's own party, and the business community.

To be sure, some prominent wealthy people have supported the tax hikes. Tom Steyer, a billionaire former hedge fund manager and presidential candidate in the Democratic primary, praised Biden's tax proposals in an interview with Yahoo Finance Live in January. Former Trump chief economic adviser and Goldman Sachs COO Gary Cohn also told Yahoo Finance in October that he would back a 28% corporate tax rate.

Commerce Secretary Gina Raimondo told Yahoo Finance last month that she speaks with "dozens and dozens of CEOs" who have told her they thought the current 21% corporate tax rate was "too low." Many would support a tax hike "if the money were to be used for investments that improve our competitiveness," Raimondo added.

Speaking to Yahoo Finance, Boehly praised Biden for his handling of the challenge posed by overseeing the federal government in a period of "evolution changing so dramatically" as the country and the economy recover from the COVID-19 pandemic.

"How many things can go wrong in my own businesses every day with thousands of people? And then you think about managing a country? I don't think it's a small feat."