Tracking the moves of hedge funds can help investors build their own investing strategies, as these institutional investors are known to conduct thorough research before placing any trades.

One investment firm of renown is Citadel, which is led by founder, CEO, and Co-Chief Investment Officer Ken Griffin.

Here’s a blast from the past: back in 1987, Griffin was a 19-year-old sophomore at Harvard University. At that time, he started trading from his dormitory room with a telephone (obviously not a smartphone), a fax machine, and a personal computer. That was the state-of-the-art technology of the time, if you can believe it.

Fast forward a few years to 1990, and that’s when Griffin founded Citadel. He has served as the firm’s CEO ever since.

Today, Citadel manages more than $38 billion in capital. Griffin is revered as an investor, but also as a philanthropist: in 2014, he donated $150 million to Harvard University to support need-based financial aid, and this was the largest gift in the school’s history at the time.

According to the recent 13F filing, Griffin’s firm purchased 197,751 shares of Amazon (AMZN) in Q1 2021, increasing its holding by 2,407%. Now, at first glance, that might not sound like a lot of shares for a hedge fund, but the price puts this purchase into perspective. Shares changed hands for around $3,000 during this time period.

With the most recently noted purchase, Citadel’s total holdings in Amazon stock were recorded at 205,965 shares. (See Amazon stock analysis on TipRanks)

There’s an old saying among technical traders: “The longer the base, the higher in space.”

Amazon stock has been “basing” for quite a while. Indeed, it has been going sideways since August of last year. It is possible that Griffin is betting that the “higher in space” theory will play out. Amazon stock has been known to stage major breakouts in the past, so you never know if a huge rally might be right around the corner.

Or perhaps Griffin just wants to wager on the future growth of an e-commerce giant. After all, if you’re going to bet on an online commerce platform, why not make it the biggest one?

Granted, it has been reported that Jeff Bezos plans to step down from his position as Amazon’s CEO during the third quarter. On the other hand, Amazon is such a well-oiled machine that it will probably continue to thrive even without Bezos as the CEO.

On the fiscal front, Amazon gives no cause for worry. During the first quarter of 2021, Amazon recorded a whopping $109 billion in revenues. That figure beat the expectations by 3.7%. Even more impressively, it represented 44% revenue growth on a year-over-year basis.

Turning to the top line, Amazon reported a statutory profit of $15.79 per share. This result was 64% higher than what the analysts had expected.

According to TipRanks’ analyst rating consensus, AMZN is a Strong Buy, based on 31 unanimous Buy ratings. The average analyst price target is $4,298.55, implying 34.2% upside potential. 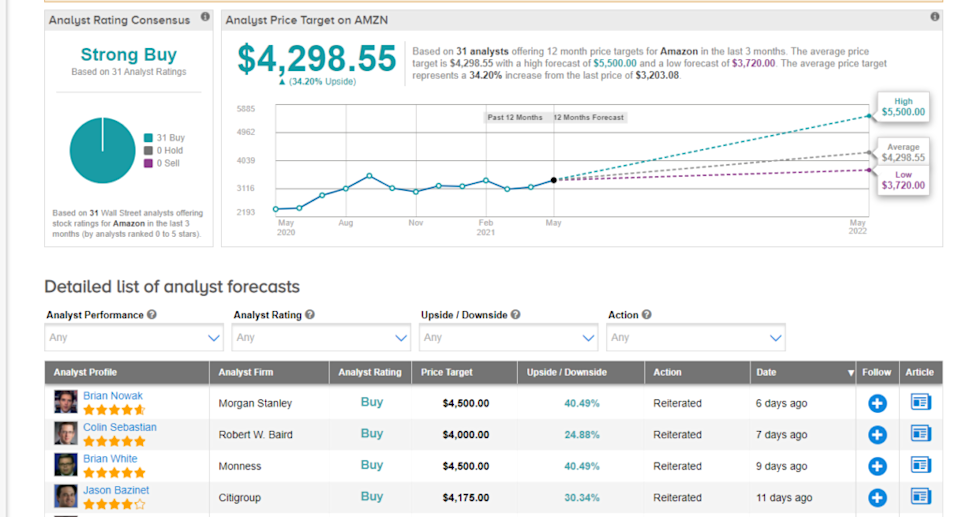 From the outside, it is difficult to discern whether Citadel and Griffin are betting on a technical breakout or relying on continued revenue/profit growth.

Disclosure: David Moadel did not own Amazon shares at the time of publication.