Big banks want communities of color to trust them. But it’s not so simple

Sylvia Adetona has deposited checks at the same financial institution for more than 25 years. That doesn't mean she trusts banks.

Over the decades, the 68-year-old South Los Angeles resident has seen the unequal treatment banks gave communities of color and low-income customers.

In the leadup to the Great Recession, banks issued a disproportionate number of subprime mortgage loans to Black and Latino borrowers. Adetona remembers the for-sale signs dotting her neighborhood — those families lost their homes when they couldn't afford to make their mortgage payments, yet many of the banks were bailed out. Someone she knew had a decent credit score but was still denied a loan. Bank branches shut in her neighborhood, forcing her and others to travel farther when they want to interact with tellers.

"I wouldn't say I have an absolute great relationship with the bank," Adetona said.

Communities of color have many reasons to distrust large national banks. In some cases, the wariness stems from racist practices in the financial system, such as redlining, or from past bank failures. In others, it arose from a lack of transparency about fees or a feeling that national banks want only certain kinds of customers.

How — and whether — big banks can build trust is a major question.

"There has been systemic financial exclusion of certain demographics,” said Charles Danso, an assistant professor of finance at Cal State L.A. To truly serve those communities, banks need to "put some thought into generating financial products that will meet the needs" of these individuals.

After the murder of George Floyd and the subsequent uprisings for racial equity, national banks — like many other large corporate institutions — pledged to help reduce the racial wealth gap by investing in Black and Latino communities.

U.S. Bank said it would offer $116 million in community grants and investments in small businesses and organizations owned and led by Black people, among other programs. JPMorgan Chase said it would invest $30 billion over five years into Black and Latino communities through funding for businesses, home loans and opening "community center" branches in underserved areas that provide additional services aimed at unbanked or underbanked households.

Last month, one of those Chase community center branches opened in Los Angeles' Hyde Park neighborhood. To oversee the branch's new services, the bank selected Jordan King, who lived in South L.A. for several years as a child while his mother, a Jamaican immigrant, was a doctor at Martin Luther King Jr./Drew Medical Center.

"I can’t say that we had really any sort of relationship with bankers and, equally as important, didn’t know any bankers that could identify with my mother’s story and us as a Black family," he said, adding that his family didn't have access to complex banking services that fit his mother's high income level.

The community branch is a renovation of a preexisting Chase bank branch, with space and equipment for community meetings, financial literacy sessions and other gatherings. It also added new staff positions including a community home lending group focused on guiding unqualified borrowers toward their first home purchases and minority business consultants to advise South L.A. business owners.

"We want to give people that access to those bankers, to those experts that we know have been missing in South L.A., at least at this scale, and be that change and be that ecosystem to support the folks that are here now," King said.

The hope is that, with workers embedded in and coming from the area, the bank will be woven into the community. 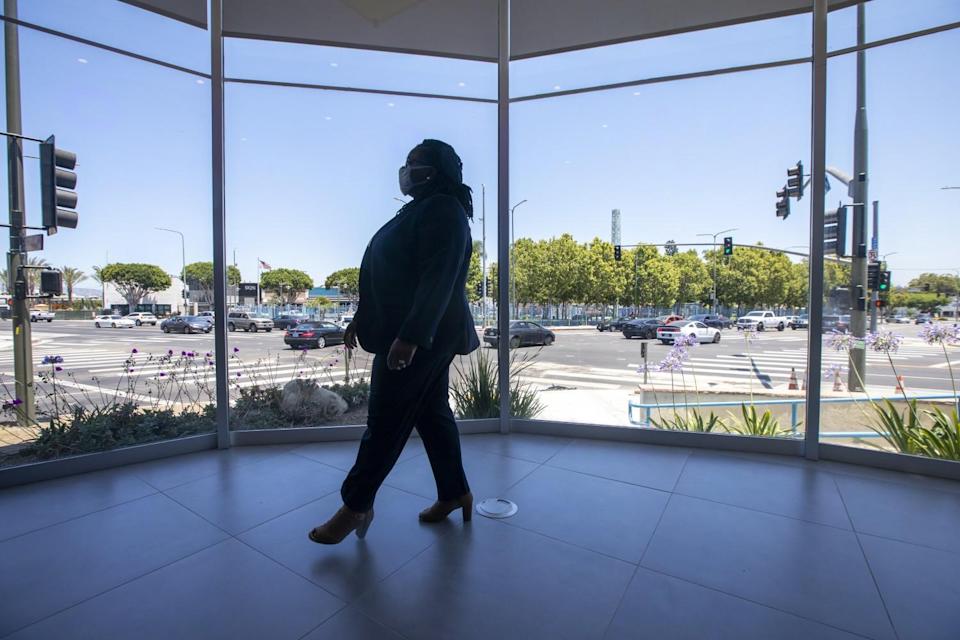 “Trust is predicated on really being aware of what a community needs, really aware of how people are receiving us, how people are experiencing us," said Jonathan Morales, Chase's head of community banking for California. "There's a lot of sentiment out there that people may not necessarily trust banks. This team is really predicated upon listening."

Some community members say just being there is not enough. Around the corner, the Sole Folks retail cooperative provides a place for local artists to show and sell their wares without the high cost of renting their own storefronts. Sole Folks also has an art gallery and art lab where artists can work or hold classes on making such items as ceramics, candles and soap. Co-op vendors and class instructors pay a small percentage back into the co-op and lab.

“It’s really based on group economics and kind of raising each other," said Akil West, Sole Folks' chief executive.

The idea was born out of the pandemic, when foundation and grant funding for the art community in Leimert Park dried up and galleries and studios closed, leaving artists no place to show their art, West said.

"It was hard for these people to keep their studios, have shows and make a living," he said.

West said he sees the organization becoming the "Black think tank" where corporations and other groups will come and speak to the community about what's needed there. The group has also attracted attention from banks and community development financial institutions. 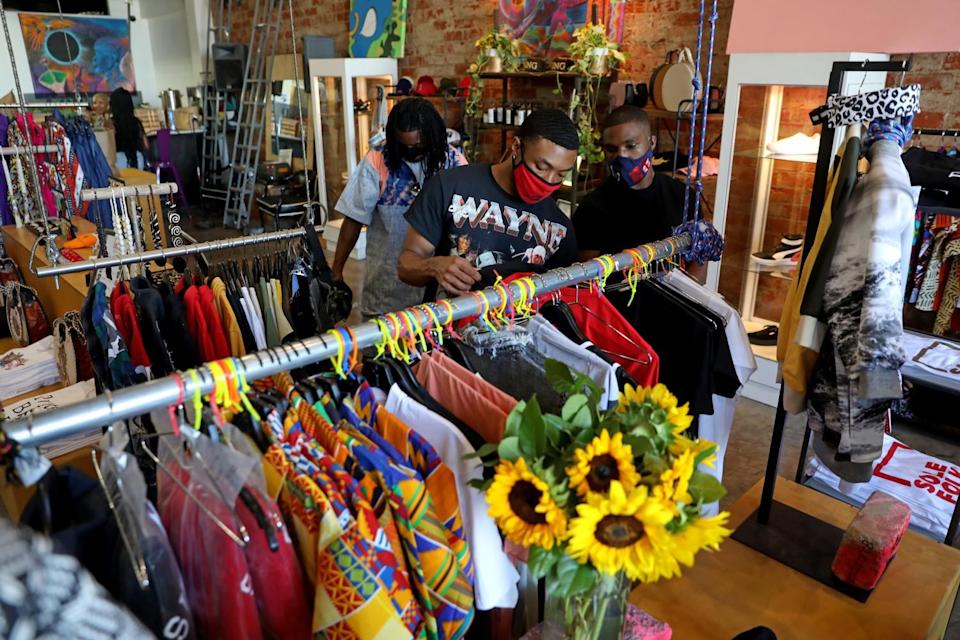 What those services look like — and how they're offered — is another thorny aspect of trust-building.

A Federal Deposit Insurance Corp. survey found that in 2019, 5.4% of U.S. households — about 7.1 million — did not have a checking or savings account at a bank or credit union. Although the rate of unbanked households has trended downward in recent years, it continues to be high among households of color.

About 13.8% of Black households and 12.2% of Hispanic households were unbanked in 2019, compared with 2.5% of white households and 1.7% of Asian American households, according to the FDIC survey. The most cited reasons for not having an account were an inability to meet minimum balance requirements and distrust of banks.

“There’s probably no simple or easy solution you could implement overnight" to build trust in banks, said Leonard Chanin, deputy to the FDIC chairman. "If people are suspicious or lack trust or know someone who had a bad experience, I think it's going to take a while to persuade people.”

Lakiarra Lofton, 30, has spent most of her adult life without a bank account. As an 18-year-old college student working part time, she opened an account at one of the nation's largest banks. Lofton remembers not being responsible with her money. She would use her card to pay for gasoline, movie tickets and clothes. The transactions would go through regardless of whether she had the funds. Then the fees would follow.

“Before I knew it, I had to not use that card again and walk away because it just sucks having to look at your bank statement and be in the red,” she said.

Years later, she tried to open a new account at a different big bank. But there was a complication. She says the banker handed her the phone and her old bank was on the line, asking that she repay $200 that she owed from the previous account. She hung up immediately and rushed out the door.

Some banks use services that check applicants' banking history. If that report turns up a history of unpaid fees or mishandling of a bank account, customers' account applications can be denied.

“I was really embarrassed, and I just never looked back,” Lofton said.

Although many alternatives to traditional banking can be expensive, there are exceptions. Cirenia Perez, 48, has organized condinas, an interest-free way of saving money, with friends and family members for 30 years. Each week, a set number of participants each chip in $250 and take turns bringing home the pooled money. Perez says condinas have helped those around her save up for a car, pay off high-interest credit cards and buy holiday gifts.

“When you get your paycheck, you spend it,” she said. “But when you’ve committed to saving a set amount every week, you know you can’t spend that money.”

A Federal Reserve report found that as of 2018, 16% of the U.S. adult population was underbanked, meaning that they had a traditional bank account but also used services such as payday loans, money orders, paycheck advances or check cashing services.

On a recent Friday afternoon, Ernesto Huinac, 35, who works in construction, stopped by ACE Cash Express, a check-cashing store and payday lender on the corner of Western and Slauson avenues in L.A.'s Harvard Park neighborhood. He said he comes in every month to purchase a money order for his rent ever since his landlord stopped accepting cash.

Depending on the money order's dollar amount, the fee can run $1.09 to $3.39. But that didn’t seem to bother him. As far as he knows, his bank does not offer money orders.

Some big banks have begun offering such services — opting to provide underbanked people with what they're seeking rather than trying to force a fit with traditional bank products.

Chase and U.S. Bank both offer a simple checking account that provides electronic payments through debit cards, mobile banking services and access to ATMs but doesn't offer paper checks. OneUnited Bank, the largest Black-owned bank in the country, is among those that offer second-chance checking accounts or a secured credit card that enable people to build or rebuild their credit before moving on to an unsecured card.

"You have all these financial structures in place; it’s possible to come up with services our community needs," said Teri Williams, president and chief operating officer of OneUnited. "But it does take work.”

Black-owned and -led banks were founded to help Black Americans get access to banking services, small-business loans and home mortgages when other, larger financial institutions discriminated against them. But many of these banks don't have enough capital to help their communities build wealth, which — in a vicious cycle — means not very much money flows into the banks.

Credit unions are an alternative to banks and often provide services with lower fees and penalties, though they usually are not open to all members of the general public. For example, USC Credit Union serves university employees, students and alumni, as well as Los Angeles residents who live within five miles of USC's main campus or health sciences campus.

Banks make money off fees and loan interest, which could make some of these community banking initiatives run contrary to the main goal of profitability, said Danso, the Cal State L.A. professor. Then it becomes more of a moral question.

"Banks, given enough incentive, could develop products for these communities to benefit and to help them move toward a higher economic success," he said. "If somebody doesn't have money, do you not take care of them because they don't have money, especially if it's due to systemic issues?”

Alice Rodriguez, head of community impact at Chase, said serving the needs of communities and turning a profit don't have to be mutually exclusive.

"Can you do both? Yes," she said. "I just think you have to be very intentional about how you approach it."

Adetona of South L.A. wants banks to focus not just on flashy initiatives but also on caring about the individuals in the communities they say they want to help. She'd like longstanding personal relationships to count for something when the bank weighs a loan application. She'd like for banks to figure out how to provide straightforward opportunities and services to more people without the looming specter of surprise penalties.

"If they would do that, then they wouldn't need to say, 'I’m going to spend such and such money to invest in the community," she said. "That's good, but just do right."