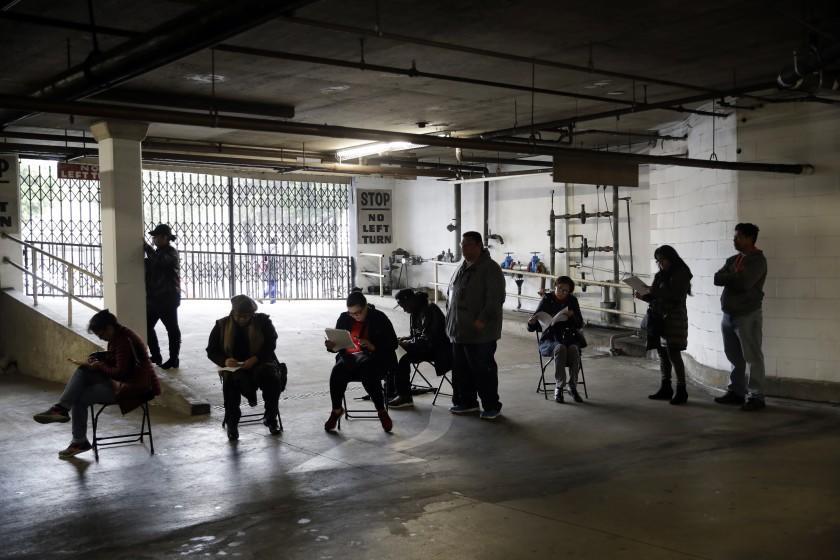 Workers wait in line to apply for unemployment benefits at the Hospitality Training Academy in Los Angeles in March 2020. (Associated Press)

A federal judge on Tuesday prohibited Bank of America from freezing accounts for California unemployment benefits based solely on an automated fraud filter and required it to do a better job of responding when jobless people say their benefits were stolen.

U.S. District Judge Vince Chhabria issued a preliminary injunction that was sought in a lawsuit by 15 jobless Californians who are among thousands who had their benefit debit cards frozen. Bank of America negotiated the terms of the order to prevent the unfreezing of debit cards on thousands of claims it or law enforcement has determined to be fraudulent.

“The court’s order provides substantial and immediate relief to hundreds of thousands of unemployed Californians,” said Brian Danitz, an attorney for unemployed people who sued the bank, in a statement. “The order prohibits the bank from freezing accounts based on a flawed fraud filter, requires the Bank to reopen unauthorized transaction claims it summarily denied, and requires the Bank to comply with the law by investigating those claims and providing provisional credit.”

The judge also ordered the creation of new customer service phone lines to help people whose accounts were affected by fraud.

A representative for Bank of America said it will meet the requirements of the preliminary injunction.

“As California’s unemployment program faced billions of dollars in fraud, Bank of America’s No. 1 goal always has been to ensure legitimate recipients could access their benefits,” said Bill Halldin, a spokesman for the bank. “With this agreement, we are committing to additional measures to help unemployment recipients who have been victimized by fraud receive their benefits as quickly as possible.”

The bank issues debit cards containing unemployment benefits under a contract with the state Employment Development Department, which administers the benefits program.

The EDD said in January that at least $11 billion in benefits had been paid on fraudulent claims and that it was investigating an additional $19 billion in claims.

In October, officials announced the bank had frozen 350,000 debit cards because of suspicious activity that included a high number of claims to a single address. However, many jobless Californians with legitimate claims said their benefits were also frozen, in some cases after criminals hacked into their cards and stole money.

The lawsuit was filed in San Francisco by defendants including Jennifer Yick, who lost work in real estate only to see her benefit account emptied by unauthorized transactions on her Bank of America EDD debit card. She complained that when she tried to report the fraud to the bank, she was repeatedly disconnected without getting help.

The lawsuit alleged that the bank unlawfully deprived unemployed people of essential benefits to help them weather the COVID-19 pandemic, did not implement effective security measures and froze people out of their accounts for months.

The injunction prohibits Bank of America from considering the results of the bank's automated claim fraud filter as the basis for freezing debit card accounts.

The bank is also blocked from denying or closing claims of unauthorized transactions without providing the claimant a written explanation of the findings of its investigation. Within 10 days, the bank must give written notice to people whose accounts are blocked solely based upon its claims fraud filter that explains the bank will unblock the account if the person authenticates their identity.

“The hardship to the defendant from this injunction is outweighed by its benefits to the class members,” said the order signed by Chhabria. “The injunction is also in the public interest.”

The bank has 20 days to set up a dedicated toll-free number that must operate at least 14 hours on weekdays and 10 hours on Saturdays.

The judge was critical of the bank’s handling of the fraud problem during a court hearing this month.

“What seems clear to me from the record is that Bank of America has been violating people’s rights by not doing a good enough job of responding to this crisis,” he said.