The Australian Dollar is trading lower on Friday but off its lows. The currency remains inside a pair retracement zones which have held as both support and resistance for nearly two months. Helping to keep a lid on prices are concerns over China’s policy toward rising commodity prices. Stabilizing Treasury yields and a weaker U.S. Dollar have been underpinning prices.

Market attention will shift to U.S. inflation data due to be released at 12:30 GMT. Economists expect core PCE (personal consumption expenditures) prices to jump 2.9% year-on-year in April, compared with a year-on-year rise of 1.8% a month earlier.

Stronger-than-expected U.S. inflation data could put pressure on the Aussie. Although no one expects the Fed to raise rates, higher inflation numbers could start to encourage the Fed to at least start discussing a plan to begin tapering its bond purchases. 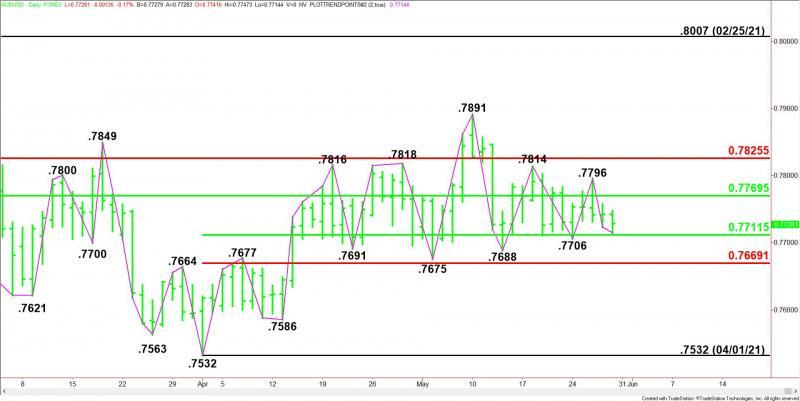 The direction of the AUD/USD on Friday is likely to be determined by trader reaction to the short-term 50% level at .7711.

A sustained move over .7712 will indicate the presence of buyers. The first upside target is a minor pivot at .7755. Overtaking this level could drive the Aussie into the main 50% level at .7770, followed by the main top at .7796.

A sustained move under .7711 will signal the presence of sellers. Taking out .7706 will change the main trend to down. This could trigger a further break into a series of targets including main bottoms at .7688 and .7675, and the short-term Fibonacci level at .7669.

The Fib level at .7669 is not only support, but also a potential trigger point for an acceleration to the downside.