Apple (AAPL) is a leading global consumer technology company that generates 40% of its revenue from the Americas and the remainder from around the world. The company is most famous for its wildly popular smart phone product series known as the iPhone, but it also sells computers, smart watches, tablets, and televisions along with a wide array of services.

Thus far, the results have been terrific as the stock has generated total returns that exceed the S&P 500’s by over 18-to-1 since its IPO. Additionally, the company commands the vast majority of the world’s mobile phone profits. (See Apple stock analysis on TipRanks)

Despite its remarkable success and fat profit margins, AAPL does still face a few challenges. First, its products are quite expensive, pricing many would-be customers out of its products and pushing them towards cheaper-priced competitors. Secondly, as emerging markets mature and AAPL’s products reach saturation level, growth will become more challenging. Thirdly, as technology continues to advance, AAPL may find it increasingly difficult to differentiate its products from competitors', leading to declining margins and/or stagnating volumes.

Despite these risks, AAPL still possesses considerable competitive advantages due to its world-renowned brand, immense financial resources, and army of top tier engineer and artist employees. They will likely continue to fuel innovation and enable Apple to continue capturing the fascination of consumers.

Last, but not least, AAPL is one of the strongest companies in the world and – aided by aggressive share buybacks and heavy investment in innovation – its earnings-per-share growth rate is likely to come in at ~10% on average for the foreseeable future.

From Wall Street analysts, AAPL earns a Moderate Buy analyst consensus based on 18 Buy ratings, 5 Hold ratings, and 2 Sell ratings in the past 3 months. Additionally, the average AAPL price target of $157.58 puts the upside potential at 25.17%. 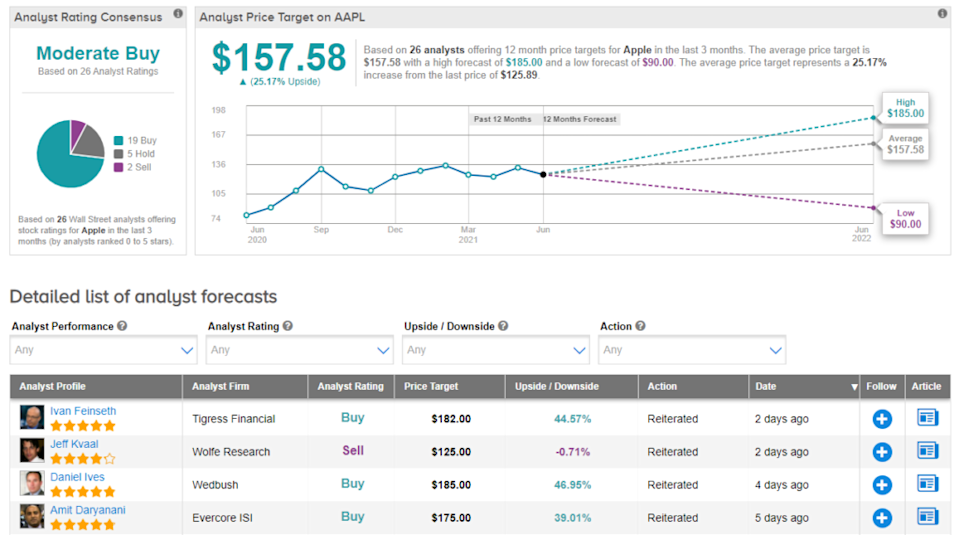 That said, the company has numerous exceptional competitive advantages that should enable it to innovate at, or ahead of, the competition. It has a massive cash pile that it can (and is) using to drive growth via strategic acquisitions and share buybacks, and Apple also has an army of highly talented creatives and engineers. Furthermore, AAPL still enjoys solid short-term growth prospects.

Last but not least, the stock’s price looks potentially attractive, especially given the low overall risk of the company and Wall Street’s overall bullish take on it at current prices.

Disclosure: On the date of publication, Samuel Smith had no position in any of the companies discussed in this article.