Apple: Set Up to Outperform in 2H21

Some of the world’s biggest tech companies have outperformed in 2021; Alphabet, Microsoft and Facebook have all bettered the top indexes’ displays this year and although Amazon has found 2021 relatively tough going, one company lags them all.

That said, J.P. Morgan’s Samik Chatterjee expects that to change as the year progresses into the second half.

“Apple (AAPL) shares have underperformed the broader market by a significant magnitude in 1H21,” the 5-star analyst said. “The upside pressure on volumes for the iPhone 12 series, historical outperformance in the July-September time period heading into launch event, and further catalysts in relation to outperformance for iPhone 13 volumes relative to lowered investor expectations implies a very attractive set up for the shares in the second half of the year and thus we expect AAPL shares to outperform the broader market materially in 2H21.”

Chatterjee puts the lackluster 1H showing down to a lack of catalysts since last year’s final quarter, after the stock outperformed during 2020.

In fact, this year is a bit of an anomaly as Apple has consistently outperformed the S&P 500 over the past seven years, on four occasions by more than 25% and twice by more than 55%.

It should also be noted that most of the gains have usually been accrued in the year’s second half, and AAPL shares always outpace the market between July and September, which is the period leading up to the fall launch of the iPhone’s next model.

Therefore, with the anticipated iPhone 13 launch coming up, this year should be no different. However, there are two reasons why this year’s 2H performance could be better than usual. One, the underperformance so far leaves the shares attractively priced.

Additionally, Chatterjee thinks that heading into the iPhone 13’s launch, investor expectations are relatively low, and as such, with a “multi-year 5G tailwind to the replacement rate and a larger installed base supporting stronger run-rate of annual volumes relative to current investor expectations,” the analyst thinks Apple will not only sell more units than anticipated but thinks the stock is set up to rally in the months ahead.

To this end, Chatterjee reiterated an Overweight (i.e., Buy) rating on AAPL shares and raised the price target from $165 to $170. Investors are looking at upside of 21% from current levels. (To watch Chatterjee’s track record, click here)

Chatterjee’s price objective is actually higher than the Street’s average, which at $158.6, implies shares will gain 13% in the months ahead. Apple retains most analysts’ support but not all are backing its success; Based on 19 Buys vs. 5 Holds and 2 Sells, the stock has a Moderate Buy consensus rating. (See Apple stock analysis on TipRanks) 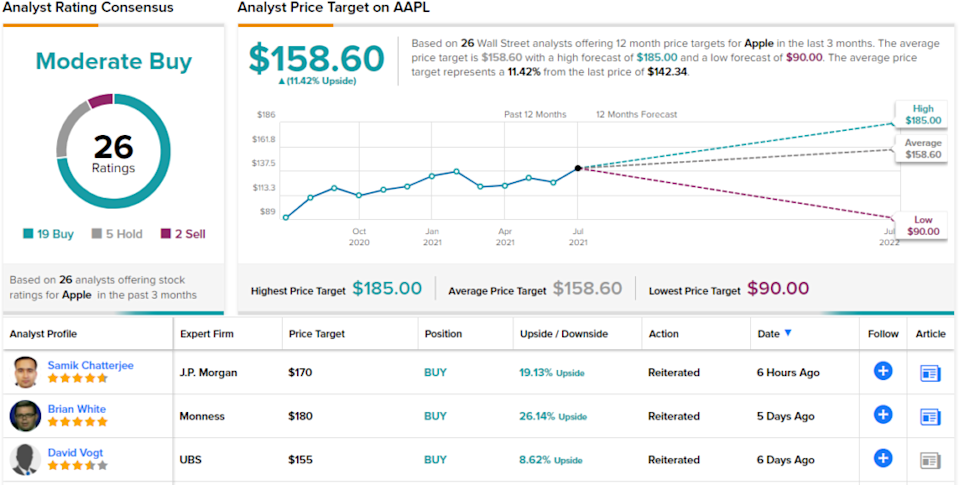