Amazon hit with antitrust suit by DC attorney general, accused of trying to ‘win at all costs’

The AG claims that Amazon’s rules increased the price of retail items across the entire online marketplace, ultimately harming both everyday consumers and third-party sellers.

"Amazon has used its dominant position in the online retail market to win at all costs. It maximizes its profits at the expense of 3rd party sellers & consumers forced to pay artificially high prices, while harming competition & innovation & illegally tilting the playing field," Racine tweeted on Tuesday.

Amazon's third-party seller (TPSs) agreement, up until at least 2019, the complaint alleges, included a clause that explicitly barred sellers from offering products on a competing site — including the seller's own website — for a lower price than the product was listed on Amazon. 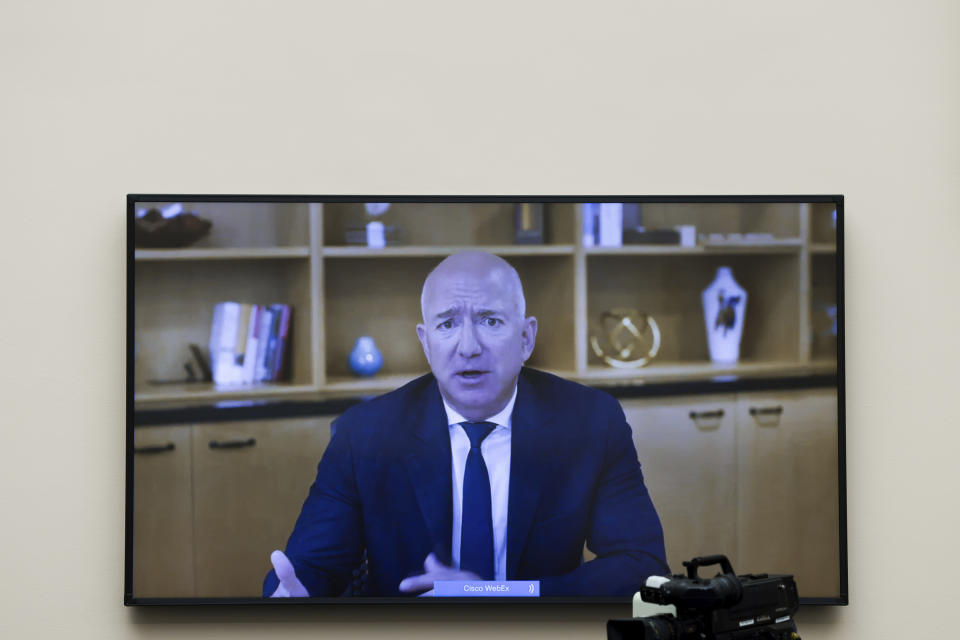 The allegations, which were filed in the District of Columbia's Superior Court, go on to say that Amazon "suppressed competition from other online retail sales platforms, such as eBay, Walmart, and even the TPSs’ own websites." The AG is asking for the court to prevent Amazon from continuing its alleged anticompetitive contact, including through mandatory divestitures, if necessary, and by appointing a corporate monitor to ensure compliance with any court-imposed remedies.

Yahoo Finance reached out to Amazon to request the company's response to the filing and did not immediacy receive a response.

The complaint is the latest antitrust lawsuit faced against a U.S. tech giants since 2020. Google (GOOG, GOOGL) has been hit with three antitrust lawsuits in the last year, and Facebook (FB) was sued by a coalition of attorneys general and by the Federal Trade Commission in December.

The news of the Amazon suit came amid expectations that it's nearing a deal to acquire MGM Entertainment for $9 billion.

Amazon has been under scrutiny from a laundry list of agencies, including the House Judiciary Committee, the Federal Trade Commission, and the Department of Justice, as well as state attorneys general in California, New York, and Washington.

The New York Times reported in June 2020 Amazon is also facing investigations into its private label AmazonBasics products. Investigators have been working to determine if Amazon uses the massive amount of data it has on third-party sellers that list their products on Amazon’s e-commerce site to directly inform decisions on the kinds of products they develop, a claim laid out by an April 2020 Wall Street Journal investigation.

In July 2020, Amazon CEO Jeff Bezos sat alongside the CEOs of Google parent Alphabet, Apple, and Facebook sat before the House Judiciary Committee’s Subcommittee on Antitrust, Commercial and Administrative Law to answer to accusations that each firm uses anticompetitive practices to maintain their market dominance.

Amazon has stated in the past that it does not use non-public data from third-party retailers to determine what kind of products to offer through its AmazonBasics line, but an investigation by The Wall Street Journal found that Amazon employees did in fact access third-party seller data.

Amazon, in the Journal report, said it only used aggregate data gleaned from information about multiple items in the same product category. The Journal’s investigation contradicted that representation, pointing to specific instances of Amazon employees digging into data from individual sellers.

But when pressed on the topic by lawmakers during a hearing before the House Judiciary Committee’s Subcommittee on Antitrust, Commercial, and Administrative Law, Amazon CEO Jeff Bezos said he couldn’t “guarantee” that Amazon employees have never used private data to inform its private label product decisions.

“We continue to look into that very carefully,” Bezos told the committee. “I’m not yet satisfied that we’ve gotten to the bottom of it, and we’re going to keep looking at it. It’s not as easy to do as you would think, because some of the sources in the [Journal] article are anonymous.”

To help cut off criticism of Amazon’s marketplace dominance, in late July 2020 the company published its 2020 Small and Medium Business Impact Report. The document points to the 3.4 billion products U.S. firms list on the company’s stores, the 95,000 drivers the firm’s logistics partners employ in the U.S., and the fact that U.S. sellers average $160,000 in annual sales through Amazon as proof that the business helps sellers more than anything else.

“At Amazon, supporting small and medium-sized businesses is a fundamental part of our work and an extension of our customer-centric culture. Our success depends on their success,” Jeff Wilke, then-CEO of Amazon Worldwide Consumer wrote in the company’s Impact Report.

But during the July House Judiciary hearing, Representative David Cicilline (D-RI) said that the committee’s investigation has resulted in “heartbreaking” testimony from sellers who said they were pushed out of business by Amazon’s competing products.

In addition to Amazon’s e-commerce arm, its Amazon Web Services business is also reportedly under scrutiny by the FTC. According to Bloomberg, the commission is looking into whether Amazon uses its massive market power in the cloud services industry to discriminate against software vendors that offer products similar to its own through AWS.

AWS is now the leading revenue generator for Amazon, and is a major reason the firm’s stock price has continued to rise. It’s currently the top cloud services provider in the world ahead of Microsoft, which sits in second place.

Across the Atlantic, Amazon is under investigation for similar issues by the European Union’s antitrust watchdog, the European Commission. If the company is found to be in violation of antitrust laws in the E.U., it could be struck with a fine of up to 10% of its global revenue.