As I write Friday morning, the S&P 500 has hit another record high.

The bullishness comes in the wake of the June jobs report that showed the economy adding 850,000 jobs last month, easily topping the forecast of 706,000.

Earlier this week, the S&P closed the first half of 2021 at a prior record high, locking in an official 14.4% gain for the first two quarters.

These are fantastic returns given the lingering pandemic, an uneven economic reopening, partisan politics, and heavy sector rotation in the market.

But, as always, the question is “what’s next?”

Will these new highs prove to be a stable floor for further gains? Or will they turn out to be a ceiling that hampers returns?

That’s the question our technical experts, John Jagerson and Wade Hansen, addressed in their most recent Strategic Trader update.

Regular Digest readers know that in recent months, we’ve often turned to our Strategic Trader team in our Friday issues. Their short- and medium-term technical indicators have helped us navigate what’s been a challenging, volatile year at times – despite the strong yearly returns to date.

So, in today’s Digest, let’s see how John and Wade are sizing up the strength of today’s market and its recent all-time highs…and based on that, where the market goes from here.

***Are the new record-highs stable?

For newer readers, John and Wade are the analysts behind Strategic Trader. This is InvestorPlace’s premier trading service, combining options, insightful technical and fundamental analysis, and market history to trade the markets in all sorts of conditions.

In the Strategic Trader update from Wednesday, John and Wade provided a way to view this week’s all-time highs. And it’s not quite as bullish as you might think.

That’s good news, but it also obscures the fact that breadth was very low.

Normally, we wouldn’t be very concerned about this issue on a day when the index’s gains were relatively small anyway. However, in this case, the losers were 11% larger than the winners.

This tells us that there is a minority of leaders pulling the index higher.

To make sure we’re all on the same page, “market breadth” simply refers to how many stocks are participating in a given move. For example, if a majority of the stocks in the S&P advance in a given day, that’s a sign of strong breadth, suggesting uniform bullishness across the market.

But the S&P might also rise based only on a handful of big stocks climbing. Meanwhile, the majority of smaller stocks could actually be trading lower. This would be an example of a rising market without breadth, which suggests the gains are a bit flimsy.

As noted a moment ago, the S&P’s highs earlier this week came with low breadth. After accounting for this, John and Wade write that “the S&P 500 isn’t really at a record at all.”

***How to gauge the state of market breadth

Let’s return to John and Wade:

A convenient way to look for this kind of divergence is to use an ETF that tracks the S&P 500 such as the SPDR S&P 500 ETF (SPY) and one that tracks the same index on an equal weight basis like the Invesco S&P 500 Equal Weight ETF (RSP).

What we would rather see is a period when the equal weight index is outpacing (or at least matching) the standard version.

In the following chart, you can see the current divergence in breadth compared to the breakout in mid-March when the equal weight average was doing much better. More breadth means a breakout is more likely to lead to significant gains. 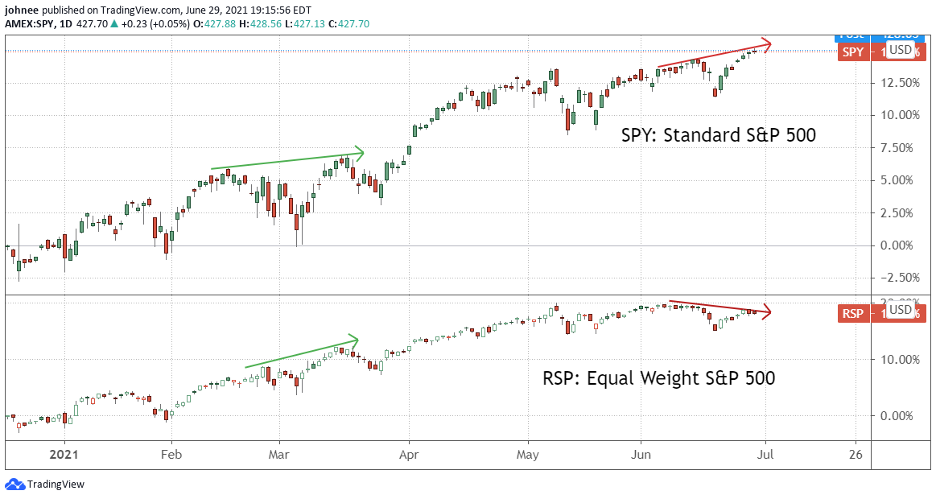 Fortunately, John and Wade tell us that this divergence isn’t necessarily bearish. Instead, it usually predicts volatility rather than major declines. But it can offer insights into what to expect looking forward.

On that note, here’s John and Wade:

This week, the largest stocks in the index are posting gains, but if they stumble in July, then the index will likely follow.

That means stocks like Microsoft (MSFT), Apple (AAPL), Tesla (TSLA), Facebook (FB), NVIDIA (NVDA) and JPMorgan (JPM) had better remain stable while we wait for the smaller index components to catch up.

***An update on breadth since the Wednesday update

Markets are dynamic and can change quickly.

So, how has market breadth evolved since the Strategic Trader update on Wednesday?

Below, we look at the S&P 500 Index (in black) compared to the S&P 500 Equal Weight Index (in green) over the last five trading sessions.

Notice that yesterday saw the Equal Weight S&P Index try to catch up with the weighted S&P, though the rally faltered in the afternoon (circled), resulting in greater divergence. 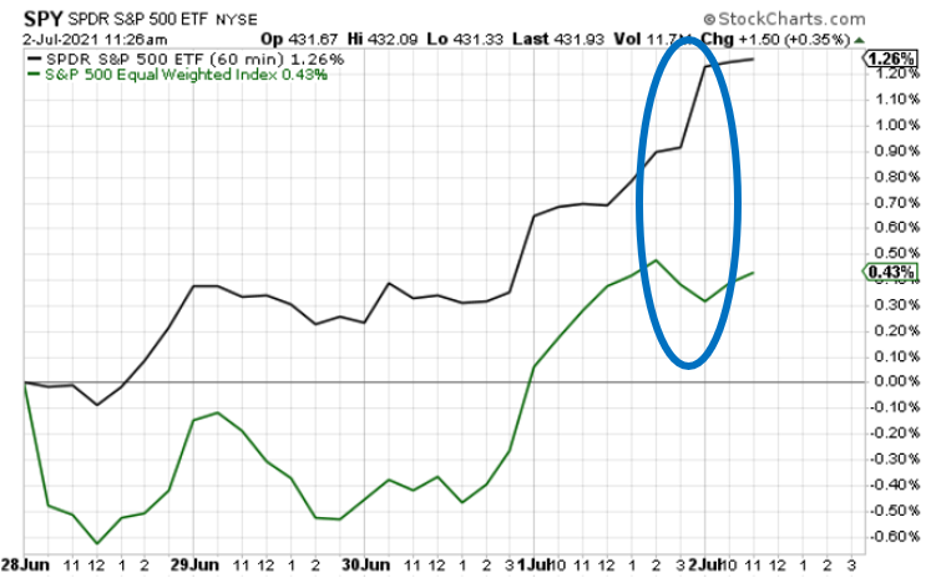 As I write Friday approaching noon, it appears the Equal Weight wants to push higher, but we’ll see.

In any case, for the moment, the divergence that John and Wade identified is still with us.

***Beyond this issue of breadth, what are market fundamentals telling us?

Back to the Strategic Trader update:

Economic growth indicators are still positive. According to the Conference Board, consumer confidence is at a 16-month high, and housing prices are still running higher, which supports spending by homeowners.

We feel these factors give the market enough underlying support to avoid any serious drawdowns while we wait to see what the latest round of infrastructure spending talks generates.

Part of the reason behind John’s and Wade’s confidence here comes from bullish momentum in the transportation sector.

Specifically, John and Wade are zeroing in on the quarterly earnings from FedEx last week, that included many signs suggesting economic activity is trending in a positive direction.

Although there were many operational concerns, FDX brought in $22.6 billion in total sales during its fiscal year that ended May 31. This compares to $17.4 billion for 2020.

If we weigh the evidence as impartially as possible, the 1-3 month outlook for the market is positive. We think investors are waiting for the start of earnings season in two weeks for final confirmation.

If the big banks, tech and retail firms match the underlying performance we have seen from companies that have reported early (FDX, NKE, PAYX, KMX), then market breadth will improve.

This hasn’t changed. Though greater breadth should create additional attractive investment opportunities, John and Wade don’t see a material shift taking place until we get more information based on the upcoming earnings season.

Here’s how they sum up their short-term trading approach:

Our strategy at this point is to continue to focus on the market leaders with the best income potential.

Although we have recently eased back into the tech sector more heavily (new positions in AAPL and MSFT), we have continued to be careful about taking on too much extra risk, and we don’t expect our approach to change before the end of July.

Wrapping, congrats to everyone on a strong first-half of 2021 and today’s fresh highs. Here’s to what we hope will be an even stronger back-half of the year.

The post All-Time Highsâ¦Can It Last? appeared first on InvestorPlace.