Alibaba vs. JD: Which Chinese E-Commerce Stock Is A More Compelling Buy?

E-commerce is experiencing substantial growth in China. According to a World Economic Forum report from earlier this year that cited data from Statista and eMarketer, Chinese e-commerce made up more than half of global Internet retail sales. According to eMarketer, e-commerce in China is expanding at a faster pace than anywhere else in the world.

Alibaba Group Holding Ltd. is a Chinese e-commerce giant, founded by Jack Ma, that operates various online marketplaces that cater to different market segments. The company’s TaoBao is a marketplace that is specifically tailored towards individuals and small businesses while TMall is an online marketplace for premium products.

Ali Express targets global customers and enables them to buy directly from manufacturers and distributors located not only in China but also internationally.

Freshippo is the company’s grocery retail chain while Lazada is an online retailing platform that specifically caters to customers in South East Asia in countries like Singapore, Thailand, Vietnam, Indonesia, the Philippines, and Malaysia.

The company has also started a local services and on-demand food delivery platform in China after it acquired Ele.me in 2018. In FY21, Ele.me’s active customer base on an annual basis was up 20% year-over-year due to improvements in users' experiences. BABA intends to continue investing in the platform as it perceives a cross-selling opportunity between the food delivery service and its other on-demand services.

Last week, BABA reported fiscal fourth-quarter results and posted revenues of 187.4 billion yuan, a jump of 64% year-over-year, beating the consensus estimate of 179.9 billion yuan. However, the company reported an operating loss of 7.7 billion yuan, its first quarterly loss as a public company since its IPO in 2014.

A major reason for this loss was an antitrust fine of 18.2 billion yuan that Chinese regulators slapped on the company in April. Excluding the fine, it would have reported an operating profit of 10.6 billion yuan.

Alibaba had annual active consumers of around 891 million in China by the end of March. The company is targeting growing its Chinese customers to over 1 billion in FY22.

BABA is also looking at strengthening its investment in Taobao Deals, which offers value-for-money products for price-conscious consumers. The company is looking at reaching out to consumers in rural and under-developed areas in China with Taobao Deals. The Taobao Deals app had 130 million active users in March, 27 million more than it had in December last year.

The company provides cloud services to different industries under the brand, Alibaba Cloud, which was one of the company’s fastest-growing businesses in FY21 and a key revenue growth driver. This business has turned profitable over the last two quarters. Alibaba intends to invest more in this business by investing in core products such as big data platforms, database and storage, and other Platform as a Service (PaaS), and Infrastructure as a Service (IaaS) products.

Alibaba believes that Taobao Deals, Taobao Grocery, Freshippo, and new features added to its core platform will continue to be long-term growth catalysts for the company. As a result, BABA continues to remain focused on strengthening these businesses. (See Alibaba stock analysis on TipRanks)

Last week, Robert W. Baird analyst Colin Sebastian lowered the price target from $285 to $270 and reiterated a Buy on the stock. Sebastian commented on the company’s fiscal Q4 results in a research note to investors, “Sentiment remains decidedly mixed, but we continue to like BABA for patient, longer-term investors.”

“However, we expect that "core marketplace" margins should remain relatively steady, even as Alibaba spends aggressively to grow New Retail initiatives (including community/group sales), expand logistics and local services, and drive further momentum for Taobao Deals. Also notable, Alibaba Cloud revenues missed expectations due to the loss of one large customer,” Sebastian added.

Consensus among analysts on Wall Street is a Strong Buy based on 25 Buys and 1 Hold. The average analyst price target of $304.55 implies 41.3% upside potential to current levels. 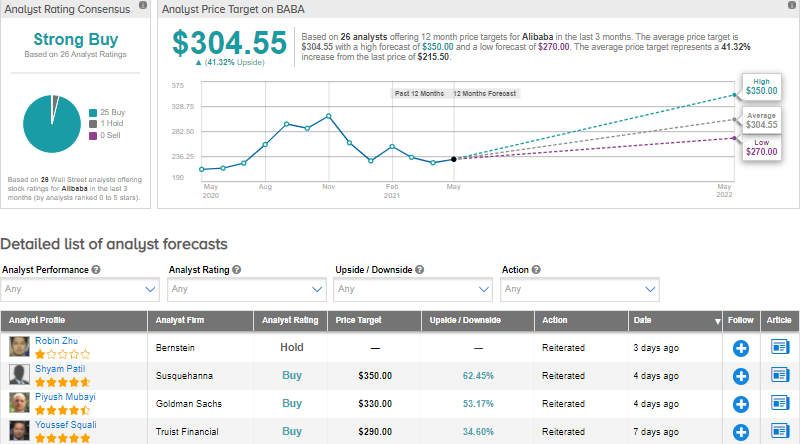 JD.com is a Chinese e-commerce platform that reports primarily under three business segments; retail, logistics, and new businesses. The company’s retail arm provides around 500 million active customers direct access to a wide array of products including electronics, apparel, fast-moving consumer goods (FMCG), and fresh food. The company also has an international platform, JD Worldwide, which enables international brands to sell directly to customers in China, even if they don’t have a brick-and-mortar presence in China.

JD reported net revenues of $31 billion (RMB203.2 billion) up 39% year-on-year surpassing analysts’ expectations of $29.8 billion. Results were supported by outstanding performance in both the services and product sectors.

While the company did not provide any formal fiscal guidance, JD remained optimistic about its retail business over the long term. The company has already brought brands like Starbucks, Decathlon, and Guozijian to its platform. JD will celebrate its 18th anniversary at its upcoming grand promotion on June 18. One of the company's goals is to help more than 230 brands achieve sales of RMB100 million.

JD stated at its earnings call that its retail business model has evolved beyond an online business-to-consumer (B2C) e-commerce model and that the company was looking at ways to become an omnichannel retailer by strengthening its supply chain management and logistics and leveraging its integrated marketing capabilities, to be able to serve its consumers, anywhere and anytime.

The company stated at its earnings call, “JD Retail, as the core business of JD.com, will continue to strive for high-end healthy growth in 2021 and serve as the cornerstone for JD.com's overall development.” (See JD.com stock analysis on TipRanks)

On May 19, Stifel Nicolaus analyst Scott Devitt reiterated a Buy and a price target of $95 on the stock. Devitt said in a note to investors, “As a base case, we expect stable margins in 2Q for JD Retail on a y/y basis as the company compares against one-time benefits in 2Q:20 stemming from government incentives related to the pandemic.”

“We continue to expect measured investments in the company's key strategic areas, including supply chain and logistics, omnichannel, and social commerce will limit margin expansion in 2021. We are modestly raising our FY revenue estimates, reflecting ongoing strength in customer acquisition, though leaving our margin forecast unchanged,” Devitt added.

Consensus among analysts on Wall Street is a Strong Buy based on 15 Buys and 2 Holds. The average analyst price target of $102.24 implies 39.9% upside potential to current levels. 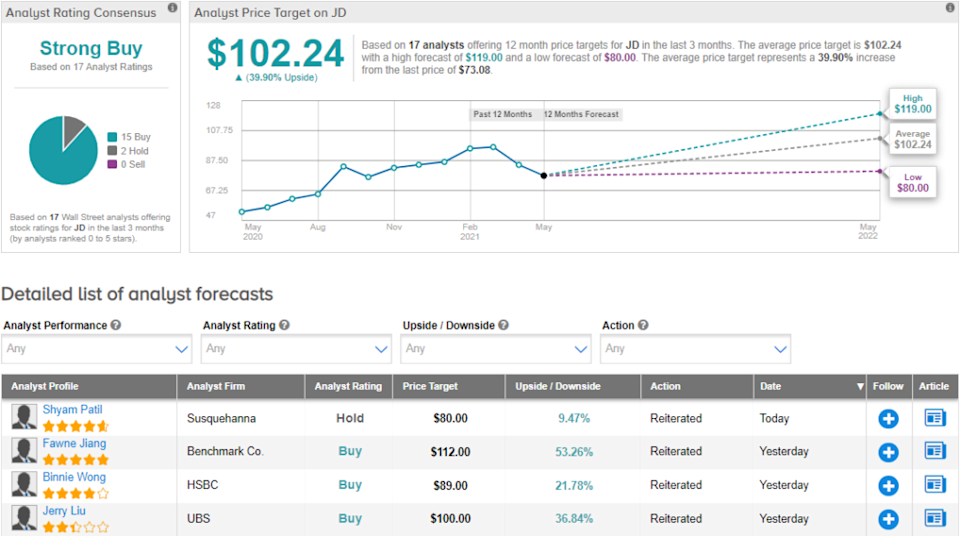 While analysts are strongly bullish about both Alibaba and JD.com, based on the upside potential over the next twelve months, Alibaba seems a more compelling buy.