This week, we’ve seen lots in the headlines…

We have shakeups in Big Oil, gold topping a key market level, an investment legend considering a massive crypto allocation, and Janet Yellen calling for even more aggressive government spending…

In today’s Digest, let’s bounce around to help you track the biggest stories affecting your portfolio.

***First, what should investors expect over the next several weeks from the market?

In recent months, our Friday Digests have featured market commentary from our technical experts, John Jagerson and Wade Hansen, of Strategic Trader. John and Wade have been using key indicators and historical market data to help us navigate what’s been a challenging investment climate.

So, before we hop into news headlines, what’s the latest from John and Wade in terms of what we can expect from the stocks in the short-term?

From their Wednesday update:

Although the back-and-forth trading in the S&P 500 has been a little frustrating, it is likely to continue in the short term.

In addition to short-term inflation concerns and last month’s shocking labor report, the other issue right now is one that we have faced before – uncertainty driven by Washington, D.C…

…investors are discounting the uncertainty around an infrastructure spending bill, the so called “American Jobs Plan” …

…if the potential outcome is unclear, traders are going to take that out of the price of stocks.

John and Wade compare our current sideways volatility to the sideways action we experienced earlier this year. Here’s the chart highlighting these two periods.

The last consolidation lasted about 80 days, and we are only 40 days into this one. We aren’t suggesting that this will last quite as long as it did before, but it helps put the current round of back-and-forth trading in perspective…

In our view, investors are likely to keep prices in this range until we are closer to second-quarter earnings season in mid-July.

The mid-season reports we have seen so far from the likes of Deere & Company (DE), DuPont de Nemours, Inc. (DD), Akamai Technologies, Inc. (AKAM), etc. have confirmed strong underlying growth trends that should trigger a breakout once we have a more clear idea for the potential of reaching a compromise, or using a “reconciliation” bill in the Senate to pass infrastructure stimulus.

John and Wade wrap up by saying that they are maintaining a cautious but bullish bias.

Turning to the news…

Within a 24-hour period, three of the supermajor oil companies – Exxon, Chevon, and Shell – all reported a series of boardroom or courtroom defeats that suggest a significant change in business direction is coming.

In just a few hours on Wednesday, shareholders at U.S. oil giant ExxonMobil supported a tiny activist hedge fund in overhauling the company’s board, investors in U.S. energy firm Chevron defied management on a pivotal climate vote and a Dutch court ordered Royal Dutch Shell to take much more aggressive action to drive down its carbon emissions.

The confluence of events shows the growing pressure on international oil and gas companies to set short-, medium- and long-term targets that are consistent with the Paris Agreement — the climate accord widely recognized as critically important to avoid an irreversible climate crisis.

The news isn’t incredibly surprising. As we’ve noted here in the Digest, long-term demand for oil is in the decline.

Meanwhile, the rise of electric and renewable energy has begun — big tech is making sure of that. For example, Amazon will have 10,000 electric-delivery vehicles on the roads by 2022. And as early as 2024, 80% of Amazon will be operating on renewable energy.

On Wednesday, we learned that Ford is targeting 40% electric vehicle sales by 2030.

In its turnaround plan, the carmaker will be increasing investment in electric vehicles to $30 billion through 2025.

Exposure to the electric vehicle megatrend is a no-brainer for investors today.

The flip side of this is the need to be cautious with Big Oil. As these massive multinationals are forced to adopt to stricter, greener standards, it will likely mean significant restructuring costs and strategic-pivoting, both of which could leave oil investors treading water for years.

***Meanwhile, gold keeps climbing and is flirting with a key psychological level

This week, gold topped $1,900 an ounce. This is the first time it’s pushed north through this level since December of last year.

We last commented on gold here in the Digest just over a week ago.

So, what about gold now? Has it officially begun a new leg higher?

No one has a crystal ball, so we won’t claim to have the answer.

What we can say is that gold appears to have double-bottomed in March, and is now showing strong bullish movement, outpacing the S&P.

More importantly, gold has just broken through its 200-day moving average, as you can see circled below. 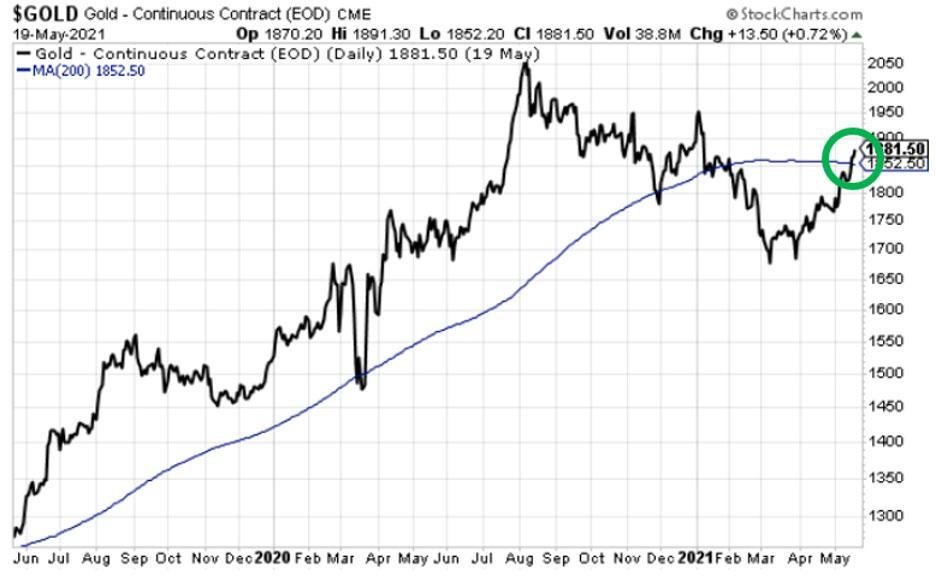 This is a significant technical level. If gold can remain above the 200-day and turn it into a support level, then we anticipate a sustained move higher for the yellow metal.

So far, gold has held its 200-day moving average, and has pushed north.

If you’re looking for ways to play gold, I’d point you toward our macro specialist, Eric Fry. His Speculator portfolio holds a handful of gold plays – one of which received big news earlier this week when a massive mining company took an ownership stake in it, delivering a windfall of cash. Given this, Eric calls the investment “an even more compelling speculation,” so he just raised his suggested buy-up-to price.

To learn more as a Speculator subscriber, click here.

***Meanwhile, the recent volatility in the crypto sector hasn’t scared off one particular legendary investor

Carl Icahn is a billionaire hedge fund manager known for being a “corporate raider.” It looks like he might soon be a crypto raider.

According to Bloomberg, Icahn is interested in getting into the crypto sector in a “big way.”

The potential investment amount is not nearly as important as the fact that Icahn is interested in investing. You see, the billionaire was a crypto skeptic just a few years ago. His change-of-tune is yet another indicator of crypto’s growing acceptance and glowing future.

Icahn, who called bitcoin and other similar assets “ridiculous” three years ago, has changed his tune on cryptocurrencies. He told CNBC in 2018 that he “wouldn’t touch that stuff” but that his dislike perhaps stemmed from not understanding them.

Icahn, whose net worth is estimated at $22 billion, said he hadn’t bought any crypto but was exploring opportunities in the sector. He acknowledged that cryptocurrencies were gaining mainstream acceptance as a consequence of rising inflation…

He said skepticism about the value of cryptocurrencies was a “little wrong-headed,” adding that the only reason the dollar, for example, is valuable is that “you can use it to pay taxes.”

As our crypto specialist and the editor behind Crypto Investor Network, Charlie Shrem, said last week, today’s current weakness in the crypto sector is offering some fantastic prices.

To learn which specific altcoins Charlie is most excited about, click here.

***Get ready for more government spending

Finally, as to yet another reason why you should want to move some of your wealth out of the dollar – and into crypto, or gold, or high-quality stocks – I’d point you toward Janet Yellen’s latest comments.

Yesterday, we learned that Yellen thinks the trillions upon trillions of dollars our government blows through each year isn’t enough.

Treasury Secretary Janet Yellen urged congressional leaders on Thursday to step up spending, saying that the government is operating on a budget that is more than a decade behind the times.

In remarks to a House panel that will have large sway over spending, Yellen said that inflation-adjusted spending has remained stagnant for 11 years.

But let’s be clear here – she wants more money from you and me (or our kids and grandkids). After all, where do you think government funding comes from?

Keep in mind how much the government is already over-spending for things it can’t afford.

According to USDebtClock.org, our current national debt, when amortized across tax payers (and remember, roughly 50% of our citizens pay no federal income tax), already sits at $225,310 a head.

Of course, this is only about half of what each citizen is on the hook for when evaluating our government’s unfunded liabilities. That number stands at $444,514.

Our team has done valiant work implementing these programs with the resources at our disposal.

But we cannot continue to be good stewards of this recovery – and tackle the new bodies of work that Congress assigns to us in the years beyond – with a budget that was designed for 2010.

Make sure you understand the distinction here between a “budget” and “revenue the U.S. has available to spend on programs based on its total tax receipts.” They’re not necessarily the same.

Yellen just wants more money to spend, regardless of whether or not we actually have that money available.

So, does our nation have added dollars to spend on who-knows-what via organic tax receipts?

Below, you can see that 2001 was the last time the U.S. government had a surplus. Since then, government spending has plowed past its tax receipts every single year. See for yourself.

The orange columns represent the size of our yearly deficit since 2000. It’s a sea of orange. 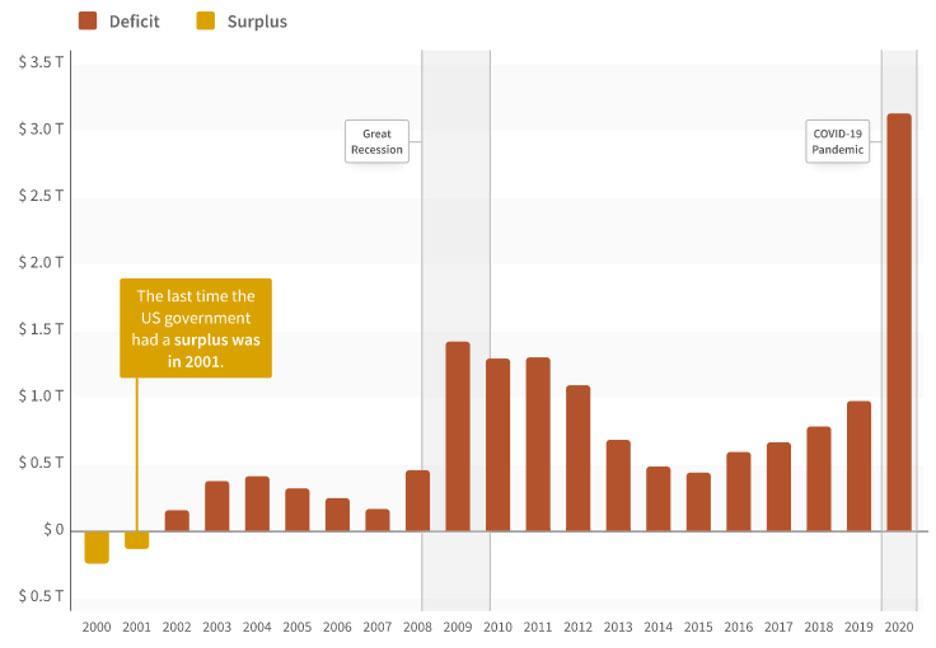 Later today, President Biden is set to unveil his fiscal year 2022 budget. It’s expected to come in at a whopping $6 trillion – the highest sustained level of spending since World War II.

Frankly, it almost doesn’t matter at this point. On our current trajectory, by 2025, funded and unfunded liabilities will put every single taxpayer on the hook for about $994,000 a person.

Unfortunately, we’ve passed the point of no return – after all, no politician will choose the career risk of preaching fiscal restraint. So, expect more money printing, more free programs, more of everything. And in exchange, all it will cost us is the value of our currency.

We’ll continue to keep you up to speed on all of these stories and more here in the Digest.