Goldman Sachs (GS) and JPMorgan Chase (JPM) within the last month announced plans to bring workers back to the office this summer, signaling that some major companies will return to in-person work before the Labor Day target that observers expected.

The trend may be a rude awakening for white collar employees eager to continue remote work over the coming months. But it’s welcome news for office cleaners, janitors, and security staff, many of whom lost their jobs when the pandemic brought widespread building closures. Even with staggered and limited re-openings, the demand for in-person support roles is growing at a rapid clip.

Indeed, the world’s largest job site, looked at how listings in the cleaning & sanitation sector have changed since prior to the pandemic. As of May 14, 2021, job postings in the industry were 46% higher than on Feb. 1, 2020, the month before the onset of the pandemic, according to data provided to Yahoo Finance.

While the world’s largest job site did not segment out security and facilities roles specifically in offices, the heightened awareness and focus on hygiene reflects how the coronavirus may be a tailwind for the foreseeable future. 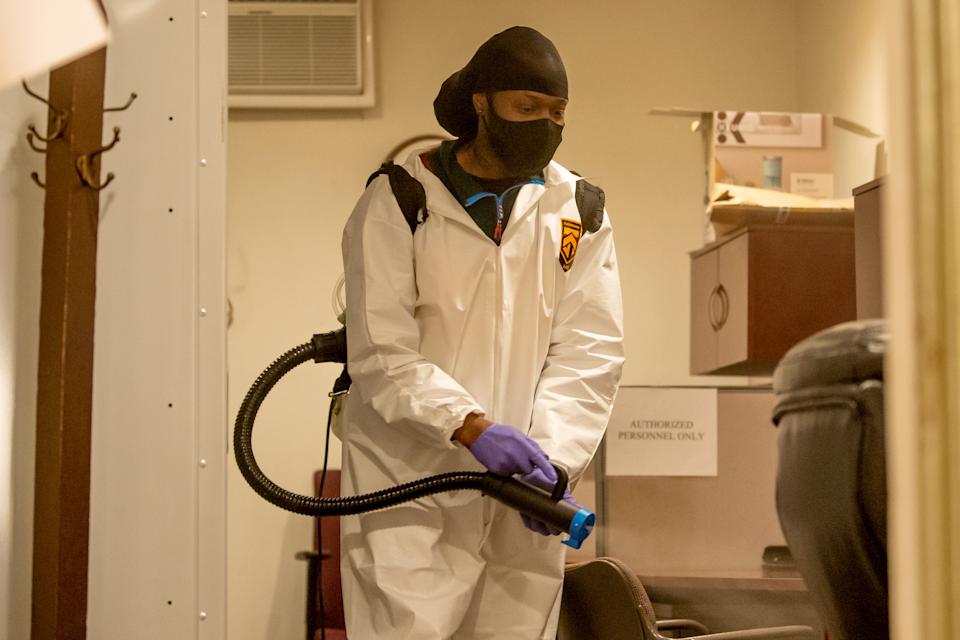 A cleaner a wearing personal protective equipment sprays disinfectant in an office in Grand Central amid the coronavirus pandemic on April 30, 2020 in New York City, United States. (Photo by Alexi Rosenfeld/Getty Images)

Employees who can sanitize and sterilize the office are among the most in demand, perhaps unsurprisingly. Linkedin (MSFT) job openings in sterilization, janitorial and custodial roles saw unprecedented growth in January 2021. The number of U.S. listings for those jobs increased 105% year-over-year before plummeting to 8% in March and rebounding slightly to 19.5% in April.

Similarly, as buildings open back up, employers are scrambling to find security guards, a trend that’s been consistent throughout 2021. In January, in-office security jobs posted on LinkedIn saw a 60% year-over-year increase before slowing to 28.3% in February and 34.3% in March, then rebounding to 61.4% for the month of April, showing the state of urgency for buildings to find the right personnel as they reopen.

Story continues‘Everybody was on pins and needles’

Workplace occupancy ticked up to 27.8% last week, according to a report from commercial security firm Kastle Systems, which tracks the average building use of employees at its sites across 10 major U.S. cities, including New York City and Los Angeles. Still, the occupancy rate remains well below pre-pandemic levels, and had only risen 1.7 percentage points over the past three weeks from 26.1%.

“It’s devastating what the pandemic did to us,” says Ena Softley, 63, a cleaner at the iconic 30-story office building 3 Times Square, in Manhattan. “We’re hoping things will very soon be able to open up at full capacity.”

Softley said her building required 55 cleaners before the pandemic but by last March the staff had dropped to 10. For the workers who kept their jobs, the work was terrifying, she said.

“Everybody was on pins and needles,” she says. “Don’t forget, people were dying around us. We were nervous and afraid. You had to be, to be human.”

She contracted COVID-19 last March, became severely ill, and didn’t return to work until two months later. By now, a few tenants have reopened their offices and the staff at her building has ticked up to 15, she said.

Her employer, building maintenance company Collins Building Services, has found jobs at other buildings for most of her former coworkers. But several of her former colleagues remain out of work, she said. 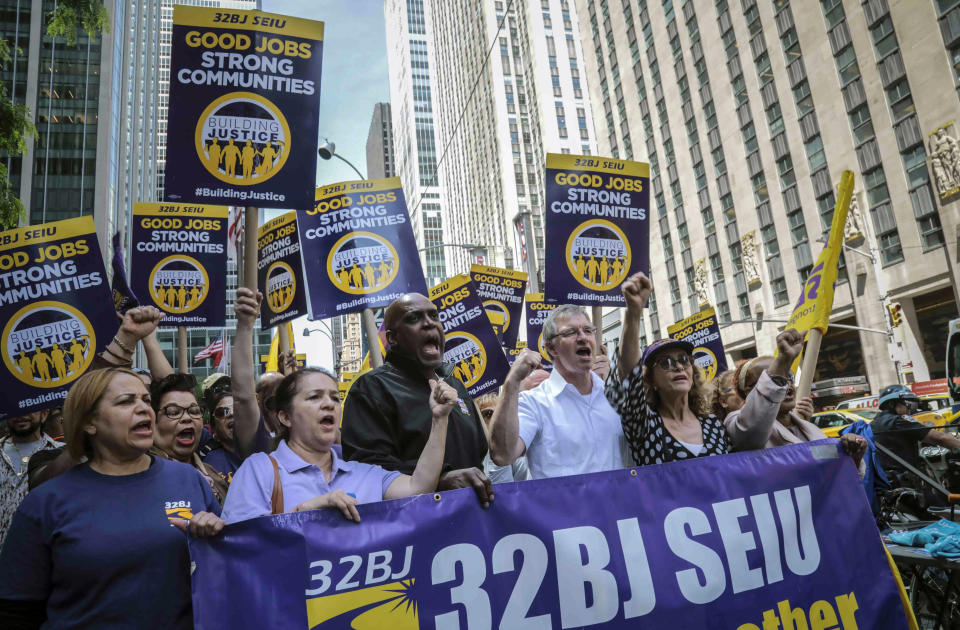 Softley belongs to SEIU 32BJ, a union that represents 22,000 office cleaners in New York City. Last summer, the worst period of the downturn for the union’s office cleaners, 7,000 of them were out of work. Today, 4,000 still remain jobless, said Denis Johnston, vice president of SEIU 32BJ.

He estimates that office building occupancy in New York City stands between 15% and 20%, and acknowledged that office cleaners “are likely to see some contraction” even after the post-pandemic recovery. But he noted that heightened health awareness will require an increased workload to reopen and maintain office buildings at an elevated standard of cleanliness.

“For the enhanced sanitization — the enhanced frequency of cleaning high-touch areas in the lobby like door handles — cleaners are absolutely essential and critical to having the confidence building owners need convincing tenants they’re coming back to a safe, secure work environment,” Johnston says.

The uncertain future of the workplace

But it’s unclear how many companies will return to the office at all — and of those that do, how often they’ll require employees to come into work. Alphabet (GOOG, GOOGL) CEO Sundar Pichai told Yahoo Finance this week that 60% of his employees will return to the office a few days a week, while 20% will work in a new office location and another 20% will remain working from home permanently.

Jay Olshonsky, president and CEO of NAI Global, a worldwide network of commercial real estate firms, said many companies are assessing whether and how to return to the office, and what that means for their support staff.

NAI Global kept its New York City office open during the pandemic but only Olshonsky and a couple of coworkers opted to continue coming into work.

“We used to have cleaning in our offices and we stopped it two months into the pandemic, and haven’t turned it back on,” he says. “If there are two or three people in the office, you can keep your space clean.”

But he said that as the number of in-person employees increases, even companies that return with a hybrid approach will require an office support staff near pre-pandemic levels. 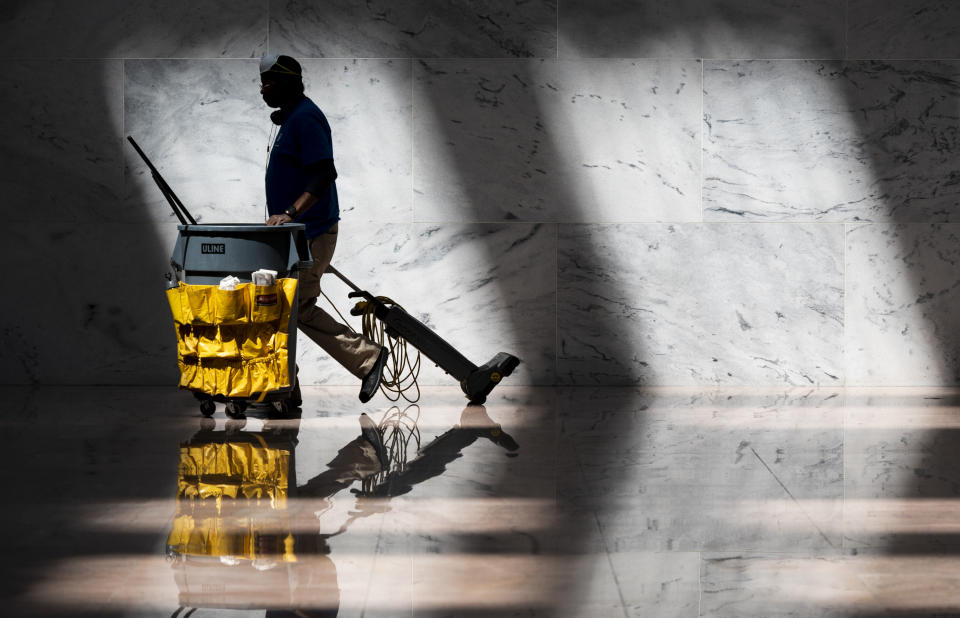 UNITED STATES – MAY 4: A cleaning crew worker walks through a near empty Hart Senate Office Building as the Senate repares to return to session on Monday, May 4, 2020. (Photo By Bill Clark/CQ-Roll Call, Inc via Getty Images)

“When you get to a higher percentage of people, all those [services] go back on,” he says. “People expect offices to be clean and daily trash removed. The question is: How quickly does it come back?”

“Whether or not a restroom is visited by 200 people daily, they use garbage cans that are on the floor, and nightly vacuuming and dusting are needed to get the office back up to standard,” he says.

Nicholas Bloom, a business management researcher at Stanford University’s Graduate School of Business, says he’s surveyed hundreds of firms and between 70% and 80% plan to institute a hybrid work model as the U.S. recovers from the pandemic.

He doesn’t believe that the number of support staff in hybrid offices will need to stay at pre-pandemic levels, in part because offices will seek lower density amid heightened health awareness and adherence to social distancing.

But he expects strong demand for office support workers in the short term as the economy recovers and the U.S. emerges from the pandemic.

“Employment for office support staff in the short run is good in a hot market,” he says. “Even though it appears COVID is not spread by surface touch, still firms are much more focused on cleaning.”

Max Zahn is a reporter for Yahoo Finance. Find him on Twitter @MaxZahn.

Jeannie Mai Jenkins fights to normalize mental health support: 'Everybody deserves to get that help'

Warren Buffett: 'Chevron's not an evil company in the least'