7 Cryptos to Watch as the Market Rebounds From Weekend Lows

Over the last month-and-a-half period, the once blazing hot cryptocurrency sector received a rude awakening. No longer was the sentiment about blasting off to the moon. Instead, the atmosphere became strikingly morose, with proponents begging individual cryptos to hold onto their critical support lines. The fallout left a lingering question — if this sector is so transformative, why are digital assets tumbling?

Though the potential for blockchain-based platforms to change the financial and business paradigm is undisputed, the issue is that the fundamentals of the underlying technology and the investment potential of the myriad cryptos out there are two different topics. Above all else, you should regard virtual currencies as you would any stock, bond or commodity. Yes, the fundamentals are important, but if people don’t want to buy them, it’s difficult to spark broader bullish action.

Recently, the New York Times published an interesting article about Internet Computer (CCC:ICP-USD), a digital coin connected to a blockchain protocol that scales smart contract computation and data and executes them at incredibly high speeds and efficiency. Naturally, many retail investors jumped on its initial coin offering (ICO) — a sort of initial public offering (IPO) for cryptos. Everything seemed on the up and up, until it wasn’t.

Just to be clear, I’m not throwing any mud at Internet Computer. And for fairness, the folks behind the project deny any wrongdoing. However, the NYT reported that managers handling the ICO appeared to have profited from insider dealings while leaving retail supporters in the cold. I don’t want to get into a debate about what happened. Rather, the main takeaway is that even with cryptos, you can never fully protect yourself from unjust incidents.

But what does this have to do with virtual currencies overall this week? Don’t fall in love with any coin or token — you want to be cold and calculating with your investments. At the end of the day, it’s your money. Here’s an update on the top cryptos to watch this week.

As I write this, cryptos are making big gains from the past weekend’s lows. However, I encourage readers to be careful: this sector has a lot to prove before you can comfortably invest the bulk of your speculation funds. 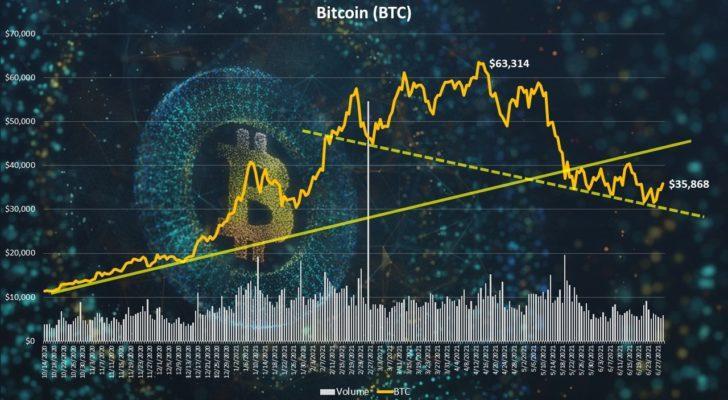 Over the years, one of the main developments for cryptos was an effort by alternative blockchain programmers to spark interest in virtual currencies other than Bitcoin. After all, you don’t see one stock in the equities market force other securities to trade in lockstep with it. But with cryptos, wherever Bitcoin goes, so too does everything else.

Like it or not, all eyes remain on Bitcoin despite the presence of exponentially more altcoins or alternative coins. What’s undeniably problematic, though, from a nearer-term perspective is that BTC’s trading action appears weak and vulnerable to further corrections. Yes, the bounce higher recently is encouraging, but you also must look at the bigger picture.

Pull up a daily technical chart, and you’ll see that Bitcoin trades below both its 50-day and 200-day moving averages. Further, the current upside has yet to change the downward bias of the overall trend channel. For those looking to buy in, I wouldn’t be opposed to a modest scoop of BTC — just in case. However, I’d keep the powder keg dry for a much more appealing discount. 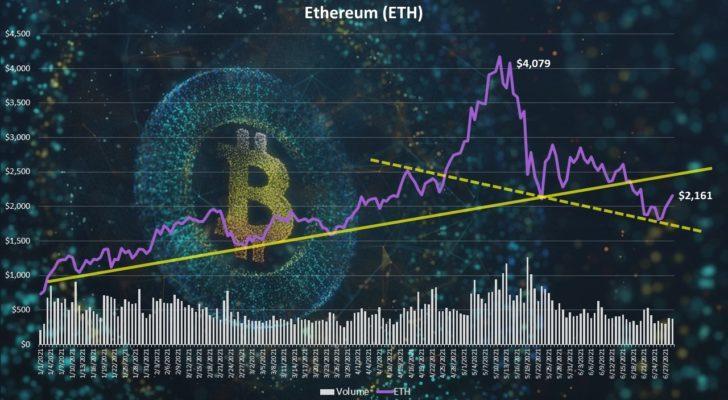 Having maintained a vice grip on the number-two slot of virtual currencies ranked by market capitalization for years, Ethereum is the blockchain programmer’s go-to platform. The architecture undergirds countless decentralized projects, giving the ETH coin strong fundamental value. Nevertheless, as I warned earlier, Ethereum closely tracks Bitcoin. While that’s a positive when things are going well for cryptos, it’s not so great when the opposite is true.

As with BTC, I’m skeptical about Ethereum in the nearer term. Sure, if you want to secure a position at these deflated prices, I wouldn’t begrudge a modest position. But I genuinely believe that a bigger discount is on the way. Therefore, if it were me, I’d keep my fiat currencies stocked up, ready for the real opportunity.

Still, it should be noted that on a daily chart, ETH is trading below its 50-DMA but above its 200-DMA. This suggests that there’s some bullish support remaining for Ethereum. But with so much near-term negativity for cryptos, ETH needs to break above $2,500 for investors to feel comfortable. 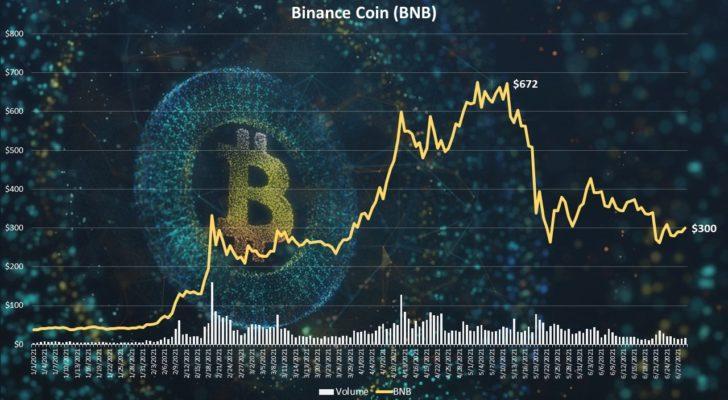 Fundamentally, Binance Coin attracts much attention globally, as Binance itself is one of the biggest exchanges for cryptos. Further, the exchange offers a broad range of coins and tokens. If you can’t find it listed on Coinbase (NASDAQ:COIN), chances are, you may be able to secure it through Binance. And if that doesn’t work, well, you might want to rethink the investment narrative of the coin or token in question.

Further, according to CoinMarketCap.com,

“Binance has launched a whole ecosystem of functionalities for its users. The Binance network includes the Binance Chain, Academy, Trusted Wallet and Research projects, which all employ the powers of blockchain technology to bring new-age finance to the world. Binance Coin is an integral part of the successful functioning of many of the Binance sub-projects.”

But is this compelling storyline enough to boost the BNB coin? While I might get heat for this statement, I am extremely concerned about Binance Coin — more so than any other of the major cryptos. Simply, it’s printing a head-and-shoulders pattern, which is one of the more reliable warning signals of downside action within the discipline of technical analysis. 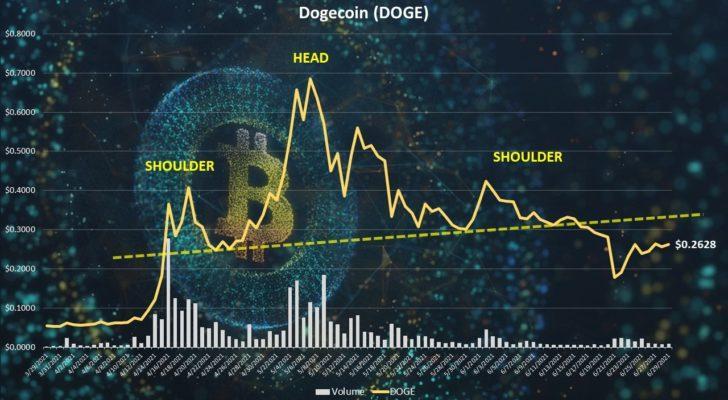 Speaking of head and shoulders, this is a great segue to bring up Dogecoin. Yes, I know — my discussions regarding the joke cryptocurrency have reached peak-DOGE recently. There’s just been too many of them over a short period of time. Thus, I’m going to keep this discussion short.

As I mentioned in prior updates for hot-trending cryptos, Dogecoin was printing a bearish H&S pattern on its price chart. Moreover, when I wrote a piece for this subject on Blockster.com, I mentioned that this was a classic H&S pattern; that is, the declining volume trend was confirming the bearish implications in the Dogecoin price.

Sure enough, DOGE made “good” on this harbinger, sending the coin down to worrying levels. But since the doldrums of this past weekend, Dogecoin pinged an impressive performance from a percentage point-of-view.

Nevertheless, caution is the order of the day. DOGE is still well below the neckline of the H&S pattern, which means buying in would likely be a treacherous affair. 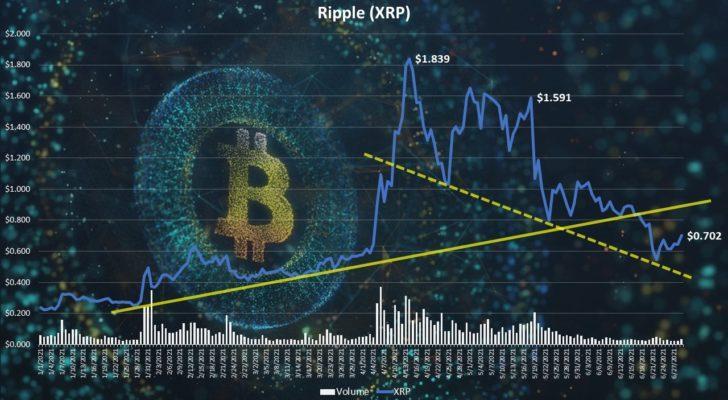 Presumably designed as a blockchain protocol to work with the traditional financial system rather than against it, Ripple was controversial from day one. During the dawn of cryptos, I distinctly remember public forums making dismissive remarks about XRP, basically accusing it of being a centralized platform while the whole point about the blockchain was to impart decentralization.

Still, the larger concept was intriguing — and still is. By utilizing the power, efficiency and decentralized trust model of the blockchain, it’s easier and cheaper to send money across borders than it is through traditional wire transfers. Further, Ripple Labs, the team behind XRP, secured deals with mainstream institutions, bringing early credibility to blockchain-based applications.

But the tie-ins with such institutions caught the attention of the Securities and Exchange Commission (SEC) and not in a pleasant way. As you probably know, Ripple Labs is mired in a lawsuit, clouding the investment proposition of XRP.

Should contrarians gamble on Ripple in case the underlying company wins the lawsuit? Even if it does, it would do so at a particularly bad time for cryptos. I would hold off on the idea. 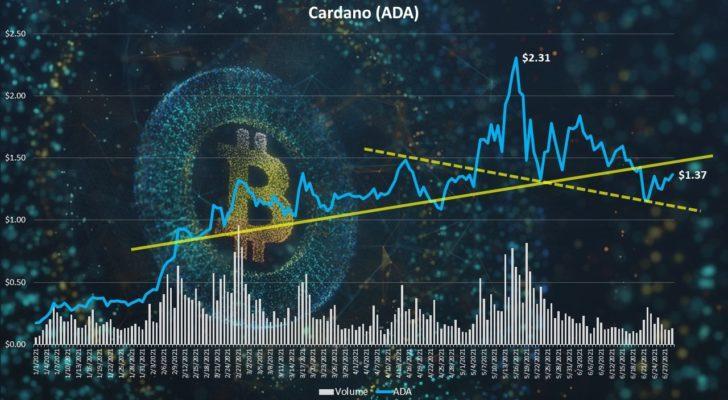 As one of the few blockchain projects attempting a proof-of-stake protocol from the get-go, Cardano organically attracted much attention. Typically, the cryptos you find in the market are undergirded by proof-of-work protocols. Essentially, miners need to invest in their algorithmic-based operations through extensive energy expenditures to increase their probability of acquiring reward cryptos.

On the other hand, proof of stake emphasizes engagement of the underlying network over brute computing power. Theoretically, this protocol is much more environmentally friendly due to the reduced energy requirements. As well, it’s easier in principle for miners to do their thing as utility costs will be much lower than, say, mining Bitcoin.

Here’s the issue with staking, though: By reducing the cost of mining, you invariably reduce the profitability of the associated rewards. The thing about Bitcoin is that while it’s very expensive to mine, if you acquire said coins, their value should exceed acquisition costs.

I’m not so sure you can say that about Cardano, which may be one of the reasons why ADA has struggled since mid-May. As with the other cryptos, I’d be on the cautious side. 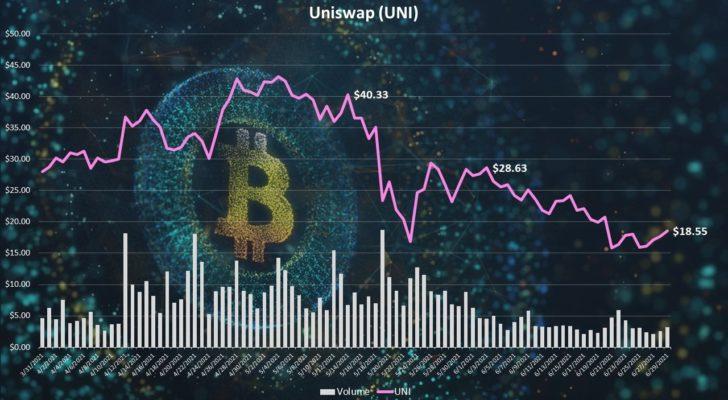 Among the cryptos on this list, I really flubbed up with Uniswap, having acquired the tokens near their all-time highs. Back then, it didn’t seem like a bad idea, as UNI had formed a bullish trend channel. Despite the choppiness, I anticipated that Uniswap tokens had a decent chance of continuing the trend. Needless to say, I was wrong.

Looking back at its technical chart, I may have mistook UNI’s upward channel as being bullish when all this time, it may have printed a broadening wedge pattern. Due to the narrow angle of the pattern as it relates to Uniswap, though, I failed to recognize it.

It’s a shame, too, because fundamentally, Uniswap is one of the more intriguing blockchain projects. According to CoinMarketCap.com, UNI is tied to a “popular decentralized trading protocol, known for its role in facilitating automated trading of decentralized finance (DeFi) tokens.” The way I look at it, Uniswap offers true potential for disruption because it can set the foundation for intermediary-less crypto exchanges.

But because everything in this sector is tied to Bitcoin, you won’t find me adding to my position. Instead, I’m being patient and waiting for a better opportunity.

On the date of publication, Josh Enomoto held a LONG position in BTC, ETH, DOGE, XRP, ADA, UNI. The opinions expressed in this article are those of the writer, subject to the InvestorPlace.com Publishing Guidelines.

The post 7 Cryptos to Watch as the Market Rebounds From Weekend Lows appeared first on InvestorPlace.