It has been a great year for the stock prices of some very well-known companies, and in a few cases surprisingly so.

Such double-digit appreciation on the S&P 500 comes despite several formidable headwinds swirling around, ranging from the Archegos Capital Management blowup in the winter to threats of higher taxes from the Biden administration to a clear change in tone on monetary policy from the Federal Reserve.

Underneath the hood of the S&P 500, there have been a host of eye-popping gains as seen below in a new chart out of Goldman Sachs.

In the not-so-surprising category, there are 69.1% and 49.1% respective increases in the stock prices of Ford (F) and General Motors (GM). Both auto giants have benefited from strong pricing power amid vehicle shortages brought on by the yawning semiconductor shortage. Each has also been praised by Wall Street for aggressive pushes into electric vehicles as they look to challenge EV leader Tesla (TSLA).

The 53.3% surge in shares of Nvidia also looks to be rather deserved. Analysts have clung onto the chip-maker's stock this year amid strong results for its gaming chips and crypto mining exposure. The impending $40 billion deal for Arm is also seen as a game-changer for the company's future earnings power. 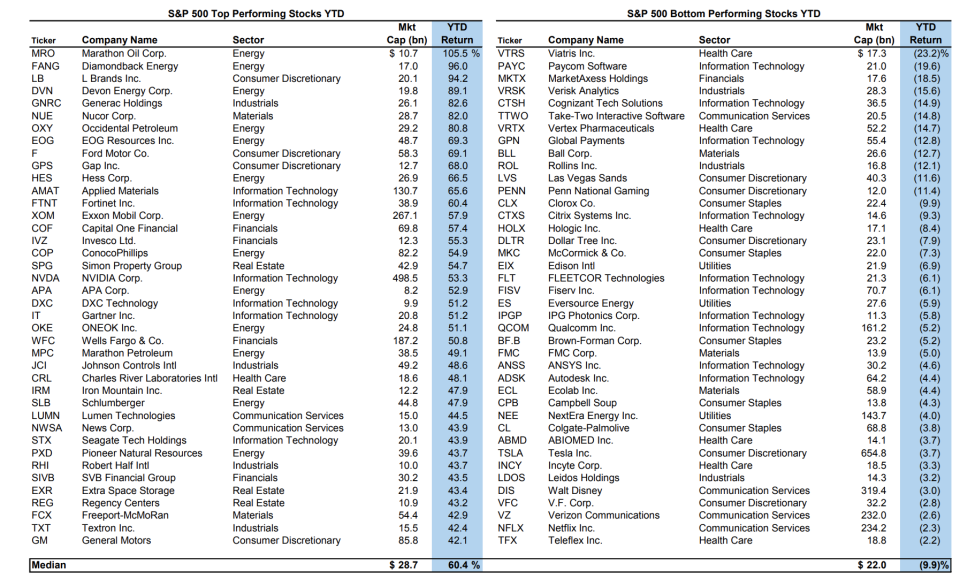 Not too shabby of year for the stock prices of many companies.

As for the surprises in the market, there are several that standout.

For starters, Gap's shares have shot up a mind-bending 68% year to date on optimism over Kanye West's new apparel collection for the retailer and people buying clothes en masse for their post-pandemic lives. But, the company is still seen as a longer term market share loser by most Wall Street analysts.

Wells Fargo (WFC) shares are shockingly up 50.8% this year as new CEO Charlie Scharf struggles to stabilize the company after its highly publicized account fraud scandal. The bank is generally viewed on the Street as not as fundamentally sound as rivals JPMorgan (JPM) and Bank of America (BAC).

Meanwhile, five of the top 10 best-performing stocks in the S&P 500 this year are energy companies. While the names appear to be tracking the 45% rise in oil prices this year, the gains are somewhat surprising given the increased ESG focus among institutional investors. ExxonMobil is interestingly up 57.9% this year even as it battles through a board shakeup, a bloated cost structure and questions about the leadership of its CEO Darren Woods.

Whether the S&P 500 could continue its blistering pace evidenced in the first half is anyone's guess. The aforementioned headwinds to stock prices are unlikely going anywhere, and in fact could blow harder, some analysts say.

"You've got two big headwinds facing the market in the next six months that I think is likely to restrain the appreciation. The first issue is higher rates [interest]. The idea of higher rates is typically associated with some lower valuations," Goldman Sachs chief U.S. equity strategist David Kostin said on Yahoo Finance Live.

Kostin says the other issue facing investors comes at the hands of lawmakers.