The curtains have come down this week for bulls in many of the market’s most popular marquee shorts. But on Wall Street and where the show must always go on, the following oversold, most-shorted stocks price charts look ready to be tapped for roles as best supporting tickers to rally.

AMC (NYSE:AMC). GameStop (NYSE:GME). Bed Bath & Beyond (NASDAQ:BBBY). The well-known brands and heavily-shorted stocks were in the spotlight for the Reddit crowd the past couple weeks with sequel-like price spikes paying homage to January’s short-squeeze spectacle.

Taking centerstage, shares of cinema chain AMC jumped as much as 500% to all-time-highs. That put its valuation north of $30 billion and larger than half the S&P 500. This week, however, and much like the original script, there’s been no happy ending for bullish traders late to the show and caught paying inflated admission prices.

GME stock has been shot down by roughly 16% for the week during Friday’s session. AMC is being booed by 10%. And BBBY is hanging on by a thread to a flat performance, but showing a bathroom-worthy slip and fall of 30% from last week’s high.

Call the bearish action a reversion to the meme. But given some time to lick their wounds, maybe a bullish trilogy will headline again? Maybe. Next week though, the following three most-shorted stocks offer oversold price charts which could be nominated for similar crowd-pleasing performances. Just remember to use the exit before the show is over. 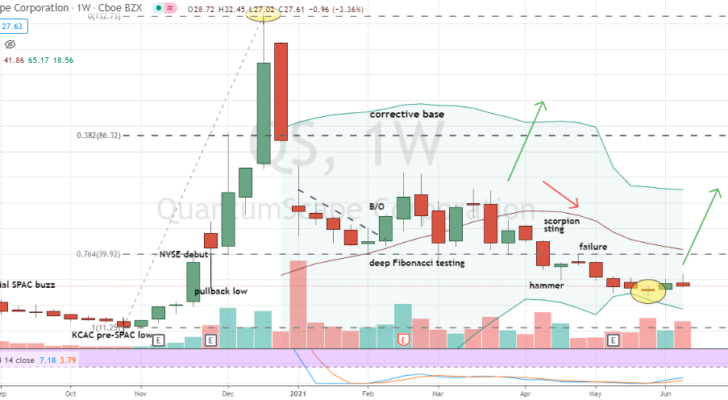 The first of our oversold most-shorted stocks to buy are shares of QuantumScape. QS stock maintains short interest of about 22%. The army of disbelievers are led by short-seller Scorpion Capital who’s called the outfit a pump-and-dump scam.

But the next-generation multilayer solid state battery play has it’s influential supporters as well. Volkswagen (OTCMKTS:VWAGY) and Microsoft’s (NASDAQ:MSFT) Bill Gates are substantial backers with investments in Quantumscape totaling in the hundreds of millions of dollars.

Whether QS’ promising lab results can make it into the EV in your driveway is estimated to be a couple years out. But it may never get there either. And the battle in this most-shorted stock is one which the bears have been winning on the price chart since late last year. Still, a resurrection in QS stock may already be in motion.

Technically, shares are resting near last week’s doji low confirmation signal price of $27.74. Is this “the bottom?”There’s no guarantees. But given the 80% hemorrhaging in shares and today’s supportive oversold stochastics crossover pattern, I like the odds.

To go long QS shares, a collar which can take advantage of this most-shorted stock’s volatility with a bullish bent looks to be in order. One favored vehicle of this type is an August $35/$45 combination. 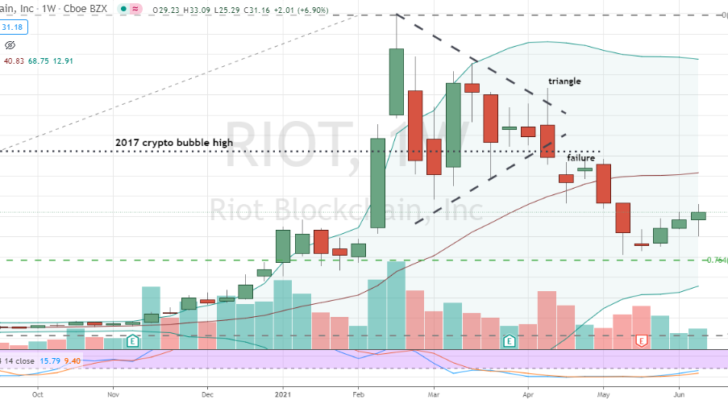 Riot Blockchain is the next of our oversold, most-shorted stocks to buy. The crypto mining play is home to a resident bear population of nearly 29%. But RIOT’s group of so-called sophisticated shorts appear in jeopardy of overstaying their welcome.

The weekly price chart reveals RIOT stock is nearing completion of four weeks inside candlestick consolidation. Formed within this most-shorted stock’s hammer-like challenge of 76% support and stochastics bullishly-aligned in oversold territory, a purchase above the hammer’s high of $33.40 looks in order.

To prepare for an emerging uptrend and avoiding any further mining efforts from RIOT’s bears, I’d recommend buying shares as part of a September $30/$55 collar combination. 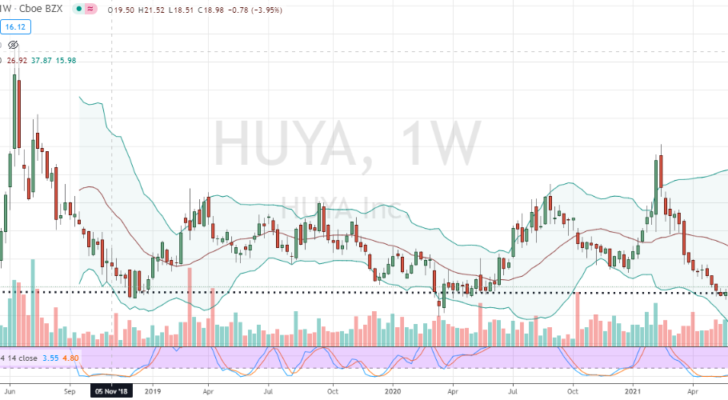 The last of our most-shorted stocks to buy is China-based HUYA. The live streaming platform for gamers and other entertainment content has been under pressure with bears totaling 30% of the float controlling the action this year.

Blame the weakness in shares on broader delisting worries for Chinese companies and maybe concerns of HUYA’s subscribers spending more time outdoors than in front of a screen post-Covid 19. Today though, fears driving HUYA stock to a decline of 20% in 2021 have placed shares in a game-changing position for bulls.

Technically, the weekly price chart of this most-shorted stock reveals a third looser challenge of lifetime support near $15. With a confirmed doji bottoming pattern in place, higher and above average volume and an oversold bullish stochastics setup, HUYA stock is ready to buy today.

To have the investment game tilted in your favor, the October $15/$25 collar looks like a smarter way to play this most-shorted stock.

On the date of publication, Chris Tyler holds (either directly or indirectly) positions in Grayscale Bitcoin Trust (GBTC). The opinions expressed in this article are those of the writer, subject to the InvestorPlace.com Publishing Guidelines.