But what should investors expect from next week’s show? If we’re to trust the price charts, three other supporting cast members should find stock performances worth today’s price of admission.

A sequel to this year’s short-squeeze production of “the quick and the dead” co-created by Reddit’s Wallstreetbets has been under redevelopment rights this week with star power from AMC (NYSE:AMC) in the spotlight. And for exceptionally good reason. Shares surged by as much as 200% in the last five sessions.

Behind AMC ‘s bullish theatrics some are once again crediting hungry Redditors in need of new spots to place their buy orders. And to be sure, heavy speculation in cryptocurrencies Bitcoin (CCC:BTC-USD), Ethereum (CCC:ETH-USD) and Dogecoin (CCC:DOGE-USD) turning south of late does support the idea of a rotation going on. Arguably though, there is more to the story.

Who’s next within today’s universe of most-shorted stocks to deliver breaking news that can stir more than just the imagination? We won’t know until after the fact of course. But right now three diverse market companies with bears wagering against them are hinting the end may be near in a particularly good sort of way for bullish investors. 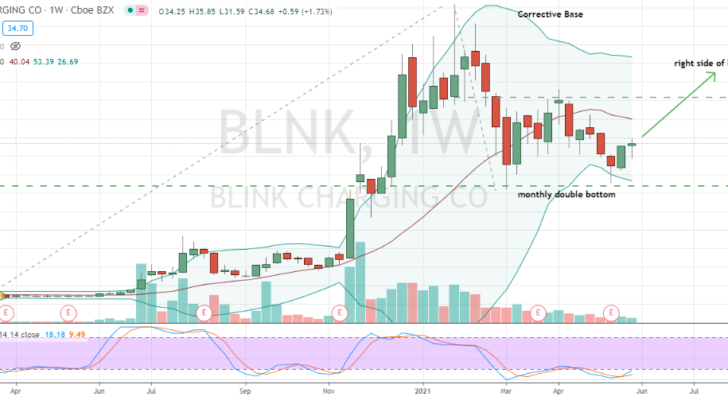 The first of our most-shorted stocks to buy are shares of Blink Charging. Short interest in BLNK stock come in at a hefty 36%. What does the resident bear population know? Optimistically and in bulls’ defense of this leading EV charging play, maybe as much as they thought they knew about AMC stock.

Technically, a weekly double-bottom pattern off 62% support has been confirmed over the past two weeks by price follow-through and a bullish stochastics crossover. Today and based on the size of the corrective formation, a successful move into the right side of this base and relative to risk, still looks ripe for playing.

To better position for the upside possibilities while keeping the downside exposure contained, I’d suggest structuring a July $35/$45 collar combination around this most-shorted stock. 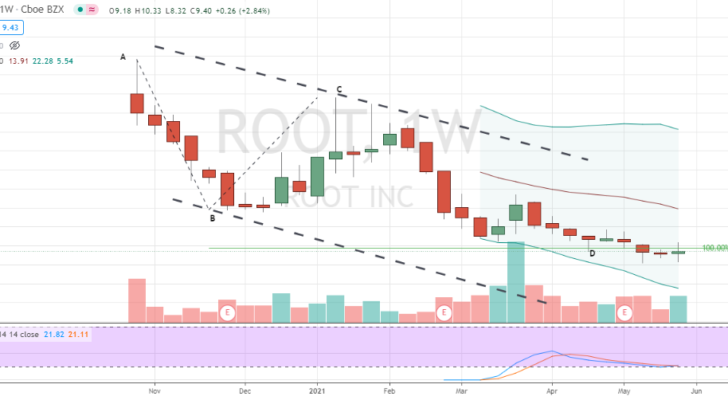 Root is the next of our most-shorted stocks to buy. Root is a technology-based disruptor of insurance products operating a direct-to-consumer model and “usage-based” telematics. It sounds promising, but ROOT doesn’t have a first-mover advantage as other established competition is working those angles. Nevertheless, today conditions on the price chart are shaping up for investors other than ROOT stock’s bearish short interest of 32%.

Technically, the weekly chart of ROOT reveals a stock that’s caught in a downtrend. However, the bearish cycle may have finally met its match. A Fibonacci-based two-step or mirror move pattern wherein leg AB matches CD completed last month. And it could be the start for a new bullish cycle.

Thus far, this most-shorted stock has faltered beneath the pattern’s initial hammer at point D. But a second hammer formed two weeks ago. And with improved flattening stochastics at oversold levels, the signs for a new uptrend to emerge are looking decent.

Right now and for those that enjoy insurance for investments other than for homes and autos, a rally back above the hammer high of $10.13 looks worthy of writing a July $10/$12.5 collar policy on. 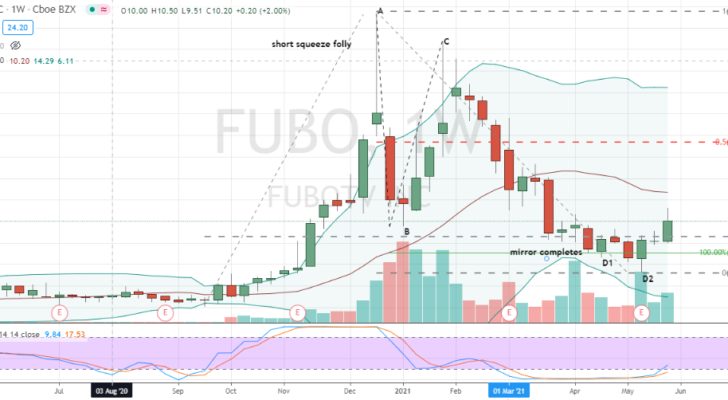 The last of our most-shorted stocks to buy is FuboTV. Earnings this month from this streaming sports upstart has drawn the increased attention of bears with short interest rising from the mid-teens to just over 21%. But could this be another instance of the naysayers having it all wrong? It appears so.

Off the price chart, FUBO delivered street-beating triple-digit subscriber and revenue growth. Of course, investors drawn to shorting the stock after the report could be focused on other line items or something management did or didn’t state, right? It’s always a convoluted possibility.

Still, it’s also a fact those bearish positions are getting sacked. And today bulls are in strong position to take further control of this most-shorted stock on the price chart.

Technically and as the provided weekly view shows, FUBO stock has successfully completed a two-step pattern at point D2 following a failed first attempt. And reinforced by a bullish stochastics setup, I’m a fan of a much stronger second half in 2021 for this most-shorted stock.

To make a play toward an eventual challenge of FUBO’s midfield line near $39, investors may wish to suit up with an August $25/$35 collar combination for solid profit potential and protection.

On the date of publication, Chris Tyler holds (either directly or indirectly) positions in Beyond Meat (BYND), Grayscale Bitcoin Trust (GBTC) and Grayscale Ethereum Trust (ETHE). The opinions expressed in this article are those of the writer, subject to the InvestorPlace.com Publishing Guidelines.