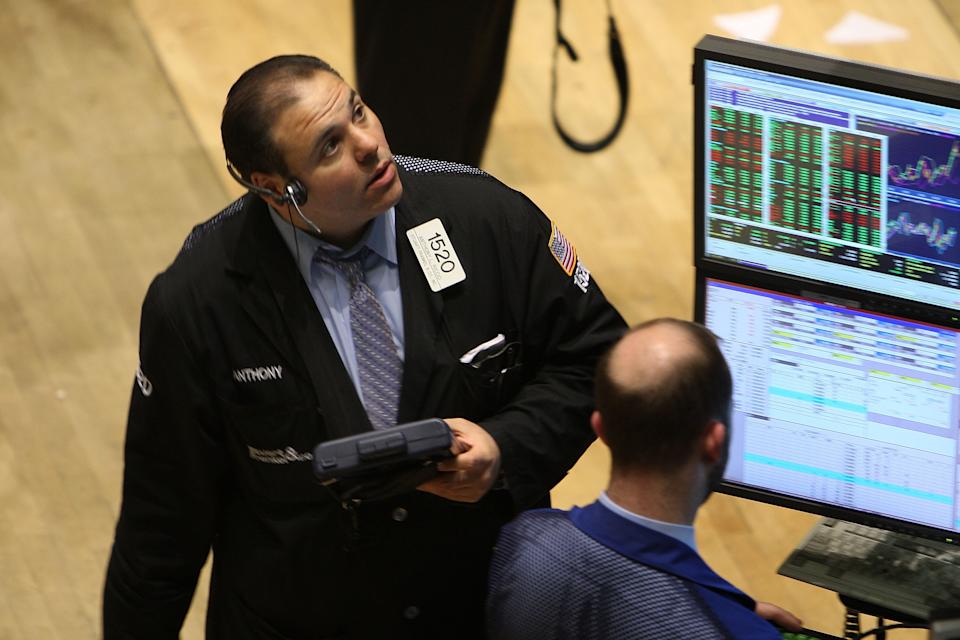 NEW YORK – APRIL 16: Traders work on the floor of the New York Stock Exchange moments before the closing bell on April 16, 2009 in New York City. The prior day, the Dow finished up gaining 95.81 points. (Photo by Spencer Platt/Getty Images)

After a strong year in technology (Nasdaq Composite up +43.6% in 2020), it is perfectly normal to see the market consolidate and correct those large gains. Coming out of these corrections, it is common to see another leg higher in the market, and there are three historical precedents that demonstrate that.

You might be thinking “What correction? The S&P 500 closed at an all-time high last week.” Please keep in mind I’m referring to growth stocks, which have clearly been in a correction since early February of this year.

The first example is 1995. That year, the Nasdaq Composite was up +40% and the rally continued into May 1996. After correcting close to 20%, the next move higher began in September 1996, and ultimately accelerated into the great bull market of the late 1990s. 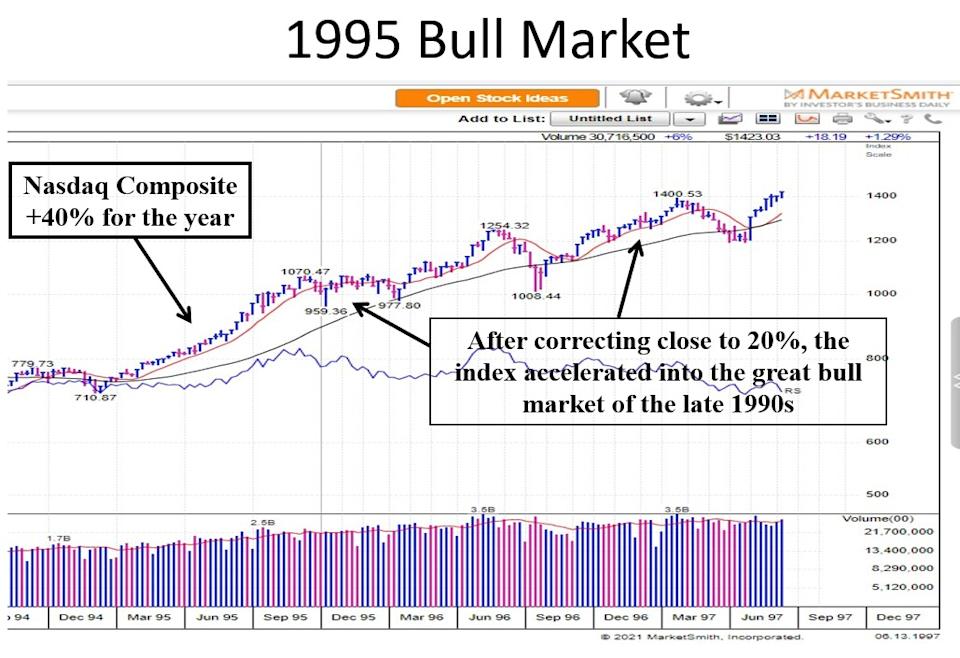 In 2003, the Nasdaq Composite gained +50% and eventually peaked in January 2004. After consolidating for seven months, the next leg up began in September 2004. According to Mike Cintolo, Chief Analyst at Cabot Growth Investor, “The upmove after that didn’t get far into new high ground, but it was an excellent stretch. That’s when Apple (AAPL) and Google (GOOG, GOOGL) really began their mega-runs.” 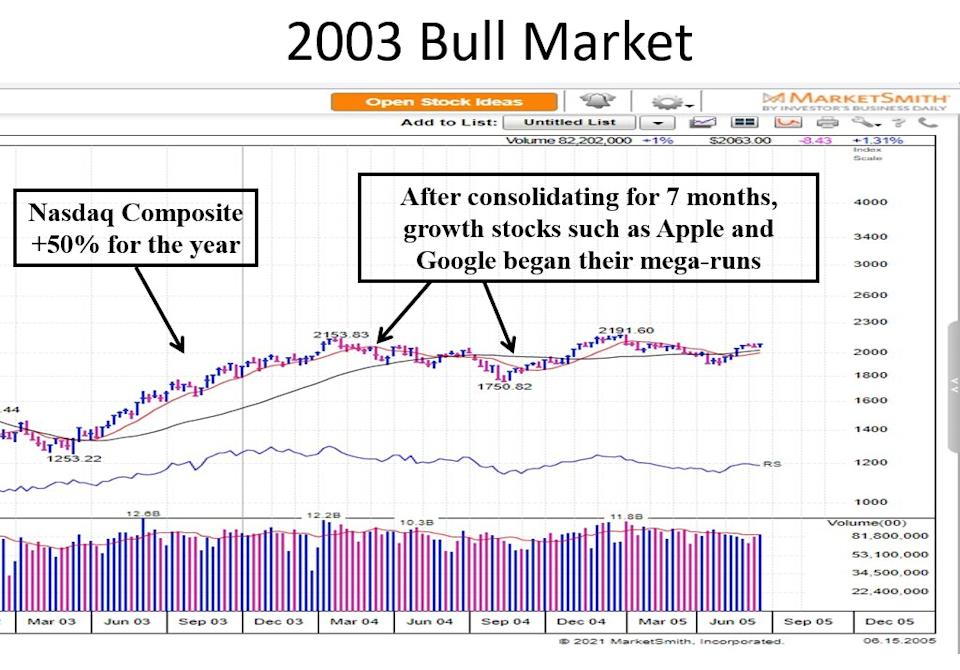 Finally, in 2009, the Nasdaq Composite rose +44% and continued into April 2010. After a four-month correction, the index resumed its advance in September 2010, and then gained over +30% into early 2011. More importantly, for growth stock traders, many stocks such as Lululemon (LULU) and Chipotle Mexican Grill (CMG) saw triple-digit gains during that run. 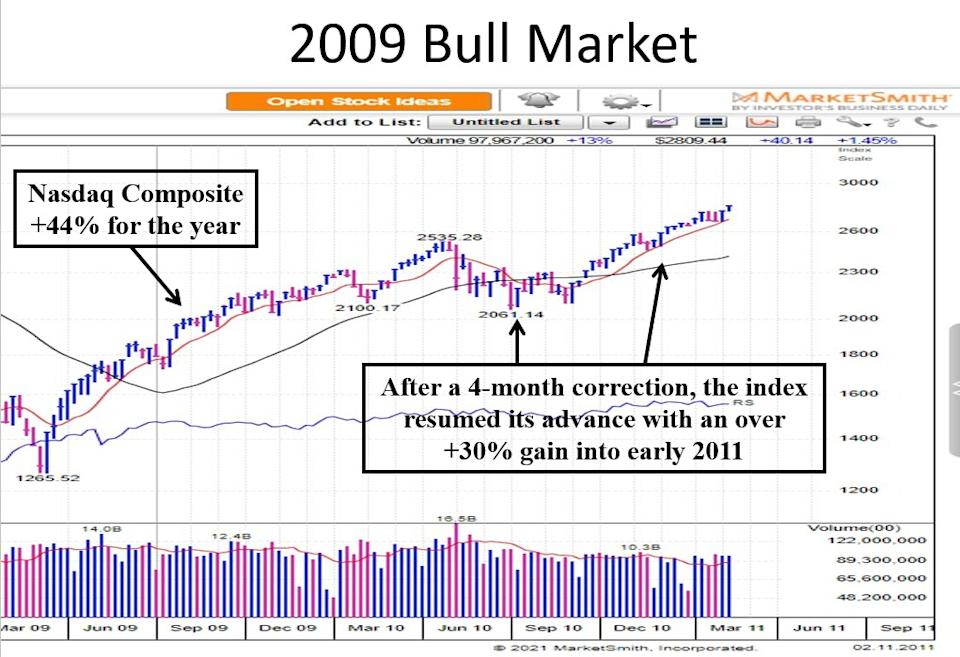 These three historical precedents provide a decent blueprint for today’s Nasdaq Composite. Last year’s gain carried into this year before peaking in February. Since then, the index has corrected for approximately four months, and is now looking to make another move higher. We still have to get through a few events in June such as the Fed meeting this week, the annual Russell 2000 rebalancing on June 25, and normal end of the quarter portfolio adjustments. There could be some volatility around these events, but eventually, it looks like technology is ready for the next leg higher. It could begin in early July as the market starts to anticipate the next round of earnings reports.

Regarding the upcoming Fed meeting, it seems like market participants have had the same fears before every recent meeting. They are worried the Fed will hint at “tapering” or slowing down their monthly bond purchases, and eventually map out a course for raising interest rates. Fed Chair Powell has made it perfectly clear that he will take his time with this process, and I don’t see anything being done until early 2022. Many people might disagree with the Fed’s actions because several economic measures are back to pre-pandemic levels; however, the Fed would rather be late in normalizing rates than early. Don’t argue with it — take advantage of this equity friendly environment.

If there’s an unforeseen event that causes the market to stall over the next few months, it’s possible the next leg higher could be delayed until the fourth quarter. Either way, I wouldn’t see any sustained downside because there’s so much liquidity in the markets, and sentiment gets very negative very quickly on any minor decline. For example, during the Nasdaq Composite’s -5% drop in early May, equity put buying spiked to levels not seen since late October, right before the last presidential election. From a contrarian point of view, this constant one-foot-out-the-door mentality helps to keep a floor to the market when overall fear rises.

Whether the next move higher starts in July or later this year, these three historical precedents show that we are likely to come out of the recent correction in technology with a new, sustained uptrend. Potential growth sectors to focus on are Semiconductors, Medical Products, and Software.

I can be reached at: jfahmy@zorcapital.com

Disclaimer: This information is issued solely for informational and educational purposes and does not constitute an offer to sell or a solicitation of an offer to buy securities. None of the information contained on this site constitutes a recommendation that any particular security, portfolio of securities, transaction, or investment strategy is suitable for any specific person. From time to time, the content creator or its affiliates may hold positions or other interests in securities mentioned on this site. The stocks presented are not to be considered a recommendation to buy any stock. This material does not take into account your particular investment objectives. Investors should consult their own financial or investment adviser before trading or acting upon any information provided. Past performance is not indicative of future results.